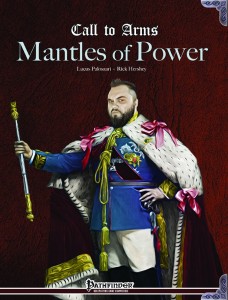 This installment of Fat Goblin Games’ Call to Arms series is a massive, huge beast of 94 pages, 1 page front cover, 1 page editorial, 1 page ToC, 1 page SRD, 1 page advertisement, 1 page back cover, leaving us with 88 pages of content – that’s A LOT, so let’s take a look, shall we?

Okay, we begin this installment of Call to Arms with a breakdown of what mantles are. Sounds strange? Well, it quite frankly shouldn’t be considered to be strange. Think about it – there is more to a mantle than just the cloth and material from which it was woven – as the pdf aptly demonstrates, wearing a mantle can denote more than just “the wearer is protected from the weather” – in real world history, mantles have often been used to denote status and ultimately, power. Sheer, brutal, in your face POWER – whether religiously or by the grace of the kings, a gorgeous mantle had its own weight, a kind of symbolic capital. Now picture what happens in a world where such options actually carry significance beyond the realms of the symbolic, a world wherein faith can literally move mountains and where authority can literally break the will of others – aye, there is untapped potential here!

Similarly, there are armored mantles, but more on those later – for now, let us focus on mantles vested in authority – thus, we have ranks like acolytes, civilian commanders, scholars and the like – all covered, with respective boons associated with the mantles. This is brilliant not due to the respective mechanical relevance, but due to the social relevance and the sense of immersion it enhances; basically, we have items that enhance a world’s inherent consistency here, with fluff, titles, etc. all there for your convenience.

Of course, this is not simply a book devoted to such prestige-mantles – we get concise tables of spell-level by class prices for mantles alongside a concise, easy to grasp break down of Item Creation of mantles. Obviously, specific magic mantles can be found within these pages as well – including cursed mantles and intelligent mantles…oh, and yes, mythic mantles – like the Lien of the Night-King…but what about the eponymous mantles of power?

You see, here, things become interesting indeed: A mantle is not necessarily only a physical vestment of authority – it has a symbolic dimension: We do speak of the proverbial mantle of authority for a reason. The pdf’s mantles of powers can be pictured as basically an item-based mini-template, as a kind of story-reward beyond what regular items would provide – and as such, their massive benefits do come with a hefty responsibility – and a CR-adjustment…as well as a “Geis,” for said power comes at a price…and requires investiture by a powerful being. Think of the mantles of power as particularly powerful emergences (See Imperiums CS), for example. Basically, these complex, exceedingly powerful mantles denote you as “the chosen one”, the champion of a deity, etc. and similarly, such power can also be used for antagonists: What if there are beings that successfully take the mantles of the Four Horsemen of the Apocalypse (not the writers!)? And yes, these mantles actually sport several abilities that interact with one another, allowing the wearers to consecrate weapons with their dread powers and tie them to their powerful tricks…and even better, there are ALTERNATE HORSEMEN mantles here as well…like anarchy or majesty, to give you two examples.

Oh, and have I mentioned the war of the seasons and the fey courts? Here, things become full-blown campaign setting/AP-style detailed: Much like Dresden Files’ depiction of the fey, various positions in the respective courts of the fey coincide with mantles of power – from queens/kings to heir apparent, knights and jesters, there are A LOT of mantles of powers here – for each season!

While summer and winter generally blend positions in court with suite-of-card like themes, spring and autumn have their titles aligned with opposing pieces of a chess set, sporting e.g. “rooks”. It should be noted that escalating mantles of general association and those highly prestigious mantles are all covered – basically, what we have here is a massive, template-based reward-system ready for your perusal that can be considered enough fodder for a whole campaign…or many of them. The significant level of power these offer may work btw. particularly well in low/rare magic item-campaigns. The significant ability-suites could offset the mathematical problems creeping in at higher levels to a certain extent. To give you a general idea of how long these mantles’ respective write-ups are: The CR+8 King of Autumn’s mantle covers more than 3 pages! And yes, the vast majority of this is CRUNCH. I am not kidding when I’m saying that these mantles can govern a whole campaign worth of material—or make for unique adversaries.

Oh, and there would be neutral parties that also receive 4 mantles and the Sidhe and mocking midnight Court templates/mantles to further expand the material.

Editing and formatting are top-notch – I noticed no significant array of glitches or issues. Layout adheres to a nice 2-column full-color standard and the pdf comes fully bookmarked for your convenience. The pdf comes with nice full-color artworks.

Lucus Palosaari delivers essentially a bait and switch pdf – I went into this book expecting an array of magic mantles…and they’re in here. But this book is so much more. The notion of mantles as a social structuring element is a brilliant “why has this not been done before?”-moment that made me cackle with glee. Obviously, I went into the mantles of power-section rather skeptical – the obvious power-increase being just nasty…but know what? This section is x campaigns and villains waiting to happen. The brilliant horsemen mantles will be wielded by champions of darkness in my game (or by the players…we’ll see…) and then, there would be the fey-mantles.

Okay, let’s get this out of the way: If you absolutely are not interested whatsoever in the whole war of seasons-concept, then you’ll lose a significant array of pages in this book: 47 pages, to be more precise, all of which are devoted to the fey mantles-come-templates for the respective positions and they are pretty much glorious: Granted, I am a bit of a fanboy for fey politics and unique effects and the blending of mythological, pagan tropes and the crunch here is very well-crafted. Moreover, we actually get information on the otherwise often neglected spring and autumn courts and, better yet, they receive their own mechanically-unique identities. Essentially, this is a whole campaign’s worth of unique rewards just waiting to happen and the investiture and geis mean that such mantles are not only hard to get…they’re also hard to keep. Just think what poor Harry has to endure since he went Winter Knight…well, some geis make that look downright cute.

I’ve been thinking rather hard on how to rate this book – the mantles of power themselves are utterly brutal and should obviously be handled with care…and this book is more of a narrative device than an item-book…but judging this book as an item book in the straight, traditional way would quite frankly be a disservice to the inspired material contained herein. I’d rather be positively surprised and inspired to make adversaries and extensive stories than have more replacements for cloaks of resistance that end up not being used.

From the low-magic end of mantles as a sign of office and authority to the high-end fey-court intrigues, this supplement offers some truly inspired options – just don’t expect a huge selection of vanilla magic mantles. That being said, this book is imho better off for its chutzpah of actually doing something radically different – hence, my final verdict will clock in at 5 stars + seal of approval.

You can get this cool toolkit here on OBS and here on d20pfsrd.com’s shop!
Endzeitgeist out.