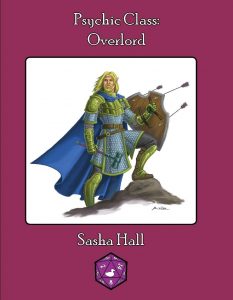 This class clocks in at 6 pages, 1 page front cover, 1 page SRD, leaving us with 4 pages of content, so let’s take a look!

All right, so the overlord class chassis consists of d10 HD, 2+ Int skills per level, proficiency with simple and martial weapons as well as all armors and shields, excluding tower shields. They gain full BAB-progression as well as good Fort- and Will-saves and at 4th level, he gains spontaneous Charisma-based spellcasting of up to 4th level, drawn from the bloodrager spell-list, though he casts the spells as psychic spells.

Overlords are somewhat powered by their own inflated sense of self-worth, and as such, at 1st level, they gain importance, which they may employ 1/day when in a combat encounter with a higher challenge rating than their class level as a swift action. This is a flawed little restriction – for one, I think the ability should be based on the encounter’s CR, not an individual component’s CR. Secondly, I am pretty sure that’s supposed to be character level, not class level. Otherwise, characters dipping into the class can more freely access the feature than those that invest several levels, which makes no sense to me. The ability grants the overlord a bonus to AC and atk equal to the difference between the CR and their class level, minimum +1. The ability may be used an additional time per day at 5th level and every 4 levels thereafter.

2nd level nets the overlord the first command. Commands can be activated as an immediate action and may be employed a number of times equal to 1/2 class level per encounter. *sigh* No, there is no cool-down between encounters, which means that my usual rant applies. Picture breaking into a room: You see one goblin sentry. If you eliminate him before reinforcements arrive, you can spam these; if the reinforcements arrive before the goblin’s eliminated, you still have the original 1-goblin-encounter array of per-encounter abilities. Makes no sense to me. Why not simply introduce a cool-down mechanic based on a non-fluid time-frame? Even Path of War uses the like. Anyways, unless otherwise noted, the commands grant bonuses or penalties based on Charisma modifier and an additional command is gained at 4th level and every even level thereafter.

Adding twice the overlord’s Charisma modifier, for example, would be one benefit – and it, in conjunction with a good ambushing set-up, can be pretty devastating. Penalizing defensive casting, temporarily suppressing conditions – there are some interesting options, though the suppressing of fatigue allows for the temporary negation of fatigue-based cooldown mechanics, which can be pretty wonky: So, let’s take a barbarian: Cooldown fatigue suppressed due to command, so what happens once the suppression ends? Do the rage rounds during cooldown stack? I assume, but I’m not 100% sure. Interesting: Making an enemy caster use +1 spell of the same level they’re casting; if none is available, the next lower spell level is used to determine the tax. This is superior to e.g. the defensive casting penalty, so it probably should have a minimum level. Weird: How does this interact with SPs?

Bringing flying creatures down sans save is imho too strong. Problematic from a rules-perspective: When not surprised, adding Cha-mod to initiative, which can be split among allies. Now RAW, you roll initiative and can’t use an immediate action until it was your turn, which makes the command, RAW, not work. The intent is clear, but yeah. Better movement, save bonuses etc. are interesting – but oddly, e.g. dazzling foes can also be found here. In short: The internal balance of the commands is all over the place, with several options vastly superior to others.

3rd level nets toughness as a bonus feat as well as adding class level to DCs to intimidate and demoralize the overlord. 7th level and every 4 levels thereafter nets a bonus feat chosen from a very restrictive selection. As a capstone, commands may be issued as a free action, even when it’s not the overlord’s turn (nice catch there!) and Charisma modifier-based benefits are increased by 2.

The class gets several favored class options for both the core races as well as some porphyran races and we close with a sample character at level 1.

Editing and formatting are very good on a formal level. On a rules-level, language and syntax generally are pretty good as well, though the class does run afoul of a couple of hiccups within the peculiarities of some of the rarer aspects. Layout adheres to a 2-column full-color standard and the pdf has no artwork apart from the cover. Cool: The pdf, in spite of its brevity, comes with full bookmarks.

Sasha Hall’s overlord is an interesting class. I like the self-importance angle and several aspects of the design here, though the based per-encounter-framework is something that rubs me the wrong way. Judging from diverse responses towards the topic, I am not alone in that. So yeah, I wish this employed a proper cooldown mechanic instead. More important for finding a final verdict, though, would certainly be the fact that the commands, the unique selling proposition of the class, wildly oscillate in power: Remember, these are reliable, no save, no SR debuffs/buffs that can be used with line of sight – you don’t even need line of effect! Considering the potency of some and the impotence of others, the whole section made me feel like it could have used more minimum level requirements for some and power-upgrades for others.

In the end, the class is not bad; certain groups will find the class to be fun and interesting. At the same time, though, I can’t unanimously recommend the class due to the work it imposes on rules-conscious groups. My final verdict will hence clock in at 3 stars.