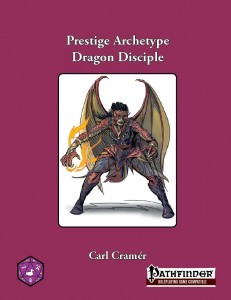 This installment of the Prestige Archetype-series clocks in at 9 pages, 1 page front cover, 1 page SRD, ~1/2 a page of editorial, leaving us with 6 1/2 pages of content, so let’s take a look!

All right, the Dragon Disciple receives 3/$ BAB-progression, good fort- and will-saves ,d10, 2+Int skills per level, proficiency with simple and martial weapons and light armors (no arcane failure in light armor and spontaneous spellcasting governed by Cha of up to 6th level, with the spells drawn from the magus-list.

At 1st level, the dragon discipline receives 1d4-damage dealing primary natural claws (1d3 if small). These claws increase in potency over the levels, later counting as magic etc. and increasing base damage-dice size and even add elemental damage to the output, depending on the energy of the breath weapon. More on that later.

At 2nd level, the draconic disciple also receives a bite attack, again a primary natural weapon, but one with a unique option – on a full attack, a draconic disciple can forego a bite attack in favor of casting a spell with a casting time of 1 standard action or less. Interestingly, the dragon discipline may opt to choose to take a penalty to all attack rolls and receive the same amount as a bonus to concentration checks to cast said spell defensively. The class can either first cast the spell or attack, but cast the spell mid-attack. He still needs a free hand and when mixing attacks with manufactured weapons. Alas, a minor glitch has crept in here – the option to improve defensive casting while attacking requires a caveat to specifically mention that the penalty applies even if the attacks are executed before the casting of the spell.

At 3rd level and every 3 levels thereafter, the dragon disciple also receives a bonus spell from a fixed list – a tad bit more versatility to choose from would have been nice. At 3rd level and every 3 levels thereafter, the disciple also receives an increasing natural armor bonus. Boosts to attributes (fixed) are gained at 5th, 8th, 14th and 20th level. Resistance to the breath weapon’s energy type is gained at third level and scales up to 15 at 15th level in two steps. At 4th level, aforementioned breath weapon is gained; Its uses per day scaling up to 6/day at 19th level, thankfully coming with a cooldown that prevents going nova with the class level x 6 damage dealing breath, the shape of which btw. is determined by the type. At 6th level, a specialized spellstrike that only works with the bite attack is gained – here special kudos for preventing dual casting confusion via the bite’s regular potential substitution! At 10th level blindsense is also pretty appropriate. High level draconic disciples can assume Form of the Dragon I at 13th level, increasing the potency of the form every 3 levels thereafter, analogue to the improved versions of the spell. Wings are gained at 15th level and the 20th level immunities gained are solid.

We also receive FCOs for the core races and a sample NPC in progressive builds of levels 1, 5, 10 and 15.

Carl Cramér’s Dragon Disciple is a surprisingly nice take on a PrC by now utterly outdated, rendering the transformation into a humanoid dragon-like figure into a concise, well-crafted whole. The spontaneous casting + magus-like tricks in the arsenal of this class render it an interesting evolution. The potential for blasting disciples is massive, though not as pronounced as if it had access to the wiz/sorc-list – essentially, this is a dragon-themed alternate magus and one that admirably well captures what the class is supposed to do: If a dragon disciple elects to let loose its arcane fury, you won’t be wanting to stand on the receiving end. That being said, the restrictions imposed by the design maintain it as a kind of glass cannon and the significant loss of overall flexibility (no spell recall due to spontaneous casting, no knowledge pool, no arcanas) when compared to the magus makes for a valid trade-off for the draconic abilities gained. Over all, a well-crafted take on the concept with one minor wording that could have used some more refinement – still, a cool little pdf, well worth 4.5 stars – now one thing is slightly nasty: The increased spells per day and better on the spot versatility make the class a tad bit better at blasting, which may prove to be a bit much for low-powered gaming…hence I’ll round down to 4 for this one, though remain with an explicit recommendation.

You can get this nice take on the dragon-themed melee-mage here on OBS and here on d20pfsrd.com’s shop.