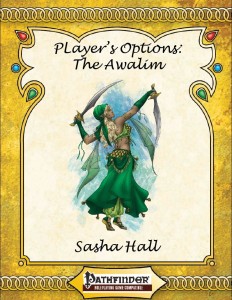 This installment of the Player’s Option-series clocks in at 9 pages, 1 page front cover, 1 page editorial, 1 page of SRD, leaving us with 6 pages of content, so let’s take a look at the Awalim!

So what is the Awalim? On a crunch-level, the class receives d8, 4+Int skills per level, proficiency with simple and martial weapons and 1 exotic weapon of her choice and her dancer’s outfit (which is weird, since the outfits are not armors) and also 3/4 BAB-progression and good ref- and will-save progression. Depending on the base dancer’s outfit chosen, the awalim receives an additional class skill. The awalim’s elegance also acts as a kind of armor – she receives her cha-mod as a dodge bonus to AC, twice that amount against targets that potentially are attracted to her, but only if the target has an int over 3, making her susceptible towards unintelligent creatures. At 2nd, 8th, 12th and 16th level, these bonuses increase.

At 1st level, an awalim selects 3 dances and at 3rd level and every odd level thereafter, she receives either an additional dance or increases the power of one dance she already knows. These increases do require certain minimum levels, though. To use a dance, an awalim has to succeed a perform (dance)-check versus 10 + ( 5 x the dance’s grade) as a full-round action AT the end of a dance, she receives the effect called infusion assigned to the dance, for a number of rounds equal to the awalim’s preceding dance. Once an awalim has failed an amount of Perform (Dance)-checks per day equal to her cha-mod, she needs to rest to regain her use of dances.

Endure Elements is part of the deal and at high levels, natural attacks and touch attacks (but oddly not unarmed strikes – an oversight?) result in cha mod x 1d6 untyped damage, save halves – which is nasty. Vastly improved aid another and a dance-effect doubling capstone round out the class.

Now dances – what do they do? Now that question isn’t as easy to answer as I’d want it to be – each dance features an “inspiration” and an “influence” for each of the grades of the dance- alas, the dance-ability does not establish this terminology, which leads me to the following deduction – inspirations generally provide passive benefits, influences active ones like claw attacks etcetera. Alas, here the class breaks apart – claws that do not specify whether they are primary or secondary natural attacks, effects that read ” DR 1/cold iron for each point of Charisma bonus you”[sic!]- where’s the end of the sentence? Acid spit that does not specify whether it’s a ranged attack, ranged touch attack or splash? Yep. All of these. Plus – the effects imply that the awalim CAN do things while dancing, which contradicts the mechanics to maintain a dance. The central feature of the class, alas, does not work…at all. Specifying what kind of “reposition” one of the dances delivers…I could go on for ages. Utterly broken.

A total of 11 different feats for additional outfits, energy resistances, extending attractions to all members of a creature type, decreased perform-DCs for a dance and better damage etc. output with weapons or bonus energy damage with ranged weapons – generally, a solid selection. Lying in sunlight to regain hit points with a solid limit also makes for a cool idea. On the other hand, attacking via the heal skill is broken – skills as attack rolls adhere to a different system. I won’t repeat my rant on how easy skills can be gamed in Pathfinder, just know that this feat does not work as intended in the hands of even a moderately gifted player.

The pdf also comes with a nice sample level 1PC.

Editing and formatting are good, if not perfect -a tad bit more streamlining regarding the rules would really help this class. Layout adheres to PDG’s printer-friendly 2-column b/w-standard and the pdf comes fully bookmarked in spite of its brevity – nice.

Sasha Hall’s Awalim, a kind of battle-belly-dancer is conceptually glorious – the idea of the class rocks, but the class does require some serious work – the central mechanics of the class does not work at all as intended and needs serious fixing and alas, the same extends to some of the balancing – double attribute modifier to AC can be easily gamed, but the MAD of the class makes me see past that. Still, this one feels very much like a gem in the rough – the terminology and actual central mechanic need clearing up, but once they work, this will be a nice class to play. My final verdict will hence clock in at 1.5 stars, rounded up to 2 stars for now, with the explicit note that once this class works as it ought to, it’ll probably find a home in the upper echelons of my rating system.