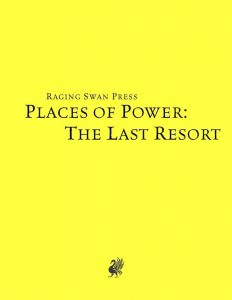 Speaking of diverse: This pdf follows the expanded formula of the newer Raging Swan Press offerings, meaning that we get tailor-made adventure-hooks for a wide variety of the different locations. What about a quest to get a lily straight from the abyss or a murder investigation, which certainly should be interesting in this place? With the chiefs of the inns being high-level beings, magic is pretty dominant, and the place actually does represent that in a few details, which can offer tangible benefits. In the system neutral version, it is obvious that these, much like everything else, is left closer to the preferences of the GM. Still, I couldn’t help but feel that this renders the pdf slightly less meaty.

Editing and formatting are top-notch, I noticed no issues on a formal or rules-language level. Layout adheres to Raging Swan Press’ elegant two-column b/w-standard and the pdf sports really nice b/w-artworks and cartography. The pdf comes in two versions, one optimized for the printer and one optimized for screen-use. Kudos! Both pdfs are fully bookmarked for your convenience. References have been properly adjusted to reflect old-school terminology, i.e. “magic-user” instead of wizard, etc.

So yeah, all in all, I heartily recommend this if you need an unobtrusive minor planar hub/means to get the PCs somewhere/way of introducing strange critters. Now, relevant for old-school groups that play a bit closer to the gritty edge of the spectrum, would be the note that this is very much high fantasy, if the summary did not drive that home. That’s not a bad thing in itself, and personally, I do enjoy this – but if your gaming world is rather low-key, then you should be cognizant of this very much being planar in power-level and scope implied for the respective innkeepers. All in all, I do consider this to be a very good system neutral version, one that only leaves me with cosmetic complaints in direct comparison to the other versions, which is why my review will clock in at 5 stars.