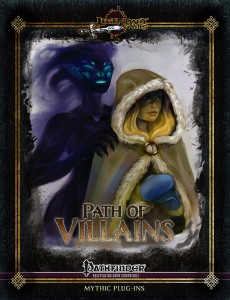 The second book in Legendary Games’ Mythic Paths-series clocks in at 28 pages, 1 page front cover, 1 page editorial, 1 page ToC, 1 page SRD, 3 pages of how-to-use/introduction, 2 pages of advertisement, 1 page back cover, leaving us with 18 pages of content, so let us take a look, shall we?

So, a good villain – every DM knows that the opposition is just as important as the heroes – and personally, my love for them can probably be attributed to reading too many great stories as a child: Batman is cool, but the Joker? He’s just awesome. Superman? Nice, but Lex Luthor is damn impressive as well…what’s Spidey sans Venom or Doc Oc? Yeah, so what we have here would be a handy assortment of guidelines for DMs to help ensure that their villains are just like that – memorable.

Now unlike what you’d expect, we essentially get a so-called villain path – which is essentially a virtual path that can just be used to supplement the usual path of your villains – i.e., yes, any mythic villain can scavenge these, even if s/he/it already has the Dual Path ability. However, it *is*treated as a path for the purposes of path-modifying feats. Got that? Now here’s the cincher – there is a different suggested table for villains with mythic tiers and one for villains with mythic ranks -and yes, handily internally linked lists of abilities by tier are provided – one click and the pdf jumps to the ability – extremely comfortable to use! As a note for designers – while it’s not as important for homebrew DMs (though they’ll appreciate it) – each ability also sports the place and format for the statblock! Nice, since it maintains consistency!

Know those times when you are tempted to fudge the dice? When a player’s lucky crit kills off your BBEG when it shouldn’t? Well, what about reflexive revival? Not enough? What about returning from the grave a day after being slain? Yes, these are damn cool abilities! Not enough? What about revival as a vampire, revenant or similar, dead and nasty creature? Reflexive fast healing, mythic power-theft, storing mythic power in backup simulacra or clones… oh yeah. What about a deal that may see outsiders coming to claim the soul after the villain’s demise? Or perhaps, your villain can talk to the living even after death, instructing them with the details required for his glorious return?

Using mythic power to make superb escapes (including drinking potions and temporary mobility-enhancing feats) and to negate damage are also great to ensure your villain survives a defeat – but ignoring abilities that would prevent an AOO will make your players hate them. Glorious! In cool synergy with mythic monsters, gaining a crowflight carriage is pretty neat! Being impervious to non-mythic, otherwise defense-bypassing tricks is also something neat – just gloat into that paladin’s face as his smite evil poofs harmlessly against his defenses. Want to a reincarnation of an ancient evil? You can! Or perhaps, your villains need an additional trick to get rid of debuffs à la bleed, confused, etc. – what about a mythic power-based counterspell that also works with abilities which allow the villain to negate certain things? Yeah, pretty much awesome.

Also absolutely awesome – utterly breaking the mind of captives, turning them into your slaves, beholden as per the vow of obedience feat – the concise, easy mechanics for this help what can be considered massive, diamond-studded, narrative gold. Speaking of which – if the PCs are foolish enough to tackle a villain with “Triumph of the Will” by outnumbering him, they’ll quickly notice that his annoying trick to reroll and force rerolls just got even worse – nice rationale for “I have to do this alone!” Oh yeah, capstone villains can reduce even those immune to fear to cowering heaps.. Have I mentioned the option to counter the expenditure of mythic power, best graced with a “Two can play this game!”, “Denied!”, “Your tricks can’t stop me!” or similar phrase. Glorious!

Speaking of which – what about receiving 1 + 1/2 tier swift/immediate actions per round? In the hands of the right class, this ability alone may help one villain stand against a significant majority of foes…Love it!

And if the villain one day has to die – what about dishing out a massive hereditary curse? And yes, that one can imho also spawn campaigns!

Editing and formatting are top-notch, I noticed no glitches. Layout adheres to Legendary Games’ two-column full-color standard and the pdf comes with various nice pieces of full-color art, though Legendary Games-fans will know them from previous offerings. The pdf comes fully bookmarked for your convenience and has handy internal links for maximum comfort in navigation.

All right, let’s face it – PFRPG is geared more towards dishing out damage, less so taking it – defenses and staying alive are harder than dealing obscene amounts of damage, an issue exacerbated by the numerical escalation that is part of the mythic rules. This pdf is the answer (or at least one possible answer!) – with a huge array of awesome, flavorful abilities that increase the villain’s staying power, help keeping the BBEG alive and even provide Plan Bs when he’s slain, this pdf, as a toolkit, is not only useful for mythic games, but also for regular ones – though in either case, I wholeheartedly enjoyed the diversity and vast power of the respective tricks herein. While I’d generally wouldn’t recommend putting this into player-hands due to a plethora of extremely powerful tricks made to offset the odds between party vs. one guy + henchmen, there is one example, where I would not want to miss this – WotW #6, endgame. Negate the “limiter” introduced by the story and let the PCs with their contingencies duke it out -no harm done: If they die, after all, they can always come back…

In one word – this pdf offers the favorite tricks of all our fiction and comic book villains – superb escape stunts, powerful options to fight another day, superb planning and yes, even heel-turning good allies of PCS…this is THE mythic villain’s toolbox and should be considered a must-get purchase for any DM running a mythic game – your carefully crafted adversaries will last longer and garner more loathing, more influence, more power with the tools herein. I love this book and as such, I will rate it 5 stars +seal of approval – congrats to Jason Nelson and Clinton J. Boomer! Note, however, that I do NOT consider it a good idea to hand this over to player hands unless in very specific circumstances – these options are exceedingly powerful and made for the DM to cackle with glee.

You can get this awesome kit of villain tricks here on OBS and here on d20pfsrd.com’s shop!