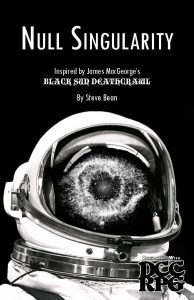 I can review this book in one sentence: Black Sun Deathcrawl, Scifi-edition.

…I jest, of course. Partially. I assume familiarity with my review of Black Sun Deathcrawl in the discussion below. If you haven’t, please take a look at it. You can find it here.

You see, Null Singularity does note on its cover that it’s inspired by Black Sun Deathcrawl, and the author has actually asked Black Sun Deathcrawl’s (I’ll shorten that to BSD below) creator for his blessing – a brief interview can be found in the back of the book, spanning two pages.

And indeed, in a way, Null Singularity does imitate BSD in several obvious key components: The ominous flavor-text used to establish tone and setting? Check. The slightly obscure, doom-laden introductory scripture that invites individualized exegesis to fill out details? Check. The unstoppable, all-encompassing threat, coupled with a theme of futility and nihilism? Check. You get the idea – there are a lot of similarities, quite intentionally so.

However, there also are plenty of differences that mirror the science-fiction context and that influence, rather significantly, the tone and experience of playing this game. In a way, it is nigh impossible to discuss Null Singularity without spoiling some parts of it – before I get into the “story”-related components presented within, I will add another spoiler-warning, but in order to discuss it and how it diverges from BSD, I have to explain a couple of things, so if you want to go into this as a blank-slate experience for maximum efficiency, stop reading NOW and skip ahead to the conclusion.

Okay, only judges around? Okay, so a key difference of this supplement and BSD would be focus. BSD is very much a game of savagery, one wherein struggle for survival is often brutal on a physical and emotional level. Null Singularity is similar in that it gets rid of classes and races – there only are the Voidants (character sheet provided in the back). The Null-Singularity is basically consuming everything, a thing beyond even the Singularity as an event, something beyond the infinite, crushing in its endless inevitability – it is, to quote the pdf, “EveryWhere and EveryWhen.” Voidants, life, learned F/Utility aboard their VoidArks. There is just the mission. It has no parameters.

Voidants roll 3d6 for ability scores, get 1d6 +1d4 +2 for Stamina modifier hit points, and one ability is raised to the lowest score that improves its modifier. Voidants act, functionally as thieves, substituting the thief skill that works best for using a scifi item/accomplishing a task: Find Trap to diagnose malfunctions, etc. Alignment is randomly rolled, and each PC begins play with a Void Zoot, Oh-Too Well, Squawk Box, VoidZeal, HydraCycler, HeatPak, Battery and Ration (Ize-Kreem Brik and Or’nge-Flave Powder). You get a d12 roll for additional equipment, and you roll 1d4-1 to determine how many pieces of equipment are malfunctioning; then, a d12 to determine the extent of the malfunction. Every 30 minutes real time, every piece of equipment with failure imminent will be destroyed/shut down. Also, every PC rolls a d6. On a natural 1, one piece of survival gear will malfunction – for every additional 30 minutes passing, you ADD another d6. If you roll all sixes, you find a salvageable piece of gear.

Resource Fullness is also on a timer: Every 20 minutes real time, all players mark off half a box of Oh-Too, H2O and Battery Pak (for heat). In any round that a PC has zero Oh-Too, H2O or Battery, or a malfunctioning Void Zoot or HeatPak, the PC MUST burn one point of Resource Fullness.

PCs may steal Resource Fullness from other PCs and monsters.

Okay, this is the basic rules-chassis, and it is radically different from BSD. It isn’t focused on exploring the dynamics between PCs and Hope, about what it’ll take for them to give up. This is not, like BSD, an attempt to depict the experience of depression or other such metaphysical experience. Instead, from language to rules, it is focused on one thing “F/Utility.” The duality encompassed in this term is stark and reverberates through the entirety of the supplement: For one, Voidants being thieves in functionality places a greater emphasis on trickery and adds options to their array, at least when compared with BSD’s Cursed.

The language, as you could glean from the equipment names above, depicts a clever evolution of terms, which adds a distinct feeling of both estrangement and familiarity – like many contemporary scifi books, it thus manages to enhance immersion. From the rules, you will have noticed one thing: The voidants are horribly fragile, and unlike the Cursed, they can, and will die without their consent mattering in the least. That there is the central and most important distinction: Beyond the scifi-theme, which, by font, language, etc., evokes a stark and harsh sense of clinical detachment, the central theme and goal of this game is radically different from BSD: This is a game of survival and doing whatever it takes; it is indebted to BSD, yes; it is similar in many components, yes. It’s a wholly different playing experience nonetheless.

Since the launch of the VoidArks, XenoData has been collected, which is represented by stats for the XenoPhases encountered so far – these include GravSpectra, malevolent fields of gravity; silicate, maggot-like things that leech heat and fungal masses that consume Otoo. Quantum fluctuations caused by the Null Singularity represent hazards based on spell effects, and among these, there also would be StarkReal – basically, the madness engine of the system. And, there would be XenoHorrors. In a way, this feels like a better realized mini-bestiary/hazard array to complicate matters…but this is also where Null Singularity drastically diverts from the course of BSD.

The following is slightly more SPOILER-laden that before. I strongly suggest that players jump ahead to the conclusion.

Know how I basically told you that the encounters in BSD, with one exception, pretty much sucked and probably should be ignored? Yeah, well Null Singularity goes a different route. The second half of the book is devoted to basically the adventure – we have massive read-aloud texts and a sequence of challenges that a judge could expand/develop further, if desired. It is here, where you can choose to play Null Singularity not as a customizable campaign template, but as a linear one-shot module, and honestly, it’s a pretty amazing series of encounters that we get here. The descriptive text really drives home the atmosphere of F/Utility suffusing the game, of the nightmarish existence depicted within. To quote from the introductory read-aloud text: “You were brought into being aboard Alektryon and you’ve spent 99.1968% of your life inside It. LifeDatum: you spend most of your time in SomniStays-Iz to help conserve resources. You hate it. In SomniStays-Iz you dream endlessly about the Null Singularity. Occasionally, you Re/Sur/Vive. And then, it happens. The VoidArk is experiencing catastrophic PlanetFall.”

I am not going to explain the entirety of the plot here, but the F/Utility angle reaches its culmination in the end, when the book basically closes a loop, one that may not restract, but actually become worse. True to the focus on Survival, it is thus theoretically possible to replay this scenario over and over – to survive it. Null Singularity, within its bleak parameters, may be “won.”

The pdf does btw. offer an appendix for inspiring media.

Editing and formatting are very good, I noticed no significant glitches. Layout adheres to a landscape, one-column b/w-standard, with the pdf using plenty of thematically fitting stock-art to enhance the stark atmosphere of the experience. Much to my chagrin, the pdf-version has no bookmarks, which makes navigating the pdf a colossal pain – a serious comfort detriment. I strongly suggest printing this or getting a print copy. I can’t comment on the merits or lack thereof of the print version, as I do not own it.

Steve Bean’s “Null Singularity” is more than Black Sun Deathcrawl in space – and that is quite a feat, considering the shared themes and obvious homage to the latter. In theme, this feels like someone took the black metal band Darkspace and wrote a game as bleak and uncompromising as their devastatingly bleak sound. The suggested bands in the appendix (Pink Floyd, Husker Du and Philip Glass) or acts like Mare Cognitum, imho, do not capture the mood half as well. The stark science-fiction backdrop is uncompromising in its vision, and the threats, the constant experience of malfunctions – they render this one brutally-tough game with a singular, most efficient vision.

And this brings me to the point that differentiates this most from Black Sun Deathcrawl, at least for me: While the trappings are similar, the function couldn’t be more different. Where Black Sun Deathcrawl, arguably, is more artwork than game, more experience than RPG, Null Singularity is, very clearly and distinctively, a game – a game of resource-management that shares themes and bleakness-levels with BSD, but a game that may be won – in a manner of speaking. Kind of. As a piece of game design, it is clearly superior in that its plot and playing experience is, by design, more differentiated. This, however, also means that it can’t duplicate the sledgehammer-like impact, the psychological intensity, of Black Sun Deathcrawl. I don’t think that this would trigger most folks, for example. So yeah, whichever of the two you prefer is ultimately up to what you want from the experience – or, as one of my players remarked, of “…how much of an RPG-hipster you are.”

Black Sun Deathcrawl manages, like e.g. Hellblade: Senua’s Sacrifice did for psychosis, to depict, in a gaming context, how it can feel to live with depression.

Null Singularity does not attempt the like. Instead, its thesis could be summed up as follows: “Look, this is how you can make an experience like Black Sun Deathcrawl behave more like a game without losing the emergent storytelling from a super-bleak setting.” In a way, it re-gamifies the aesthetics of Black Sun Deathcrawl and creates something that is truly and wholly distinct from its parent. Beyond the different setting, Null Singularity is probably more fun for groups that like to see if they can “beat” or “endure” or “survive” something. It is more fun than Black Sun Deathcrawl, courtesy of the frantic resource consumption mechanics. On one hand, this makes it the better game; on the other, this means that it can’t, at least for me, reach the level of impact that Black Sun Deathcrawl had.

But what does it mean? Well, ultimately, in the face of the Null Singularity…nothing, of course. Only you can decide what meaning is, as a concept, to you and yours, only you can ascribe meaning, quantify and qualify your priorities and that of your group – whether you prefer this or Black Sun Deathcrawl is a matter of aesthetics and what you’re looking for.

As a reviewer, I consider Null Singularity a resounding success – it could have just been a lame clone of Black Sun Deathcrawl and instead created something wholly and radically distinct. While the lack of bookmarks hurts the book and makes it lose half a star, I still arrive at a final verdict of 4.5 stars, which I will round up for the purpose of this platform. This also deserves my seal of approval.

You can get this unique game/one-shot here on OBS!

Want this in print? You can find the contact information to order it here!