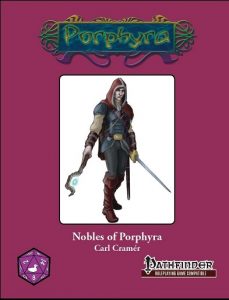 So…guess what – this actually is a prestige archetype book, one that takes the noble scion PrC and codifies it as a proper 20-level base class, though the set-up herein is obviously more versatile in this one – but there is more to this book than that: Beyond extensive observations regarding what it means to play a noble and the wealth available to them, the noble scions do receive a significant stipend each level, to be precise 750 gp times the class level and bonuses to skills according to the respective families they have and areas they belong to – it is here that the “of Porphyra”-component comes into play: The pdf provides a balanced, varied list of diverse regions of the setting for your perusal.

Beyond the aforementioned stipend, the nobles also get a weekly allowance of non-monetary favors equal to 25 gp times class level for top theatre seat, great rooms, etc. – this is known as prestigious influence. Unspent favors from this allowance do not stack, thankfully. At 3rd level, noble scions receive +1/3 class level to Diplomacy, Intimidate, Knowledge (Local) and Knowledge (Nobility) – this ability is called fame and fortune and 4th level nets an expert cohort called servitor…and no, he does not fight. 7th level nets Leadership and at 13th level, a cohort can be one level lower than the scion and all followers increase their levels by +1, with 19th level providing a cohort at the scion’s class level and followers increasing their level by a further +1. As a capstone, these guys can roll twice on the appropriate social skills and 1/day treat one such roll as a 20.

So that is the basic framework – and it already is much more solid and feasible than the problematic aristocrat-NPC-class. This framework out of the way, we are introduced to the respective variants of noble scions: The first here being the bloodline scion, who gains 1/2 BAB-progression, d6 HD, good Will-saves and 4+Int skills as well as some basic proficiencies. Bloodline scions receive a sorceror bloodline and spontaneous Cha-based spellcasting of up to 6th level as well as related benefits: Bloodline feats at 6th level and every 6 level thereafter, with bloodline power progression at levels 1, 3, 9 and 15, with the capstone being exchangeable for the aforementioned general noble scion capstone. The class gets Eschew Materials at first level. The pdf does provide a CR 10 bloodline scion/wildblooded-sample character -each of the versions herein does sport such a complex sample character, all with detailed background stories…and, rather cool, there are quite a lot of neat full-color artworks here!

Similarly interesting – the chevalier takes the cavalier class and applies the noble scion – for full BAB-progression, full proficiency, d10 HD, good Fort-saves, level 1 mount and challenge, with well diversified class abilities – Banner at 5th level, tactician at 1st., etc. – all in all, this one is smooth and well-crafted.

The enlightened noble, with 3/4-BAB-progression, proficiency with simple weapons, light armors and rogue-y weapons, 8+Int skills and d8 HD alongside good Ref- and Will-saves. These guys are based, roughly, on the investigator. The class receives full studied strike progression and studied combat and applies inspiration to the nobility-themed skills instead – once again, a neatly-crafted variant/hybrid! Similarly, should you prefer a more rogue-y focus…well, the scheming noble, with a similar chassis, instead applies this design-paradigm and combines it with rogue talents, sneak attacks etc.

The hierarch cleric gets 3/4 BAB-progression, good Fort-and Will-saves, d8 HD, 4+Int skills per level, proficiency with simple weapons, sword cane and fighting fan and light, medium and heavy armor as well as with the deity’s favored weapons. This one would be the Wis-based prepared spellcaster with full spellcasting progression of up to 9th level. On a nitpicky, aesthetic point – the spellcasting/aura/etc. entries often read “cleric” instead of “hierarch cleric”… Yeah, I’ll punch myself now for that one. It’s needless nitpickery. And no, these guys do not get channel energy.

The monster scion is based on the summoner class, with 3/4 BAB-progression, good Will-saves, d8 HD, 4+Int skills, proficiency with simple weapons, lance, long sword, rapier and light + medium armor, which do not provide arcane spell failure. They are spontaneous spellcasters via Charisma and gain up to 6th level spells. These guys get a hereditary eidolons – which are native outsiders and cannot be summoned. They are pretty hard to kill, gaining full HP into negative HP, but, upon being killed, need to be replaced via a ceremony and some time. Cool: Fame and fortune can later be applied to outsiders and the ancestral eidolons introduced herein get new evolutions for dual creature types, becoming extra-dimensional, fluid growth between sizes – all in all, neat.

The noble virtuoso gets d8 HD, 3/4 BAB-progression, good Ref- and Will-saves, 6+Int skills per level, proficiency with simple weapons, longswords, rapier, sap, short sword, shortbow and whip as well as shields and light armors. They get access to bardic spellcasting (via Cha, obviously) and free spellcasting sans penalty in light armor. The class receives, obviously, bardic performance progression, 10th level jack of all trades, etc. – all in all, solidly dispersed ability arrays here – but at the price of bardic knowledge and lore master.

The Renaissance Man, at d8 HD, good Fort- and Will-save progression, 3/4 BAB-progression, 2+Int skills per level, proficiency with simple and martial weapons as well as light armor. This one gets Int-based spellcasting from the magus spell-list, 1st level arcane pool, 2nd level spellstrike, 4th level spell combat, 5th level spell recall and arcana at 3rd level, +1 every 3 levels thereafter. Medium armor, however, is delayed to 14th level and similarly, the hybrid does pay a price regarding the regular magus-progression.

Editing and formatting are very good on a formal level and also rather precise on a rules-language level. Layout adheres to Purple Duck Games’ two-column full-color standard. The pdf sports several beautiful full-color artworks and the pdf comes fully bookmarked for your convenience.

This book was much more work than the relatively brief review here may show – basically, it represents a significant array of hybrid classes between Noble Scions and a significant assortment of classes. The interesting component is that the pdf manages to get the WBL-increase and small favors afforded to nobility done rather well: The respective changes made make sense and, when compared to the base classes, provide a distinct identity that is similar to, but not identical to the respective base classes. The concept is interesting and there certainly is more than one set-up for a campaign that makes sense with one or more player characters belonging to the nobility – I know I’ve had such a set-up planned for quite a while.

Beyond solid crunch, Carl Cramér’s nobles of Porphyra (with additional design by Justin Sluder and August Hahn) also sport a significant array of interesting characters – for a more than fair, low price. Nice crunch, cool fluff – what more could one ask for? In fact, one can, arguably, make one’s own additional noble scion-hybrids by extrapolating from the classes provided here and using the general noble scion tricks in this book. All in all, this is a nice, cool pdf and well worth 5 stars.

You can get this nice book here on OBS and here on d20pfsrd.com’s shop!