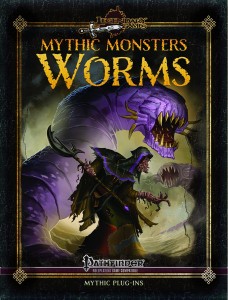 This time around, the installment of mythic monsters begins with supplemental material fans of Dune may appreciate – mythic feats intended for WORM-RIDING! Handling of worms? Check, including mythic power boost and extension to the creature-type – d’uh. Riding worms? Check as well -again, with a mythic upgrade of the feat, for your convenience. And yes, this IS the most concise way of handling riding worms and the like sans suffocating immediately, drowning, etc. I’ve seen in ages – love these feats! This, however, is not where the pdf stops – we also get the new worm domain, which includes a wormy sanctuary, tremorsense, etc. – and have I mentioned the stats for remorhaz, purple worm etc. companions for use with the new feats? Yes, awesome.

But we’re not here for the supplemental material, cool as it may be, are we? So let’s begin -with a wormy demon, the Vermlek at CR 4/MR 1, -not only can these beings implant themselves into corpses, they may even utilize the knowledge of the fallen they inhabit against their adversaries. This and their gruesome, gory exit from bodies render them great body invasion/creepy critters and a neat example for good low-CR critter design. At the same CR/MR, gricks can cause unpleasant diseases and even cause paralysis – solid, but kind of unremarkable upgrade here.

At one CR and MR more, the mythic FLAIL SNAILS receive better mucus, slimy runes, stunning attacks and slimy ropes – what can I say, but FLAIL SNAIL, baby – just love these guys! Better, though, would be the leech swarm upgrades – healing via blood drain, horrific body intrusions and clinging drain that stays with the victims – beautiful and deadly and what the leech swarm ought to have been capable of in the first day – yay! Now I’m going to use this and the giant file and gruesome giants to make leechwalkers, Demon Souls-style! The more mundane giant slugs (CR 10/MR 4) can use mythic power to spit acid in a spread and have a body so sticky, that weapons may adhere to it.

On the high end, CR15/MR 6 frost worms can use mythic power to amp up their coldness to staggering levels and they may utilize their hypersonic trills to cancel out magical silence – coolest, though, would be the option to call down a giant avalanche, potentially changing the terrain beyond the immediate deadly power of the attack itself – and yes, in other terrains, the effects are different. At 1 CR higher the purple worm-build not only uses a feat provided in the build (from Mythic Minis: Feats of grappling), but also get a powerful crush. Cooler, though, would be the ability to assault foes and drag them with them into their tunnels, potentially burying foes alive in the process – finally! Big tunneling worms ought to have had this capacity from the get-go. Two thumbs up! Finally, at CR 19/MR 7, one of my favorite critters ever, the neothelid not only receives full capacity of a sage, but also may use mythic power to store energy -worse, they can blast said stored energy at foes or charge its own attacks with it – it’s the gauss-ring-style neothelid – love it! Have I mentioned that it uses the giant template (alternate sans it provided), disease-causing mindfire breath and immediate drop-to-minus 1 hp- psychic crushing? What about spawning seugathi, mythic ones at that? Yes, these guys are glorious.

Speaking of mythic seugathi – at CR 7/MR 3, poisonous gas, contagious madness and telepathic command of confused creatures render the critter so much cooler – two thumbs up, once again! At the lowest end of the spectrum, CR 3/MR 1 thoqqua constantly transform the terrain, are sunder specialists and take one of the lamest base creatures, rendering it mechanically exceedingly distinct – kudos for making these cooler! The penultimate creature herein is one of my favorites (Yes, I love Age of Worms…) – the worm-that-walks. While we get a CR 17/MR 7 conjurer as a base creature, the template itself is the star (and will be used in my planned AoW-mythic campaigns) – the template provides numerical escalation, tighter ability-control – and yes – various tier-based abilities make these guys a beauty. Oh, and yes, there is a worm-zombie simple template…though I wished it was as deadly as the spawn of Kyuss…

Thereafter, ladies and gentlemen, the goth and literature scholar in me had a slight nerdgasm – at CR 21/MR 8, the new creature herein is the *drum roll* CONQUEROR WORM. Poe’s poems pwn posers. *ahem* Pardon. Not only is the artwork stunning (and not so slug-like as in 3.X’s fiend folio, the conqueror worm actually gets unique tricks this time around, not just a numerical escalation – Deathless (regenerating in an HOUR) with ranged CMBs via tongues, lethal, all-consuming slime that adds insult to injury by reviving the slain as undead and massive spellcasting prowess, these things will SO feature in my campaigns – even among the iconic new creatures in the product-line, these worms stand out.

Editing and formatting are good, I noticed no significant glitches apart from some minor formatting hiccups here and there. Layout adheres to Legendary Games’ nice two-column full color standard, streamlined and developed further – and for the better. The artworks by Michael Jaecks is neat indeed. The pdf comes fully bookmarked for your convenience.

Jason Nelson, Mike Welham, Alistair Rigg, Tom Philips – I extend my sincere congratulations to you, gentlemen . this ranks as one of my favorite installments in the series – with the exception of the relatively bland grick, these worms are downright glorious, with supplemental material and templates standing out just as much as the surprising diversity of unique abilities that set the worms apart; that give them a distinct identity beyond “worm-like, eats and kills” – these critters fight totally differently from their non-mythic versions and bring to the table the unique panache I have come to expect from mythic monsters. And worm-riding. worm companions. Come on! How awesome is that? Final verdict? Unsurprising 5 stars + seal of approval – superb job indeed!

It’s never been this awesome to have worms before – and YOU can have worms as well! Here on OBS and here on d20pfsrd.com’s shop!