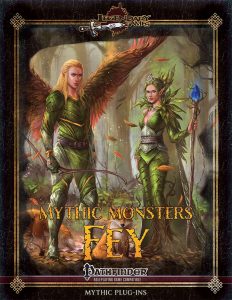 So, this time around, we get something rather radically different – we get an actual, full 10-level PrC as supplemental material, the fey-bound knight, who requires a BAB of +4, the ability to cast a 1st level arcane spell from the illusion and enchantment schools, suitable languages for the courts and 5 ranks in a skill. The knight gets d8 HD, 2 + Int skills per level, 3/4th BAB-progression and ½ Ref- and Will-save progressions and 7/10th spellcasting progression. The PrC nets proficiency with simple and martial weapons as well as light armor. At 1st, 5th and 9th level, the PrC nets “Skill Focus (enchantment or illusion” or “Greater Skill Focus (enchantment or illusion)” – that should be Spell Focus and Greater Spell Focus, respectively. The PrC gains low-light vision at first level, or upgrades the ability further. Additionally, the PrC class levels are treated as fighter levels for the purpose of feat prerequisites, 2nd level nets a +4 bonus to Bluff and on saves versus mind-affecting spells or effects, which upgrades to slippery mind at 7th level. 3rd level nets +4 to Stealth checks. The knight may also become class levels rounds invisible, as per the spell, as a swift action, with 7th level increasing duration to 1 minute per class level. At 4th level, when confirming a critical hit, the knight can force a target to fall asleep 1/day, +1/day for every 2 levels thereafter. The ability notes that the save is Charisma-based, but since this is a PrC and not a monster, we’d expect to see the save DC spelled out here.

At 5th level, the knight gets DR 2/cold iron, which upgrades to DR 4/cold iron at 8th level. 6th level nets class level minutes of fly via gossamer wings, with activation being a swift action. 7th level nets an illusory armor (once more, disbelieving DC should be spelled out); 8th level lets the knight roll twice on Bluff or Disguise checks. 9th level nets a breath of life/dimension door combo that also greater invisibility-s the knight as an illusory duplicate dies in her place. Usable 1/day. The capstone nets fey apotheosis. The prestige class comes with mythic upgrades for all abilities – darkvision and greensight, mythic spell abilities, etc.. However, there is another pretty crucial flaw here: None of the abilities properly codify their type – Ex, Su, SP? No idea in many instances. This is really puzzling, and, like the save DC-guffaw, a puzzling oversight. Don’t get me wrong – neither breaks the PrC, but they constitute unnecessary flaws in the PrC.

Okay, there are a couple of CR 1/MR 1 fey herein: The brownie gets a series of cool SPs and makes these fey really helpful for Crafting and persuading folks, using the surge die in a cool manner. Their happy whistling while working also translates to some bardic tricks, making this an epic take on the concept. Big plus! The jinkin gremlin can solo the group tinker ability and leading a group, a mythic jinkin improves save DC and CL while also increasing the severity of the curse placed on magic items. The mythic jinkin can also use its hatred to penalize a target (I assume the default standard action for SU-activation, but an activation action would have been nice…) and become permanently greater invisible to the target – for mythic power, this may extend to a second target…damn cool! The mythic grig may 3/day upgrade its SPs to the mythic versions, and the grig may maintain its fiddling, once started, quicker and use mythic power to regain rounds of fiddling. The mythic sprite can use its luminosity to dispel darkness-based effects. The verbiage has a slight deviation from standard here. The sprite also gets the ability to emit a burst of potentially blinding light. The tooth fairy is wicked: Odontophobia makes it gain frightful presence versus a victim after extracting a tooth and imposes a penalty to saves versus its tricks. Brandishing a creature’s tooth lets them restart this ability. EW. They can also penalize natural bite and claw attacks. Really cool mythic upgrade.

The pdf also contains 2 CR 3/MR 1 creatures, the first of which would be the forlarren gets more versatile SPs and may exchange heat metal uses. The forlarren may also use an immediate action to relegate the remorse felt to other characters – when it uses this ability, a mythic power use nets an AoO nauseating aura. The nuglub gremlin would be the second creature at this CR/MR loadout and gets opportunistic grappling and bleed damage claws and teeth as well Improved Sunder as well as use mythic power to ignore hardness of an item.

At CR 6/MR 2, we get a mythic version of the sprite swarm, which can duplicate a hypnotic or rainbow pattern, though the latter requires a mythic power expenditure. The swarm also gets a bleeding damage causing needle cone that also affects targets with distraction. Nice one! The mythic iteration of the fastachee clocks in at CR 13/MR 5 and may use its abilities to 1/day duplicate heroes’ feast and the summon nature’s ally spells can be cast faster, with mythic power even as a swift action, and single creatures can get the agile or savage templates added. They can also instruct targets in farming and gardening, with a bonus for 1 year. Domain spells may be freely upgraded to their mythic iterations and the fastachee criting a target can alleviate starvation, but also make the target overly full – and yes, this may be used with regular attacks via mythic powers.

At a pretty massive CR 18/MR 7, the mythic hamadryad can’t be flanked or caught flat-footed, may extend her DR and energy resistance to allies, and is excellent at social skills – oh, and more targets for charm effects. Her arrows entangle (add constriction via mythic power…ouch!) and a mere touch can wreck metal – really cool. The hamadryad is also guarded from harm by terrestrial animals, plants and vermin, as befitting of her station. Cool mythic upgrade! The Cr 8/MR 3 mythic sangoi reprints the Mythic Aid feat for your convenience, and the curse of misery ability is significantly better. They can sneak attack bleeding targets, their horrific critical ability gets better…and they receive a paralyzing gaze, making an already cool critter even more badass. Speaking of which…at CR 20/MR 8, there would be the Vilderavn. This fellow is AMAZING. They can analyze fighting styles, use mythic power to reopen bleeding wounds just closed, add murderous command to their already nasty shatter loyalties ability. Oh, and they get better defenses, a death curse, better critical (including fortification-negation…), instant assumption of those whose souls they have eaten…the statblock takes up a total of 2 pages with a ton of unique and amazing abilities that further enhance an already impressive critter. Big kudos!

The new critter herein is a winner: The Horzitoth is described thus: “A thick mound of lumpy, tattered rags hangs suspended like a cloak over a blot of darkness in the doorway. Its two spindly arms end in long, downward-facing knives, and a horse skull, with a wild green eye behind it, rests where its face should be.” Yes, this one is CREEPY. At CR 8/MR 3, these fey are addicted to nightmares and pull the nightmares of the sleeping into the waking world. It also regains hit points or gains temporary hit points in the presence of sleeping targets, and it may Wisdom drain targets and regain mythic power. While this cannot be cheesed, these fey can use mythic powers to affect the waking world with them. They can also return home via mythic power, but only while near a civilized structure or observed. Not unobserved. Observed! Nice one. Oh, and it can dimension door with grappled targets through doors… Super cool critter!

Editing and formatting are very precise regarding most components, but there are a couple of details that are not as refined as we’ve come to expect from Legendary Games, particularly regarding the PrC. Layout adheres to the 2-column full-color standard of the series, and artworks are a mixture of old and new, with the quality being high. The pdf comes fully bookmarked for your convenience.

Mike Welham, Jason Nelson and Loren Sieg all are designers that stand for excellence, and as such, it should come as no surprise that I adored most of the builds within. While the sprite somewhat underwhelmed me, the horzitoth is amazing, and so are most of the upgrades herein. HOWEVER, the PrC is significantly less impressive. It offers nothing I haven’t seen before apart from the mythic upgrade-synergy, is conceptually okay, but its rules-presentation is more in line with monsters than with PrCs. It feels a bit cumbersome and unfocused, as far as I’m concerned, and not up to the coolness of the rest of the pdf. If you don’t mind that, then consider this an excellent installment; as a reviewer, however, I need to take this into account, which is why my final verdict, alas, has to be 4 stars. However, since a couple of the builds herein, particularly the horzitoth, hamadryad, vilderavn, brownie and sangoi really captured my imagination, I will bestow my seal of approval onto this in spite of its imperfections.

You can get these inspired fey here on OBS!