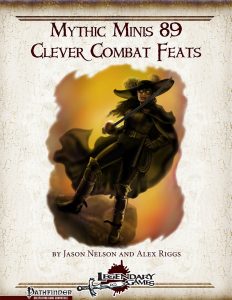 -But a Scratch: You can use the feat with ranged crits and the DC is reduced the farther the attacker is away. Shaken duration increases by +1 round per 2 mythic tier. I assume a minimum of 1, but am not sure here. However, being critically hit thereafter or subject to an ability that deals more than 1/5th of your maximum HP end the effect. 1/5th max HP is a petty inelegant benchmark cap here.

-Cat and Mouse: When not attempting a riposte with the regular feat, the dodge bonuses are doubled. When expending mythic power in conjunction with parry and riposte and successfully parry, you gain these benefits without having to forego the riposte. The feat could be slightly clearer when the mythic power expenditure takes place. I assume upon activation of parry and riposte.

-Circuitous Shot: When using the feat to bounce ranged attacks off objects, you can bounce it off up to mythic tier objects, at -2 per object. If you expend mythic power prior to firing, you can render the target flat-footed, even if the target would be immune to it. Yes, it’s the Lucky Luke trick-shot feat! Neat!

-Clambering Escape: If you use the feat to reposition a creature, that target suffers a -2 penalty to saves to avoid the respective effect. Via expenditure of mythic power before making a saving throw to which evasion applies, you may use Clambering Escape for a reposition attempt before making the save, potentially allowing you to escape it. Even if you don’t, you receive +2 to the save if the repositioned creature is in the area of effect. Interesting one!

-Cunning Intuition: Ready an action as a full-round action, but be capable of making the full-round action when the readied action is triggered. Additionally, you can choose whether to have your initiative changed after the action was performed, or whether to retain your old place in the initiative order. This feat’s mythic upgrade…is frickin’ OP, even for mythic gameplay.

-Fencing Grace: Gain the benefits with any light or one-handed weapon. When wielding a rapier, you retain the benefits even while TWFing or using flurry of blows or have your other hand occupied. You also add 1/2 mythic tier to the bonus provided. When wielding a rapier one-handed and expending a surge while attempting a disarm, reposition, steal or sunder, you may roll twice and take the better result. Odd one – on one hand, it unlocks other weapons; on the other, it retains unique benefits for rapiers. Not sure what to think of that…feels a bit all over the place to me.

-Martial Dominance: +1 creature in range intimidated per 5 BAB. When used in conjunction with a critical hit, the number of rounds is multiplied by the critical multiplier of the weapon. Is a bit overkill in my book.

-Ranged Feint: When ranged feinting, you may choose to have the creature feinted flat-footed versus any creature’s next attack, not just yours. If you do, the first attack ends the effect, whether or not it hits. Penalties for feinting non-humanoids, animal intelligence, etc. critters are halved. By expending mythic power, you can cause the target to be denied his Dex-bonus to AC versus all attacks made until the beginning of the next turn and may declare the use of mythic power even after feint-results are made known.

-Ready for Anything: Take a full round’s worth of actions during the surprise round. If a combat would have no surprise round, you may expend mythic power to get a surprise round in which only you may act, unless other creatures have the same feat or a similar ability. Considering mythic gameplay’s exceedingly high value of high initiative/hitting first, I’d not allow this in my mythic games.

Editing and formatting are very good on a formal level, though on the rules-language level some minor ambiguities have crept in. Layout adheres to Legendary Games’ two column full-color standard and it features the artwork on the cover; that’s it – the one page content is solely devoted to crunch. The pdf has no bookmarks, but needs none at this length.

Jason Nelson and Alex Riggs deliver Clever Combat feats that have some gems…but also feats that frankly are too strong, particularly in mythic gameplay. Ironically, the initiative modifying feats in question would be less problematic in non-mythic games. That being said, the pdf still has a fair price-point and some sweet ideas, making it a quintessential mixed bag, slightly on the positive side, and my review thus clock in at 3.5 stars – though I can’t round up on this one.