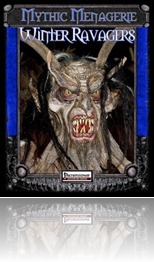 I really like tongue-in-cheek, jokey takes on material, thus I was looking forward to this pdf – after a short foreword, the CR 18 Autumn King, a jack-o-lantern-style fey-lord made for an appropriately epic introduction to this pdf – while a unique signature ability was absent from his statblock, I nevertheless enjoyed the rather complex statblock of this unusual fey lord.

Unfortunately, the rumour-mongering CR 8 Badalisc can’t keep up with this quality – repackaging a Dark Naga, who is not the most exciting critter in itself and slapping a new name on it does not make for either a compelling monster, nor is it a business-practice I condone.

The CR 5 Cobbler Elf, though, again, rocks hard: A nice take on the unintentionally annoying Heinzelmännchen-style fey, they can be both blessing and bane and should be handled with care, lest their well-meant overenthusiastic “improvements” of existing items prove to be an adventurer’s undoing.

The CR 7 Dire Flying Reindeer is a cool idea, deriving its flying from a rare combination of herbs fermented in their gullets – a good example of fluff making an otherwise boring statblock palpable.

Next up is the CR 7 Grinj, the take on the keen-hearing creature by Dr. Seuss. perhaps it’s due to me being German, but even as a child I never got the appeal of any of Dr. Seuss’ characters and considered them to be boring and/or stupid. Unfortunately the statblock does not feature a reason for me to remedy this opinion – while the keen hearing and crafting aptitude are ok, I was not wowed by this critter.

I was downright insulted by the take on The CR 4 Krampus, though: A slight modification of the Yeti, once again repackaged as a new creature and ignoring the mythology to boot, is something I was deeply disappointed by: When I was a child, I was afraid these guys accompanying St. Nicolas would drag me to hell, while this is essentially a horned yeti. Boo.

The dragging-to-hell is done by the one creature apart from the Autumn King I somewhat enjoyed, the whip father, a psychopath-come-holiday-terror who seeks to drag unfortunate fellows to the Abyss. An ok creature thanks to the enchanted signature whip.

The final creature, the Perchta, is a green hag with another name slapped onto her. LAME.

Editing and formatting are top-notch, I didn’t notice any glitches. Layout adheres to the 2-column standard and each creature gets its own artwork. The pdf has no bookmarks. I did like two of the creatures and the stat-cards, but quite frankly, feel ripped off by this purchase – doing a paste-job on monsters is not something I’d personally do and while Cobbler Elf and Autumn King were mechanically cool and provided neat ideas, all the rest of the monsters are either boring or repackaged stuff, not giving enough credit to their mythology. They also don’t feature any lore-section. Try as a I might, I can’t bring myself to recommend this pdf in any way – if you want monsters, buy some other installment of Mythic Menagerie, they are all vastly superior to this one and any purchase of this pdf serves to support uncreative repackaging of content. Steer clear. My final verdict will be 1.5 stars, rounded down to 1.