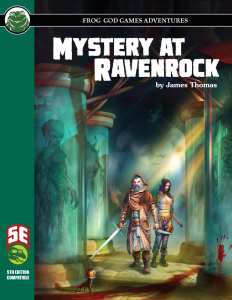 The module includes three nice, mundane/alchemical items – one type of toxin that helps deal with a specific monster defensive ability, and two means of delivering this substance. This does add a nice tactical angle here. While we’re on the subject of items – considering that 5e has less standard treasure books than e.g. PFRPG, I very much applaud the inclusion of a variety of magic items here. As a nice bonus, the full-color maps (with grids and scale noted) are included as player-friendly, key-less versions as well – and yes, they’re full color. As a minor nitpick, two of the maps use a 10 ft.-grid, when a 5-ft.-grid would have been more useful for 5e, but that is me nitpicking.

Now, as far as system mastery is concerned, Edwin Nagy did a surprisingly good job – the PFRPG-version excelled via its mechanics and the very well-DESIGNED components of its challenge; the 5e-version does not shirk from this challenge, and presents a surprising amount of different critters (which make up the bulk of the additional pages of this version), and the statblocks I checked do check out! That’s usually one thing that multi-system adventures fail horribly at, so kudos for providing proper stats AND getting the formatting for 5e right! The book also uses proper rules-language and default stats for guards etc. where applicable. Moreover, the version manages to retain the sense of being very tightly-wound and controlled, being well-designed as a hard, but fair adventure. That’s how it’s supposed to be. Big kudos for the conversion here. On the nitpicky side, I did notice some very minor formal hiccups here: A Languages line that reads “[stuff]”, a “Wand, uncommon” that’s not in italics, etc. – but the rules language-relevant materials? Precise and pristine. My only complaint here would be that the module has no inherent mechanic or rationale to prevent or dissuade from long-rest-scumming.

That being said, the dungeon that is here? It is not a place that will have your players grumble for playing it – it is genuinely interesting. Aforementioned Raven’s Arse, as it turns out, has become the home of filth fairies, and the first part of the dungeon, where we explore the sewage system, is genuinely icky and hilarious. In 5e, we have a wide array of supplemental creatures. This part of the dungeon also ties in with the region’s history and the legend of the dragon slain – one combat encounter features the immortal ire of the dragon, and the fairies have used bones and the like to generate some funny vistas.

Obviously, the main meat of the module will thus be covered by the party exploring the dungeon of the keep and the keep itself; the well-designed component of the module is reflected here in traps, in well-chosen DCs and proper application of 5e-mechanics. It should also be noted that, from holding ells springing open to the labs themselves, the module does a good job blending themes and providing variety within a given adventure. Obviously, the PCs will have to defeat Master Minder (who’ll most likely have prepared a devastating ambush with his troll bi-liver enhanced super-soldiers), rescue the Baron and depose of the imposter-simulacrum to bring peace back to the region – but easier said than done…the wizard does have a pretty devastating tactical array, and the fact that the players might not want to kill everybody doesn’t make things easier either. That’s a good thing.

Editing and formatting are excellent on a rules language level, and evry good on a formal level, with only cosmetic nitpicks. Layout adheres to Frog God Games’ two-column full-color standard, including the usual amount of lots of text per page; locked door DCs are noted in the room headers, if applicable, which is a great way to handle that. The pdf does feature a couple of really nice full-color artworks, and I certainly appreciate the full-color maps, particularly the inclusion of a full set of player-friendly maps. Kudos! The IndieGoGo-version offered token in b/w and color – cool! I am not sure if those components are included in the retail iteration.

James Thomas’ second foray to Ravenreach is a module I actually enjoyed more than the first one in many ways; he seems to have found his own distinct voice, and the execution of the challenges herein is great. Edwin Nagy’s conversion to 5e manages to retain the strengths of the adventure, and is simply well-executed. The main complaint against the PFRPG-version, though, remains: I couldn’t help but feel slightly disappointed by it. Because it is SO CLOSE to being a phenomenal adventure that embraces nonlinearity, and then elects to go the safe route in a pretty predetermined and linear dungeon-crawl. With but a single page, this could have been elevated to the ranks of modules that deserve to be called an example of excellence; as provided, the adventure is certainly good; whether you consider it to be very good, though, is mostly contingent on what you want from a module. If you want a great little dungeon-crawl that is challenging, at times funny and at times scary, then this delivers in spades, particularly if you like old-school style gaming and are fed up with sloppy conversions to 5e. This does actually operate properly in 5e. If you want a free-form adventure that presents multiple ways to tackle its challenges and focuses on providing a dynamic environment, then this might leave you wanting more. My final verdict will clock thus in at 4.5 stars, rounded down for the purpose of this platform.

You can get this neat adventure here on FGG’s storefront!

You can get the first adventure in Ravenreach here!