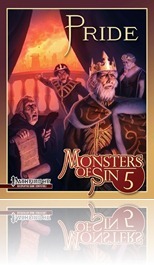 This mini-bestiary from Open Design is 10 pages long, 1 page front cover, 1 page editorial, 1 page SRD and 1 page back cover, leaving us with 6 pages of content, so let’s check this out!

Starting off with a short introduction on the concept of sin and the rules to quickly make a prideful creature, we delve into the monsters:

The pdf closes with embodiment of sin traits as well as a short narrative on pride in the Midgard campaign setting.

Editing and formatting are top-notch, I didn’t notice any glitches. Layout adheres to a nice full-colour 2-column standard and the artworks for the creatures are awesome. The pdf has no bookmarks, which is a pity – by now all but BP-length pdfs should have bookmarks.

Pride. If I’m guilty of one deadly sin much more often than any other one, it’s definitely pride. And why not? After from lust, it’s perhaps the one closest to being considered acceptable in society and is even positively connotated. Do a corpus search and you’ll e.g. get “justifiably proud” -which other deadly sin can claim ANY positive undertones apart from pride? None. That’s what makes this the most viscous of the deadly sins and if we take the Judeo-Christian mythology, it is pride (and envy) that cast down the devil from heaven. Pride is enticing. We want our parents to be proud of us. We yearn to feel pride and the lack of it can just as easily destroy a man as an overabundance of it. Pride. The “King of Sins”. How does this installment hold up?

Well, on the one hand, we get two of the best creatures in the whole line so far. On the other hand, two of the creatures fail hard: The Mirror Hag is one that punishes superficiality and vanity and is at best loosely connected to pride and the emperor kobold is just there for the sake of kobold fanboys and obviously unimaginative filler with a tired concept and no stellar mechanics to lift it out of the muck of “been there, done that”. While I personally abhor the high kobolds from SGG’s Kobold King-pdf, I consider them the vastly superior take on the concept of a high kobold. Which leaves us with the imho best 2 creatures in the line so far, but only half the content of the whole pdf. And that is not enough. With only 4 creatures per installment, I expect imaginativeness, novel ideas and cool signature abilities to justify the asking price when compared to SGG’s Mythic Menagerie-line. And this pdf, while it does deliver some stellar coolness, fails as hard as it succeeds when it fails. I guess Pride comes before the Fall, after all – my final verdict will be 2.5 stars, rounded up to 3 for the purpose of this platform. I hope the upcoming installments will be of a more consistent quality.

Monsters of Sin 5: Pride is available from: