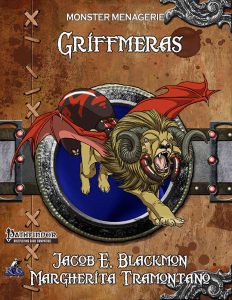 This monster menagerie happened in a curious way: Owen K.C. Stephens posted brief descriptions on social media; Jacob Blackmon started illustrating them and stating them for 5e – and then, Margherita Tramontano joined the fray and crafted Pathfinder iterations – there we go – the pdf is 28 pages, 1 page front cover, 1 page editorial, 1 page SRD, 1 page advertisement, leaving us with 24 pages of content, so let’s take a look!

The critters herein all have full-color artworks, depicted on their own page, which makes them suitable for handouts – a big plus, as far as I’m concerned. Now, as for the critters within, what do you get?

Well, we start with the Ahemset, which would be a massive viper with a crocodile head. It clocks in at CR 6, and has poison, a dominating gaze and scales that can cause serious injuries to those trying to grapple it. It also has several serious errors in its statblock.

The CR 12 Cerbearus is a puntastic good outsider with multiple heads and cool SPs. It’s also missing e.g. a plus in its Perception value, which also contradicts itself (is it +17 or +28?), and it’s missing its initiative-line.

At CR 8m the ulvarg is a Large wolf with a human head and mouth, capable of speech. Its formatting for its double strike ability is all kinds of wrong and obviously still mired in 5e Multiattack. Ability types are also incorrectly formatted. A plus is missing…you get the idea. Also at CR 8, the Criocore is a ram-headed lion with spider-aspects (cool!) and lacks a maneuverability rating for its fly speed. Unfortunately for the acid web-spinning critter, its statblock also has glitches. The CR 7 dracopotamus fares better- with its knockout, poison and ability to create vortices, it’s a pretty cool critter!

At CR 13, I love the look of the grunthumplema – basically the front-body of a bear, supported with orca tail and head as well as a walrus head – capable of swimming through ice, with freezing blood, this is a “cool” (haha) critter. (The freezing blood DC is only noted in the statblock, not in the ability description, but the critter is fully functional!)

The CR 5 Guldami is a wolf/scorpion-hybrid and conceptually pretty cool, even though I’d have loved to see more unique abilities here. Karnnoloups, at the same CR, are antlered wolves that may assume humanoid form during the winter months. It also has quite an array of cold-themed spells known. Lykopards, at the same CR, are panther/jackal hybrids with caustic blood – oh, and they are evil. Also at CR 5, we have the serpohipp, a horse body with a large cobra protruding from the neck – it’s, unsurprisingly, poisonous. Unfortunately, it once more sports a couple of glitches in its statblock.

Really cool: Picture a colossal hybrid of a sperm whale and a massive crab at CR 18, the lyngbakr is just that – it’s a pretty brutal, if very straightforward combatant. On the other end of the CR-spectrum, at CR ½, the sektaf is something I’d genuinely take as a pet: Picture a spider with a cat’s head – including many cat-eyes. The artwork is pretty cute, and the critter comes with the option to take it as an improved familiar – greatly appreciated!

Editing and formatting are okay on a formal level, passable on a rules-language level. It’s painfully obvious that this version of the supplement has been rushed out; several of the creatures have serious and pretty obvious glitches that should have been caught even in a cursory inspection. Layout adheres to the series’ two-column full-column standard, and the pdf comes with pretty cool full-color artworks. The pdf comes fully bookmarked for your convenience.

Jacob Blackmon and Margherita Tramontano usually do better work – a couple of the creatures herein are inspired in their concepts, and there are some gems in this pdf; at the same time, there are plenty of glaring and obvious glitches in the rules integrity department, making this pdf ultimately feel rushed. All in all, my final verdict can’t exceed 2.5 stars, rounded down.

You can get this rushed conversion here on OBS.