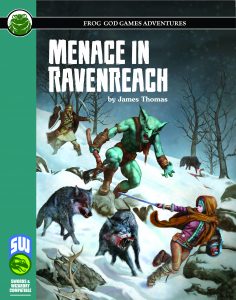 Yep, I know – that’s the S&W-cover. I couldn’t find a picture of the PF-version’s cover. (It’s the same, safe for the system-indicating logo)

The Pathfinder version of Menace in Ravenreach clocks in at 27 pages, 1 page front cover, 1 page editorial, 1 page ToC, 1 page SRD, 1 page back cover, leaving us with 23 pages of content, so let’s take a look!

Okay, so first things first – while this module is part of a two-part mini-series (the second part of which is “Mystery in Ravenrock”, named after the fortification), this very much works smoothly as a stand-alone scenario. Nominally intended for characters level 4th to 7th, I’d advise in favor of sticking to the lower level range if your player characters tend to gravitate to the higher power-levels.

As far as the setting is concerned, this  module is situated in a borderlands-style frontier in both physical location and themes; aesthetically, this is very much a Lost Lands module that hearkens closer to the tradition of Greyhawk; it feels gritty and pretty down to earth, which is a plus in this instance. As a touch I greatly appreciated, for example, the module does suggest trade good equivalencies if you want to emphasize the remote location; this remains optional, but it is a touch that imho rather enhanced the atmosphere of the environment.

Ravenreach is a small town carved from the wilderness, courtesy of the stalwart and firm Baron of Raven’s Reach Bartholomew Blackraven, and a proper settlement statblock has been provided. A minor downside of the module would pertain the cartography featured – while the module does contain a properly, grid-using map of the initial scene, of the Ravenrock border fortress and of one encounter site, all of which come btw. as full-color maps and don’t have annoying numbers or the like and thus work in the context of VTTs and as handouts sans breaking immersion, there are no maps of the general region or the starting border village provided. While e.g. Raging Swan Press’ offerings provide a plethora of options there, it is something that a few people might consider to be a detriment.

On the plus-side regarding the aesthetic formal components, from public notices asking for adventurers to price lists and the like, the book offers not one, but 4 (!!) handout lists that you can just give your players, which most assuredly is something to be applauded!

Speaking of which, the supplement also is rather detailed regarding its rumors on various matters, differentiating between different topics to inquire about; kudos for that. There is one more thing you definitely need to know about regarding this adventure, and that would be its rather unique focus: This is not a location-driven module per se, and doesn’t focus on a given environment or singular storyline. Instead, the module can be considered to be a means of establishing ravenreach as an environment with its own peculiarities. The module establishes a series of encounters that run the gamut from the quick combat to the mini-dungeon, which, as a whole, cover more than one season. This is, in a way, a module concerned with the long narrative, and this is definitely something I appreciate. It also enhances the usefulness of the material within beyond the confines of the module. It is rather easy to dissolve the module into its constituent encounters and e.g. intersperse them into your own adventure. Considering the existence of Pathfinder’s Ultimate Campaign-hardcover, that’s pretty much the immediate association I had – this may be a great way to set up the PCs as rulers to come. So yeah, it is prudent to bear in mind that this may be considered to be a long narrative, or that it may just as well be dissolved into a more episodic context.

The module does feature a pretty significant amount of read-aloud text for many encounters, and the book does feature one new magic item and a couple of unique statblocks. Regarding those: The book is smart in that is doesn’t waste wordcount on stock characters, instead making smart use of PFRPG’s wealth of critters and NPCs. Speaking of whom: The NPCs and monster-builds herein do tend to do some interesting things, and briefly summarize more obscure rules-components, allowing you to run them more smoothly – certainly something I appreciate. On the downside, I did notice a few minor snafus among the statblocks, such as HP not checking out for the Constitution values provided. The pdf provides stats for the Baron and his Wizard in the back. The minor snafus don’t hamper the integrity of the narrative or the like, and the module still remains challenging, but it’s something to bear in mind.

All right, only GMs around? Great! So, if the “call to adventure” style handout doesn’t do the trick, the module offers a bar brawl in the fully mapped “Dancing Bear” tavern against the 4 Gretis brother as a means to get the PCs on track for the adventure; those that slay one or more of the brothers may find themselves under arrest and press-ganged into the service of the local lord, which, while an old trope, is also pretty classic, and can be executed rather well. Smarter PCs that avoid casualties may find themselves in a position where they will have a better basis for negotiation.

Either way, the PCs are taken by Captain Jeremy Thorn to the keep, to see Master Minder, the wizard responsible for e.g. the manacles. The wizard is neither friendly, nor that well-versed in social graces, and tasks the PCs to find a troll. Oh, and return the beast alive. Okay, but how? Well, he hands the PCs magical manacles to coerce the troll to tag along. And yes, the manacles are properly statted.

The trek to secure a troll will lead the PCs into the wyvern mountains, with several landmarks noted, and the suggestion of 0-2 wilderness encounters per landmark lightening up the journey, until the PCs find a particularly nasty, multiclass’d troll to shackle. Once they have the fearsome brute in shackles, the PCs will be ambushed by spriggans under the command of the daughter of an elven enchantress killed by Blackraven; whether or not she survives is accounted for. Returning to Ravenreach, soothsayers will predict an early onset of a harsh winter, so the PCs might well earn their keep as mercenaries while settling in for winter, and indeed, the second part here deals with encounters during these darkened months. Speaking of which – the module provides handy tables for condition modifiers depending on weather, Stealth, etc.

The PCs will be pitted against particularly nasty trolls with class levels responsible for a wayside massacre, escort a wagon train through the biting snow (and either cross an icy lake or a dangerous, rocky ridge – with individual challenges) to Camp Rough’N Ready – where fans of Witcher 3 may find a nice easter egg where the PCs may inadvertently find themselves fighting (for glory and wagers) a fist-fight with a black bear.

Editing and formatting are good on a formal and rules-language level – I noticed a few minor glitches in statblocks and some formal ones (like skill-references not capitalized), but as a whole, the module gets is right more often than not. Layout adheres to a nice two-column standard that, for the most part, adheres to classic Frog God Games-aesthetics, with blue highlights thrown in. The artwork and cartography are both full-color and rather nice. As mentioned before, the presence of player-friendly maps constitutes a big plus for me. The pdf-version comes fully bookmarked for your convenience. I can’t comment on the virtues or lack thereof of the print-version, since I do not own it.

Somewhere between a series of encounters, a module and a regional setting book with mini-adventures, this module provides a fun and well-wrought old-school yarn that captures the elusive spirit of grittier old-school gaming rather well. Indeed, if anything, that is the module’s central appeal, at least to me – the tone. It feels down to earth, yet sufficiently fantastic, and the sense of pure age and tragedy suffusing the small components are what elevate this adventure for me personally. On a mechanical level, it’d have been nice to see a few tougher tidbits, but that should not deter you – if you’re looking for an adventure that gets the gritty tone done right (and part II will deliver some serious payoff; no, not spoiling its nature here!), go check this out. All in all, a neat adventure, well worth a final verdict of 4.5 stars, though I do have to round down.

You can get this adventure here on Frog God Games’ store!

Enjoying my reviews? Please consider leaving a tip here on my patreon!