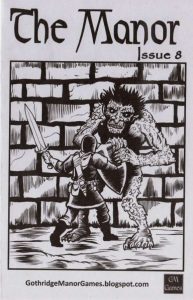 The 8th installment of the Manor-zine clocks in at 26 pages, 1 page front cover, 1 page editorial/ToC, 1 page back cover, leaving us with 23 pages of content. The pages are laid out as 6’’ by 9’’, which means you can fit up to 4 pages on a sheet of paper when printing this.

All right, so this installment of the Manor takes a distinctly different focus – this time around, we focus on crunchy components. The first article, penned by Douglas Cole and Peter V. Dell’Orto, deals with old-school grappling presenting two alternative systems to handle the rather infamous issue. We first take a look at the shortcomings of the grapple options available for S&W, with clear design goals stated. I really like this, as it not only makes my reviewer’s job easier (haha!), but also because it makes it apparent for the GM what to expect, and why. Now, as a graft-on system, the book thankfully codifies in a simple way how to add it to your preferred OSR-system. In short, grappling uses AC, HD and damage, three common things that can be found throughout OSR-systems. A grapple is handled as an attack, using 1d20 + the Strength-based to hit modifier; multiple attacks and fighting defensively are taken into account, and if you employ an attack bonus instead, that bonus is added instead. Cleave-like systems are also noted, if that type of old-school is how you roll.

Now, in the spirit of OSR-simplicity, you simply roll damage if you hit – but instead of damaging the foe, you get CP – control points. These are recovered IMMEDIATELY once the target is let go, with humans etc. dealing 1d6 + Str-mod control points damage. Up to half the defender’s HP, up to the defender’s HP and more than the defender’s CURRENT HP are the thresholds for effects. To hit penalty for grappled targets begins at -4, -8 and then prevents attacks altogether. Similarly, damage and AC as well as movement is reduced by being subjected to a grapple. The system presented is clean and concise and can be resolved very quickly in actual play. CP can be converted into damage, btw.

Now, this base system is smooth and elegant, and optional rules can be added to modify it – armor and grappling, for example; Control points that convert to dice…and even cooler, we get something for folks like yours truly that enjoy finer grained options, with a higher resolution distinction of 5 quality levels as an alternative. Certain thresholds may allow for takedowns or stunning throws, which are yet more fun additions. This system provides perfect mechanical symmetry, but the pdf does not stop there.

There is a second system that provides an alternative to the “I win” or “I suck” duality of the base system, with a condition-based second approach, which differentiates between grappled, restrained, pinned, incapacitated and prone conditions of inconvenience. This also represents a well-crafted alternative.

This article is gold. It warrants the asking price on its own, and is easily the best piece of crunch that the whole Manor-run so far featured.

The second article would be a guest article penned by Trey Causey, for his amazing Strange Stars space opera setting released by Hydra Cooperative, providing a playable humanoid clade Ibglibdishpan. The clade needs at least 14 Intelligence, Charisma and Strength may no exceed 10. They get +1 to skill checks based on Intelligence and 1/session, the race may ask the GM a question, gaining a useful fact based on available data. However, this focus on Intelligence comes with a risk. When the clade has to make an Intelligence based skill check and roles a natural 11 or 13, or makes use of the aforementioned hypercognition ability, the character must make a save vs. mental effects. On a failure, you get a selection of 6 nasty effects that range from catatonia to seizures, Stendhal Syndrome, etc. Solid, if somewhat brief write-up.

The next article, penned by Tim Shorts, provides quick rules to determine number of hirelings available by settlement size, costs for 5 occupations and a d20 table with 14 entries that provides a couple of unique, brief benefits and skills/knacks the hireling may have. 6 sample hirelings, with stats, are provided as well. Helpful little article. Master Shorts also penned the last article, which is devoted to the humble torchbearer! And I like a lot here! We get, for example, 8 different special torches, which include waxes torches that float, reinforced ones, flare torches that burn brighter…I love this per se…but in an odd twist, none of the torch-modifications come with a suggested price or weight-increase, unnecessarily limiting the appeal here. There also are 5 suggested skills/Special abilities for torchbearers, which are great ideas: Battle torchbearers can hit a target, imposing -4 to hit for one round. Scavengers can scrounge together an improvised torch. However, precision-wise, the article does leave a bit to be desired. “Scavenged torches don’t last as long and are not as bright.” Why don’t we get precise notes here? It’s not like e.g. the flare torch in the same article doesn’t provide the like. The article is cool, but it feels like it could have used a bit more meat/internal consistency regarding the level of detail it provides.

Editing and formatting can be considered to be good on a formal and rules-language level. Layout adheres to a no-frills one-column standard and the pdf sports nice, comic-y b/w-artwork (with the exception of the artwork for the new clade, which is really detailed and nice). The pdf comes fully bookmarked for your convenience.

Now, up until this installment, I was never impressed by any piece of crunch in the Manor-zine. I liked a lot of the flavor and mini-modules, but rules-wise, not so much. While this pdf, partially, also falls short of its potential for excellence, it does represent the best installment regarding crunch. The grappling rules in particular are worth the low asking-price on its own. My final verdict clocks in at 4.5 stars, rounded down for the purpose of this platform.

You can get this nice ‘zine here on OBS!

Missed Strange Stars? You can find that system neutral setting here, and the OSR-rules for Strange Stars here!