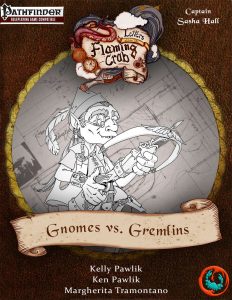 This installment of the delightfully oddball „Letters from the Flaming Crab“-series clocks in at 21 pages, 1 page front cover, 1 page editorial, 2 pages of SRD, leaving us with 17 pages of content, so let’s take a look!

Now, as always, we begin with the charming frame narrative, wherein mister J Gray finds a letter from the planes- and world-hopping UCS Flaming Crab, providing a nice and flavorful introduction to the two races contained within this pdf, the first of which would be the gyrenomes. They are not affected by wanderlust and instead focused on insatiable curiosity, with a propensity for knowledge and tech. Sounds familiar? Yeah, they are somewhat like a slightly less insane version of Krynn’s tinker gnomes.

Stat-wise, they get +2 Dex and Int, -2 Wis (*grin*), are Small and packrats: If they spend 10 minutes organizing their backpacks etc., they are treated as Medium for the purposes of carrying capacity. They can also jury-rig items, offsetting the penalties of the broken condition as a move action, for up to 1 round per character level. Cool! They get a +2 racial bonus to Disable Device and Knowledge (engineering) and gain Technologist as a bonus feat. When crafting any of the tech-based items (as via Craft Cybernetics, etc.), they can do so in half the time and at half cost HOWEVER, if they choose to do so and roll a 1 on a crafting check or failing it by 5 or more, they need to roll on the malfunctions table. These become only apparent upon using the item. To not go the quick and risky route requires a Will-save, btw. The malfunctions table, in case you were wondering, is massive: From blowing up to generating cheap dye or doubled charge use, the effects are mechanically relevant, have extremely tight mechanical effects (damage types, bonuses, etc.) and the table is 3 full pages long! LOVE it! Gyrenomes also have acid and fire resistance 5 and proficiency with hand and repeating crossbows. They treat one-handed firearms and tech-based ones as martial weapons.

The race comes with a total o 4 different alternate racial traits – fey roots replaces the tech savviness with classic gnome SPs and a+ bonus to saves versus charms and compulsions; the packrat tricks can be replaced with +2 to saves vs. diseases and poisons. Smog breather replaces the resistances and allows them to temporarily ignore the effects of smoke/cloud-based effects (COOL!) and Zero Gravity Savant replaces the skill bonuses with +2 to Fly and better maneuverability. The substitutions are balanced, meaningful, elegant and fun. Kudos. We also get favored class options for alchemist, bard, gunslinger, occultist, rogue, summoner, swashbuckler and wizard. I have no complaints there.

The race sports the nanotechnician alchemist replaces mutagen with boost, an edible oil that takes 1 hour to produce and a full-round action to consume/activate. A nanotechnician can only benefit from one boost and only one may be maintained – no stockpiling. These can net scaling fast healing, mental or physical attribute boosts, SR, an electricity-based touch attack or a speed-enhancer. Boosts last for class level minutes and render the nanotechnician sickened after the duration has elapsed. Cool tweak. Swift and instant alchemy are replaced with full-round and standard action extract mixing and the capstone nets a potent, untyped damage bomb of nanites. Cool archetype! The second racial archetype is the racketeer swashbuckler, who gains a modified proficiency-list that includes one-handed firearms and one-handed technological weapons, which is also reflected in the panache-modification to regain points. The archetype also gets 7 unique deeds that replace standard deeds, allowing for gliding flight, sped up flight, barrel roll attacks, 45° or 90° turns, hovering, etc. – full blown aerial mobility here. The deeds are glorious and allow you to start with Batman type glides and then upgrade that. Instead of swashbuckler finesse and weapon training, these folks begin with a battered boost glider that later works as a jetpack. 7th level and every 4 levels thereafter improve maneuverability, replacing nimble. Seriously cool archetype!

The race comes with a Ki Field feat that lets you expend ki for shield bonuses to AC. We get two mundane items – action vests can be studded with small items, which may then be quickly procured. Insta-rations are what you’d expect. Nice ones! Now, beyond the aforementioned boost glider, we also get omnitool gauntlets that work as a universal, charge-powered toolset for Craft and Disable Device checks. Neat! The tractor beam baton can move matter, with charges required depending on weight. We also get a new psychic/sorc/wiz/summoner spell at 1st level, overclocked weapon, which increases the damage output of big weapons, but also makes them prone to misfires. The write-up of this cool races concludes with a brief gazetteer of gnomehome, a sample village. And yes, the write-up does mention the appropriate age, height and weight tables to use.

Okay, so far, we have pure awesomeness – let’s see if the mogwai gremlin race can compete with that level of quality! Mentality-wise, they are conservative protectors of the natural order and as such, at odds with the gyrenomes. Rules-wise, they get +2 Dex and Int, -2 Str and are treated as fey. They are Tiny and fast for their size, gaining 30 ft. speed. Mogwai have low-light vision and treat Disable Device and Survival as class skills. Mogwai get a +1 racial bonus to atk versus androids and constructs, aptly named Rage Against the Machine. They can 1/day cast prestidigitation as a SP and Mogwai with a Wisdom of 13 or higher gain sabotage touch, usable 1/day versus non-intelligent technological items. On a success, the item suffers a malfunction, making great use of the inspired table, from the inverse end. They also get a +1 racial bonus to saves versus technological items and creatures. Instead of the prestidigitation SP, they can choose a 1 point, properly codified bite attack. This and low-light vision may be exchanged for darkvision and may replace RatM with +4 to trip. Bonus types are super-tight and the race gets its own age, height and weight table. Favored class option-wise, alchemist, barbarian, rogue and shaman are covered.

As far as class options are concerned, we get the primal nature oracle mystery, which nets access to Disable Device, Intimidate, Knowledge (nature) and Survival. Bonus spell-wise, we begin with break and move on to nature’s exile, magic circle against technology, primal regression and at higher levels, atavism, mass and return to nature. Nice spell-selection. The revelations include an untyped damage touch versus objects and constructs with limited daily uses. We also can grow natural weapons temporarily, which later upgrade to include enhancement bonuses. Two of these also may be maintained congruously at 11th level. Calling nature’s allies, commune with nature, replacing Dex-mod with Cha-mod for AC and Reflex-saves, Favored Enemy Spellcasting (constructs) as a bonus feat, which later adds Robot’s Bane and Technophobe, a variant, vampiric discharge… nice tricks here. The capstone nets the primordial template and immunity to all spells that don’t affect animals or plants as well as 1/day shapechange. All in all, a really nice mystery with a strong theme.

The second class option provided would be the blowslinger gunslinger archetype, who is, bingo, a blowgun specialist. Pellets may be imbued with poison, alchemy, etc. as a standard action and act as a conductor for the substances. Action economy of this improves at 7th and 15th level. This replaces gunsmith and menacing/startling shot. Grit applies to blowguns and we get 6 specialized blowgun-based deeds, with utility dart sporting two distinct uses that lets the blowslinger jam mechanisms and constructs or scoot objects. Keeping poison in the mouth sans ill effects, blowgun melee, sniping, negating AoOs when firing in melee and increasing save DCs of pellets – nice array. Gun training is replaced with blowgun training. The race gets a new item that is called “Ball of wasps” – guess what it does? Yes, I like it. Feat-wise, we get two racial feats: Spit Darts lets you hide darts in your mouth and speak two-word sentences while holding them there. Combine that with poison in the mouth. Neato. Toxic Bomb lets you add inhaled or contact poison to bombs. The racial spell provided is a clearly codified detect technological creatures and we conclude this racial write-up with a 1-page depiction of a gremlin warren as a fluffy backdrop.

Editing and formatting are top-notch on both a formal and rules-language level – even the small intricacies have been accounted for. Kudos indeed! Layout adheres to the nice two-column full-color standard of the series, with artworks being a blend of original b/w and fitting public domain art. The pdf comes fully bookmarked for your convenience.

Kelly and Ken Pawlik and Margherita Tramontano deliver in spades in this humble racial supplement. This pdf provides two balanced, cool and flavorful races that employ the amazing malfunction table in the middle for a truly intriguing offering. I had no gripes regarding any of the options herein and indeed found myself excited about some of the class options and racial abilities, something which is not a given at this point. In short, this is an amazing little pdf, well worth getting. My final verdict will clock in at 5 stars + seal of approval.

You can get these cool, flavorful, balanced races here on OBS!