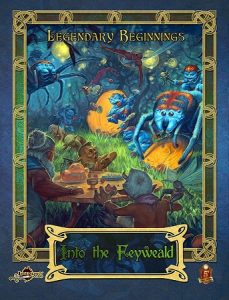 Before we do, I should not be remiss to mention that this module features a handy “slightly advanced” spellcasting array of options used by some of the creatures herein -the module does sport some discrepancies regarding some spells that are due to the conversion from PFRPG’s beginner’s box: Bane, for example, is utilized in a version that does not require concentration. While I get why this decision was made, it is something 5e-purists may sneer at as an non-required complication – why not simply grant the creature in question a unique ability? This, however, remains the exception; for the most part, the rules, conforming to the simplified standards, work.

It should also be noted that this module is intended to be kid-friendly; as such, it features relatively straightforward themes of fighting bad guys and doing good; if political intrigue or shades of grey morality are what you’re looking for, this may not be the place. I firmly believe in teaching via roleplaying games and kids should not just slog through combat upon combat – and the author seems to concur here, stating the directive that social and thinking skills should be challenged by modules as well.

As for the age-range, well, unless the kids in question are particularly sensitive, this module should be appropriate for kids ages 4 up; in case of very sensitive kids, 6+ would be a pretty safe bet. This does not mean that this module is “kid’s stuff”, mind you – it very much works for adults, but I’ll get back to that in the conclusion.

All right still here? A strange sickness has been plaguing the Feyweald and the nymph queen Pryhoza has asked for assistance from Threll’s king Ambrose I, offering an alliance in return for assistance in this matter, which would in turn render diplomatic relations with reclusive druids a distinct possibility. The problem seems to be gift horse…and hence, enter the PCs, which are assumed to be members or associates of the Zekerian order, as denoted by magical amulets – these amulets also provide a safety net 1/day to prevent death and allow for some healing to further decrease the potential of player frustration. The 5e-conversion of the item is solid.

The group arrives at Northrunner Sound, scheduled to meet with the queen and her two advisors ( a leprechaun and a brownie), but an audience with the queen obviously requires the proper gifts – while the king has sent a whole chest, the hustle and bustle of sprites means that the PCs will have to rely on their wits and people skills to present the correct gift to the correct fey -this may be achieved via respective skill-checks.

This first social stumbling block out of the way, the feast begins, but as soon as the arboreal banquet is in full swing (and PCs get bored with the interactions), the party is, alas, crashed: Mites riding giant jumping spiders assault the party and it will be up to the PCs to defeat the threat. Here would be as good a chance as any to notice an aesthetic deviation from 5e-formatting standards in the statblocks: We have colons instead of full stops and e.g. Melee Weapon Attack and Hit are not properly italicized. Similarly, spells are not italicized properly in the respective statblocks. It should be noted, though, that these hiccups are aesthetic in nature and do not compromise the integrity of the creatures faced.

After the threat is eliminated, queen Pryozha confides in the PCs: An evil force has taken root in the feyweald, changing it, turning it and its creatures slowly evil, turning it Unseelie. For 5e-purposes, this quasi-template, a collection of abilities you can slap on fey creatures, has been included for your perusal. She asks them to seek out the threat and take care of it, but not before granting them a specific oil that is supposed to help them bypass the resistances of some fey – a valuable resource that the PCs hopefully use cleverly – and one whose effects have been modified to work better in conjunction with 5e’s more rock-paper-scissors-style design paradigm.

On their way through the forests, the PCs will have a chance to help awakened badgers from a trap laid by unseelie brownies and fauns navigate where traps and mites await and encounter an aggressive bird that can be calmed down by smart players…and finally defeat a nasty unseelie giant toad…and finally, possibly the first underground complex ever awaits the players: The lost grove, where a sinkhole guarded by mites now speaks of the influence of a nasty, trapped being called Bayaga. In the pit of the grove where the PCs will have to defeat more mites, an unseelie sprite and faun and yaldira, in Pathfidner a forlarren, she, as the champion of the evil force Bayaga, has received a unique, conversion. The villains boast in good ole’ traditional villain monologue and indeed, during the combat, bayaga creates a crystalline earth elemental as a form to fight the PCs – destroying it takes the unseelie curse from the afflicted fey. It should be noted that the crystalline boss does conform in rules-tricks to what earth elementals can do in 5e, which is a pretty nice touch!

Editing and formatting are good, I noticed no grievous glitches, but there are some minor deviations from 5e-formatting conventions in the statblocks. Layout adheres to Legendary Games’ neat two-column full-color standard for the series, though in an odd peculiarity, my readers depict some passages of text in slightly bolder letters than other paragraphs. This is purely aesthetic nitpickery, though. The original full-color artwork by Paul Pederson and Beatrice Pelagatti employed in the book is absolutely gorgeous and makes for cool handouts. Michael Tumey’s cartography is similarly nice.

Paris Crenshaw’s first kid-friendly module is fun, evocative and has a structure and feeling like a classic fairy tale, which it ultimately is. This renders it not only palpable for kids, it also can be fun for adults and with some rewrites, you can make it as dark as you want to. Structure and diversity-wise, this is pretty cool. That being said, at the same time, the traveling section through the forest and the final dungeon note paths the PCs travel, with letters and numbers pointing…nowhere. You see, the cartography is player-friendly, which is awesome – no distracting keys and hotspots can be found on them…well, on all of them but one, which is weirdly inconsistent. But the structure of the module seems to employ a bit of wilderness hexcrawling, some sort of choice regarding the path taken…and the maps provided do not help in that regard at all, which is weird to me; my theory is that the module was supposed to have player-friendly and GM-maps and they have been either mixed up or somewhat confused. Anyways, this is still a minor hiccup that does not detract too much from the quality of the module.

There would be one more slight complaint of mine, resulting probably from being somewhat spoiled by Playground Adventures: I am a firm believer in teaching children, at least to a certain extent, about morality in games, since it is an easy and unobtrusive manner to do so. Reinforcing good behavior and morals can be easily achieved in games. Personally, I would have loved to see the module actually feature the choice of how the PCs handle defeated unseelie entities more – a bit of interrogation and foreshadowing from prisoners, for example. The module does offer a means of reverting the unseelie transformation, which is a good thing in a kid-related context. This may be controversial, but I do believe that there is a didactic opportunity lost here – if the choice to keep the defeated unseelie alive or kill them was emphasized more, that well could upset some kids, true; at the same time, rewarding players for “doing the right thing” and only knocking the fey unconscious in the aftermath could have been a very educational experience for the players. I once did this in my games and as soon as the kids realized that good deeds would be rewarded, the motivation to be good increased significantly. Considering 5e’s choice regarding killing or just subduing foes, this feels even more like a missed opportunity. Your mileage may vary, of course, but it is something to consider when running this module, particularly for the younger ones.

The 5e-conversion of the rules from the original PFRPG-iteration was handled with care, though the 5e-version, to me, seems to actually be a bit more difficult…which is a good thing. Why? Because my players curbstomped everything to smithereens in the PFRPG-versions. Who said kids can’t make killer-builds? 5e’s less mechanics-centric focus does make the module feel a bit more rewarding.

Ah, right, the final verdict. All in all, Into the Feyweald is an evocative fairy tale to participate in; difficulty-curve wise, it is VERY easy, until the final encounter, where things get tougher. The module assumes a moderately competent GM and features a LOT of read aloud text, so no excessive experience is required on the GM’s side – only enough to handle the key/map hiccup sans stumbling and the final encounter; if you can run that one, you’re good…and it’s not hard to run. The module is beautiful and fun, though it does not reach the absolute apex; its atmosphere is great and playful, but a couple of the finer aspects could have used a bit more guidance or specific rewards for actions. The balancing of the module generally worked better for me than in the PFRPG-version, but the slight deviations pertaining the statblock-formatting somewhat cancel that out. In the end, I consider this a good module for kids and a nice conversion with some slight room for improvement. My final verdict will hence clock in at 4 stars.