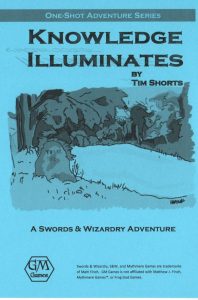 The freshman offering by Tim Shorts clocks in at 28 pages, 1 page front cover, 1 page editorial/ToC, 1 page advertisement, 1 page back cover, leaving us with 24 pages, laid out in 6’’ by 9’’, which means you can fit up to 24 pages on a given sheet of paper when printing this out – provided your eyes are good enough, that is.

The pdf includes a few pieces of supplemental content: The plant blood drop can add a d8 to healing potions, but sports, oddly, no market value. Also sans market value: The new item arrow of fireball, which inflicts 1d6 damage in a 10 ft.-radius upon impact. The new spell, ward of living death, is a 5th level cleric spell that allows you to set a permanent trap (or until it’s triggered): If a creature violates the ward, it is transformed into a ghoul over a day. NO SAVE. Any living creature can be affected, which makes for a ton of questions – what about slimes, for example? Do the ghouls gain sentience? What if e.g. a dragon passes through? The spell also fails to specify which kind of “assistance” can be sued to reverse the transformation. Basically, a plot device, not a spell. Rules are not precise here. The module also introduces a new undead servitor creature, the Tvorn, who can teleport up to 40 ft. and still attack – and they get an ominous “back attack bonus” when porting behind an opponent. Pretty sure that should refer to the thief’s backstab ability and as such, should specify the level of power of the backstab.

The pdf sports, in a nice help for the referee, a 3-page table that lists XP-rewards.

All night, only referees around? Great! So, the module requires a series of assumptions to work as written, all of which are ultimately cumbersome and detract from the appeal of the module. The first of these is that the module assumes the existence of a Harper-like global organization of good folks that stood vigilant against extraplanar intrusions. The so-called Porters of Gideon, now deemed outlaws and exiled, every known member executed. Introducing a recently vanquished global organization for the sake of background story – not the best move here. Secondly, the adventure assumes the existence of Viz, a form of condensed that allows for the casting of spells sans components or a spell slot, completely delimiting spellcasting. Yeah, not getting near my game.

The module has basically two sections: Section one is a fully mapped mini-hexcrawl with 7 locales of interest and focuses on finding a reclusive wizard’s workshop – the man is called Tergul. (Or Tergal – the names herein are pretty inconsistent.) The locations of interest in the hexcrawl include a giant skeleton, a pond that nets 3d6 (!!) pebbles of Viz and a few bandits. The dungeon that is the workshop is interesting in that Tergul was a recluse, but not evil – hence, we have an 11-room mini-dungeon that sports an annoying, warning magic mouth, and the remnants of the tragedy: You see, Tergul found a box, which serves as a gateway to a pocket-dimension of a potent demon; he opened the box and the usual bad stuff ensued. While Porters attempted to close it, they failed and were killed by the demon, who retreated back home. He locked the box once more, grieved for his slain acolytes, cursed his goddess and hid away from the demon’s minions. It is in the aftermath of these happenings that the PCs stumble into a complex, which, while not bad, falls seriously short of being remarkable in any way. The complex, compared to Tim Shorts’ later works, is bland, sports standard monsters and obstacles…and frankly, I can’t really come up with a good reason to run this. It’s not exactly bad per se, but it is painfully unremarkable.

Editing and formatting are not good – neither in the formal, nor in the rules-language category. Layout adheres to a printer-friendly 1-column b/w-standard and the pdf sports a couple of decent b/w-artworks. Cartography is b/w and solid, but does not come with key-less, player-friendly versions – particularly jarring for the hexcrawl map. The pdf has no bookmarks, which constitutes a comfort-detriment.

Tim Shorts has improved significantly over the years. Knowledge Illuminates, unfortunately, is a very weak adventure, hampered by bad formatting, by requiring more lore adjustments from the referee than required and by, on a rules level, subverting a pretty basic tenet of how magic works. All in all, that would be a sensible thing to ask for, if this book actually warranted the work. For that, alas, it is too unremarkable. On the plus-side, the author offers this for a PWYW-download, but frankly, I’d strongly suggest getting any of his other works, including the free mini-manors – you’ll get infinitely more fun out of them. In spite of this being a freshman offering and PWYW, I can’t go higher than 2 stars on this one.

You can get this adventure here on OBS for PWYW.