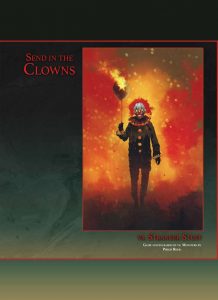 This supplement for Vs. Stranger Stuff clocks in at 54 pages, 1 page front cover, 1 page editorial, 1 page ToC, 2 pages of advertisements, 1 page of back cover, 1 page SRD, leaving us with 47 pages of content, so let’s take a look, shall we?

Okay, so, if you’ve been following my tackling of the VsM-Engine-based supplements released by Fat Goblin Games, you’ll notice that I really love the Vs. Stranger Stuff Season 2-book; I think it is a really elegant, detailed game that is fun to play and fits its niche perfectly. Now, this supplement is, in a way, a stroll down memory lane – it represents, in essence, a kind of V.1.5 of the base system, with more supplemental material etc. That means, this actually has everything you need to run the game.

As I’ve explained the peculiarities of VsM-based games 4 times by now, I assume you’re familiar with them, in particular Vs. Stranger Stuff Season 2. Now, this review, and let me state that from the get—go, will be based on the utility of this book in conjunction with Season 2’s cool rulebook. This may not be 100% fair to the book, but it is the question that customers want answered, and so I’m going to provide that. As a Season 1 supplement, this is retroactively designated as EASY mode for the context of Season 2 gameplay, and this is my testing baseline.

So, we begin with an intro, one that lists appropriate inspirations for horror-themed clowns; the next three pages are devoted to a basic character-generation-section for the Kids (i.e. the PCs) – this obviously does not reach, by a long shot, the details we get in the Season 2-book, but it suffices to make characters and includes even a few good/bad gimmicks, which are here still called “Stuff.” (As an aside: Whoever deiced to rename them did a good job!) Two more pages explain the basics of fighting and there we go – at this point, only a total of 6 pages has been devoted to information that has become obsolete due to Season 2’s release.

Now, how does the GM-section fare? Well, we begin with an overview of locations that may matter to the PCs and we get notes on dying and hazards as well as a suggested Hard Mode and a bit of guidance regarding advancement and rewards – now, if you think that the GM-section is made redundant by the release of Season 2 as well, then you’d actually be wrong – there is value that holds up rather well to be found here: For one, we get 11 suggested plot lines that you can develop – all of which, obviously, are clown-themed to some extent.

Now, in a really cool section that I absolutely adored, we get a brief list of clown lingo: Do you know what a Charivari is? What “Galop” means in context? Well, you will after reading this supplement. I love it when RPG-supplements convey knowledge like this. After this, we dive into some detailed discussions of clown types and also a couple of clown antics that you can use to flesh out your clowns. Now, the book goes beyond that – we also get a nice, hand-drawn map of a standard neighborhood house and a full-color map of the town of Crestview Hills. Beyond that, we get a color-book-style map of a sample town, which you can color or have your players color – particularly when playing with kids, this can be pretty amazing. There is a full-color puppet-pal on one page that the GM can print out, cut up and assemble…and we get a page of 4 human faces with disturbing smiles – just paint clown faces on them… So yeah, the supplemental material is extensive and goes above and beyond of what one usually expects to see – kudos.

The lion’s share of the book, though, would be devoted to three adventures, the first of which would be Ben Dowell’s “Creepy Clowns.” Now, in order to discuss these, I need to go into SPOILER-territory. Potential players should jump ahead to the conclusion.

All right, only GMs around? Great! So, fall is approaching and, in a time-honored tradition., older kids, bullies and pricks have decided that it’s fun to do the horror clown and frighten the young ones – so that’s the backdrop. The module then proceeds to do something structurally interesting: Taking a cue from RPG-classics like the original Ravenloft module, the adventure has a randomization effect: The module has the players draw cards in the beginning – the suits then determine the structure of certain aspects of the game, hooks, etc.. We begin with an encounter with a clown-painted bully, and after that, the Kids will, after school, notice absurdly large footprints – following them, they may well witness a clown goon, recruiting one of these bullies, transforming them! Beyond the combat, there may well be an epidemic if the kids don’t stop it! And indeed, the local carnival may well be the source, with no less than 4 radically different scenarios, including 3 different boss stats, waiting for them! Really cool little adventure. Huge plus for the replay value! This makes for an excellent convention game that doesn’t become boring for the GM after running it twice. The module also comes with a nice good gimmick as a reward.

The second adventure would be “The Case of Cap’n Freezie” – which comes with a really spooky photograph of an ice-cream truck that managed to send a shiver down my spine. Since the summer’s start, several kids have gone missing, and the legend of the spooky truck have begun circulating. As is often the case in such genre-fiction, the police is, oddly, twiddling its thumbs…so the kids need to investigate the case! This one is directly tied into the Crestview Hill backdrop, but can be easily adapted to pretty much any other town. The tale is actually rather tragic – Joey Prescott’s family owns the junkyard and is known for its “get rich”-schemes, one of which was the eponymous Cap’n Freezie-ice-cream truck. Joey, as a teen, was forced to dress up as a clown and drive around, hawking ice from the truck. Alas, children are cruel, and so he was jumped, beaten p, and locked into the truck. The adolescent culprits figured he’d be found in time. He wasn’t. Half-dead and disfigured by severe hypothermia, Joey was committed first to a hospital, then to an asylum. It took 20 long years, but he has snapped out of catatonia- and he’s out for revenge. After all, his erstwhile tormentors now have kids of their own… And indeed, the kids will notice the van prowling the streets…and, if they’re brave, they may well piece together the evidence and put a stop to the Capt’n before too many kids perish in the refrigerated hell the madman is creating… Nice: Depending on the actions of the kids, different types of good gimmicks may be earned.

The third adventure herein would be “Silhouette of a Clown” by Ismael Alvarez, takes place in Slim River, and pertains a legend of a scary clown that manifests at 3 AM. Slim River is very close to Crestview Hills, but does require some time getting there – and if you can use the scary railroad bridge, you’ll be there quicker…It’s a little thing, really, but it’s something I found I could relate to, and I suspect I’m not alone there. Slim River is also a tiny village – and as such, the finger-pointing has already begun. Having experienced the “fun” of rural hypocrisy for much of my childhood, that would be once more something I considered to be interesting. The clown is creepy, with black, empty eye-sockets – it’s known as Kuzo, manifests, speaks and then lunges, but the Kids always manage to evade it sans waking their parents. The sightings also seem to cluster once a decade. In case you haven’t noticed – this one is, theme-wise, closest to IT. There is a difference, though: You see, Kuzo was actually an immigrant, ostracized from the close-knit community – and he drowned in the river. Now, a curse of death looms over twins, promising death for one if the river is not appeased…and as one of them is rushed to the hospital, the other is possessed by Kuzo! How do the PCs deal with the possessed clown? Well, that is the question – he may well drown if lured to the river; if gotten into the church, he similarly will fall…but the module can end, either way, on a rather somber note, one that can see the PCs get both good and bad gimmicks, and which may make the surviving twin rather creepy. Or, you know, you could put a spin on the theme, as the pdf suggests: Perhaps Kuzo was actually trying to protect the town from dark river spirits, which is an interesting twist that could be used to make the module’s replay value higher for the GM.

The pdf also contains some sample NPC stats, clown special attacks and a list of all collated creepy clown statblocks.

Editing and formatting are very good, I noticed no serious hiccups on a formal or rules-language level. Layout adheres to an 8.5’’ by 8.5’’ two-column full-color standard and the pdf sports some nice full-color artworks. The pdf comes fully bookmarked for your convenience. The cartography is full-color and nice.

I was positively surprised by this book by Ben Dowell, Ismael Alvarez, Rick Hershey and Lucus Palosaari. For one, the modules don’t become redundant – while the modules all sport the clown-theme, the y are vastly different in theme and topic covered. From the mundane slasher-flick to the 80s-grotesque/weird to the ghost story, the modules cover a nice variety of tropes and all of them feature a neat angle. Now, the rules-aspect, obviously, is not as relevant as it once was, but once you take the massive bonus content into account, you’ll realize that this holds up surprisingly well. The adventures may not reinvent the wheel, but they all are interesting in some form, and the book shows that the authors really cared here. I am particularly partial to the replay value of the first adventure, the visuals of module #2 and the alternate, tragic identity of the BBEG in module #3 – so yeah, each of the adventures has something strong going for them. Hence, my final verdict will clock in at 4.5 stars, rounded up for the purpose of this platform.

You can get the excellent Season 2 of Vs. Stranger Stuff here on OBS!