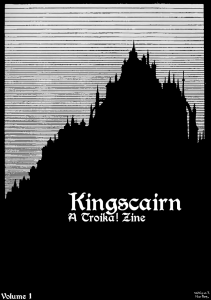 This small ‘zine clocks in at 27 pages of content, already sans ToC, editorial, front cover, etc.; the ‘zine is laid out in the customary booklet-size (roughly 6’’ by 9’’/A5), and it should be noted that is has some serious white space and wiiiideee margins.

Then again, that’s probably somewhat intentional, as much of the ‘zine’s aesthetic is base don the use of the really inspiring (and imho underappreciated) artworks of William Thomas Horton – each of the 6 backgrounds, for example, gets their own associated artwork, and in-between, vistas using the clear, but never starkly-rendered contrasts of the style help to provide a unique identity. My review is based on both the by now unfortunately out of print physical version of the ‘zine and the pdf.

So, what is this? In short, it is a first glimpse at a setting for Troika that is somewhat more grounded and more conductive to a prolonged campaign than the average crazy trip through the Humpbacked Sky. The tone of this setting could be described as hauntological in its references of old types of science-fiction/fantasy, closer to the Vernesian, or to Gormenghast. Indeed, it is probably Gormenghast that was my very first association upon reading this.

Kingscairn is an island-bound city-state, ruled, big surprise, by a King, and is best known for mining the Urth-mineral Kingsium (to mention the sort of somewhat Dickensian humor herein); the introductory paragraph does have this weird glitch in the prose that makes it look as though the lake is on top of the city, thankfully the only such weird hiccup in the booklet: “Kingsium, that is found in the depths of the lake that sits on the top of the island.”

Anyhow, from the introductory setup, we move to a name table with names (mixing Scandinavian and Anglo-Saxon ones), surnames, professions (that exist in real-life) and mien. All of these are one-word things. However, we also get two d6-tables: One for guilds and gangs, and one for holidays and events. Here, the respective entries are elaborated upon: We learn about the Bridgebrickers Union,. The Gentlethieves Guild, and the revolutionary Cesium Brotherhood; as far as festivals are concerned, the important Fig Harvest Festival and the Flying Fish Fair are noted.

The pdf then proceeds to offer a die-drop field of color-coded hexes, courtesy of Daniel Sell, to determine weather before we move to the 6 new backgrounds. These have in common that they are well-balanced and carry this very special blend of the classic and retro-weird: The Brother of the Guild of Gentlethieves has pledged to practice the chivalrous act of stealing from the rich and giving to the poor, hearkening back to a day of gold-hearted scoundrels with dashing swagger. Disgraced Matriarchs start off with 3 spells and may test their luck to convert individual to their cause. Beyond the early industrial sprawl, the important figs are growing on steep cliffs – and it is the Fig Poachers, those daring individuals, that risk life and limb to supplement their opulent lifestyle.

The structure of Kingscairn mirrors social status – the farther away from the bottom and water, the more prestigious, and as such, the Guardians of the Wayward Path stand vigil over the few paths that lead from the city’s apex to the lake, while the Starweaver prefers the few unspoiled regions of the isle, gazing into the stars through their dreams. They can test their luck for hints and begin play with 5 spells and 3 Astrology, but not much else beyond that. Finally, there would be the Octomancer, a failed soothsayer who has mounted an occult octopus (!!) on their head – which translates to getting the stealth-enhancing Ink Shroud spell, among other things. As a whole, I really liked these backgrounds, and the sense of somewhat nostalgic mono-no-aware they seem to exude, at least for me. (And yes, each background is faced by a gorgeous and fitting artwork.)

The final section of the ‘zine contains three regions: The Bridge of Bountiful Bazaars, the Low City, and the Piers. Each area comes with a brief paragraph or two on it as a whole, and a d6 table of encounters. The bridge has a supplemental d4-table for the spice-merchant, with all 4 entries having meaningful effects – which is great! (I know that Troika! tends to eschew the details, but I’d have appreciated some prices for those.) The low city has no additional tables beyond the encounters, while the piers come with 4 visions of the dream whale and 4 general fishermen rumors. Minor thing, but it irritated me: The tops and bottoms of tables in the book lack the black line to denote their closure.

Editing and formatting are good on a formal level, very good on a rules-language level. Layout adheres to a per se minimalist one-column b/-standard that works well on the background pages, less so on the others, where the amount of white space bothered me aesthetically somewhat. The physical zine is stapled and has covers with a solid sturdiness. The pdf comes with full bookmarks, nested for your convenience – navigation is comfortable.

This is, to my knowledge, the freshman offering of Kevin Gorff (at least for Troika!), and frankly, I like it a lot. The combination of the artwork with the relatively down-to-earth setting (as far as Troika! is concerned) manages to elicit a blending of a sense of subdued humor and nostalgia that is hard to describe. The atmosphere is, most assuredly, rather unique. On the downside, the ‘zine is very much what I’d consider to be “sparse” – sparse in detail on Kingscairn, sparse in detail of how it actually operates as a society, and somewhat sparse on content for the page-count. That being said, the very low and fair asking price ($3.00 for the pdf, and the physical ‘zine was offered at a fair 5 pounds on Melsonia.com) do offset this somewhat, as does the fact that this was the author’s first offering. As a whole, I consider this worth considering if you’re a fan of subdued humor and fantasy in the Victorian tradition, this most assuredly is worth getting. My final verdict will be 3.5 stars, rounded up – now when do we get a more in-depth look at this intriguing, if as of yet very sketch-like setting?

You can get this ‘zine as a pdf here on OBS!

If it becomes available in print once more, you’ll probably find it here.

If you enjoy my reviews, please consider leaving a donation via paypal, or joining my patreon here. Thank you.