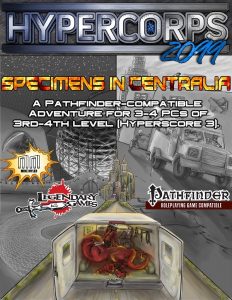 All right, this is a module intended for use with the cyberpunk/superhero-rules in Hypercorps 2099 and as such, it is designed for characters level 3 -4, with a corresponding hyperscore of 3. The basics of hyperscore and hero point-interaction are provided on a 1-page GM-cheat-sheet, though I’d still strongly suggest playing this only with the main book in your hands.

The pdf does come with a total of 4 pregens (all of which gain small full-color artworks) that sport their respective paths and are appropriately powerful. The pregens feature brief story-angles and are generally on par with one another regarding their power-levels, which is nice to see. The pdf sports two maps – a road and a cave complex, both of which come with a second, key-less version that I generally applaud. If you’re using battlemaps, though, it should be noted that the pdf’s maps sport no grid, just a note which distance equals 5 feet. Personally, I’m good with that, but I figured I should mention it.

We begin in medias res, with the PCs already having accepted a job by Forsyte Technologies to track down an escaped specimen that has taken up refuge in the abandoned coal mines of Centralia, deep in Giganot territory – and we thus waste no time, as the friendly driver Bill has to slow down the vehicle to navigate an array of debris…and obviously, it is in such an instance that the biker gang makes its move, attacking the van. The PCs better should make sure that none of the gangers escape – and from their bodies, the PCs can find a nice piece of chrome, namely hydraulic springheels. Even if the van’s been damaged, thankfully the module’s not over, for Bill knows a veterinarian turned bodytech-surgeon in the vicinity, which may see the PCs actually already receive the benefits of the cybertech in the module.

The erstwhile coal mine of Centralia, the next stop, would make for a labyrinthine place to navigate, sporting several fire-themed critters to deal with via random encounter. The thing is, the escaped hyper-firedrake has actually young now, which complicates securing and capturing the deadly creature. In order to pin down the deadly predator, the PCs can use the trusses throughout the mine to collapse sections and trap the being. The more of the drakes the PCs can secure alive, the better…but they take up a lot of room and they still have to be returned.

Yes, this once again means passing through giganot territory and yes, driving with unconcealed drakes around will draw attention…so in order to get properly paid, the PCs will have to be stealthy, otherwise Ms. Grey won’t be too pleased. In case the PCs are dumb enough to take up arms against her, stats are provided. The pdf also features stats for Bill as well as the vehicles featured.

Editing and formatting are very good on both a formal and rules-language-level. Layout adheres to the two-column full-color standard and the pdf sports some nice artworks. The pregens etc. are presented in a 1-column standard instead. Cartography is decent and the pdf comes fully bookmarked for your convenience.

Mike Myler’s Specimens in Centralia entertained me and my group when we ran it, even if it, in essence, is a very simplistic set-up. There is not much to be found regarding going off the beaten track and the module, as a whole, is linear and basically consists, if your players are good, of two major encounters. The second of these, the coal mine, is prolonged and can be tension-filled and really interesting. At the same time, this very much feels like a convention-demo-scenario. That does not mean it’s bad, mind you – it just means that it is a pretty straight railroad and one we finished in 3 hours. Granted, we’re fast and most groups will take longer, but yeah – this is a pretty brief exploration to Centralia that doesn’t really take time to develop the cool area of Centralia. The module feels a bit too railroady for my tastes – with a little hexploration or means of tracking down the target, actually catching the adversary would have been significantly more gratifying. If the PCs didn’t botch encounter #1, the module also can feel a bit like it peters out – again, fitting the time-constraints often found in convention games.

How to rate this, then? Well, as a non-convention-module, I’d consider this too railroady and brief to really excel, though the second prolonged “encounter” is pretty cool. As a stand-alone, I’d consider this about 2.5 stars. For convention gaming, though, it does work pretty well and should be considered to be a 3.5-star-book instead. In the end, I will settle on a final verdict in the middle, at 3 stars.

You can get this brief action-romp here on OBS!

While I consider the PFRPG-version of the base Hypercorps 2099 system better and thus based my review of this book on it, you can get the 5e-version of this module here on OBS!