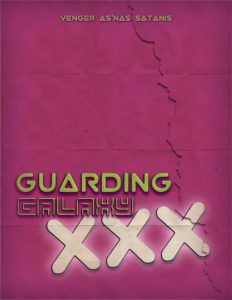 This module is intended for use with Kort’thalis Publishing’s Alpha Blue RPG, which centers on capturing the aesthetics of 70s and 80s scifi-porn-parodies. As such, the usual disclaimer regarding adult topics applies. If you’re not familiar with the system and its tropes and themes, I have reviewed the 3 core supplements for it and assume familiarity with the respective rules in this review. These reviews would also be a nice place to ascertain whether or not you’ll be comfortable with the explicit content.

All right, that disclaimer out of the way, let’s dive right in – this means that, from here on out, the SPOILERS reign. Potential players should jump to the conclusion.

After that, the PCs go into decontamination. Which sports a 1 in 6 chance to die due to a fleshmelting allergic reaction. No save. Yeah, that’s just frustrating and needlessly dickish. It’s not even funny. In the locker room after decontamination, the PCs, if they’re crafty, can witness peep-hole style voyeurism and then, it’s time to suit up. Just as the PCs are being briefed, they witness a man succumbing to a grape soda, which turns him into a tentacle monster, the first combat here.

After this encounter, the PCs meet three hipster space wizards who propose a slave-trade and try to recruit the PCs to deliver the doomsday device for them instead. Then, it’s time to man a space craft – and suddenly, the PCs get a communiqué from the Targons. After that, we’ll have ship-to-ship combat (not the strongest suite of Alpha Blue) and, no matter how it goes, the PCs will end up on P’oon’s orbit. On the planet, the PCs will meet the gangster J’aemz Khaan, who take the PCs to his bunker – turns out, there are gigantic desert worms attracted by rhythmic beats. The man is also allied with a nasty dark zedi named Obsidian Shadow. The doomsday device is close and if the PCs don’t interfere, the villains will get it – once they’re both dead, it’ll be up to the PCs to figure out what to do next. Much like Slippery When Wet, the module ends rather abruptly.

Editing and formatting are very good, I noticed no severe issues. Layout adheres to a nice two-column standard with colored veins in the background. The pdf sports nice b/w-artworks – nothing to complain in the aesthetics department. The pdf comes fully bookmarked for your convenience – kudos for going the extra mile there!

Venger As’Nas Satanis delivers a fun little module – sure, it has nothing to do with “Guardians of the Galaxy”, but that holds true for more than one scifi-porn-parody, so no complaints in that regard. Now, I totally understand that I am, ultimately, a huge ass here – this is a FREE module, so what are you waiting for? If you like Alpha Blue, you can certainly use this pdf! On a neutral, structural analysis side, I think that the end of the module is rather sudden. The middle finger that is the decontamination also isn’t exactly my idea of fun, but yeah. Structurally, this isn’t the best module – it is, however, a proper and fully-detailed, short module, which makes it superior to all the adventure-sketches usually found in the Alpha Blue supplements – you can just open this pdf and play, which makes it great for convention-style gaming. It’s not perfect, but it’s hard to argue with FREE. Considering that, I arrive at a final verdict of 4 stars – a good offering for fans of Alpha Blue.

You can get this module for FREE here on OBS!

For posterity’s sake: Here’s the old cover that got this banned for a while: 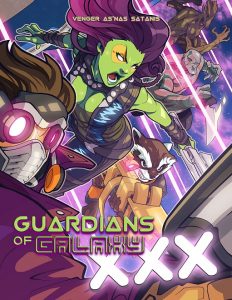