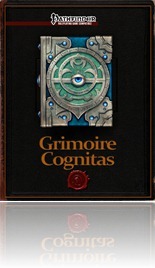 This installment of the Grimoire-series from Dreadfox Games is 32 pages long, 1 page front cover, 1 page editorial, 1 page SRD, leaving us with 29 pages of content, so let’s check out Dreadfox Games’ take of Divination-spells!

After 7 pages of spell-lists by class, we immediately dive into the new spells, so what exactly do we get? Well, one of the first spells we get, Cartograph, is rather cool in concept: Not only does it allow you to immediately escape a maze-spell, it also creates a detailed map of your surroundings, allowing for a good reason for the DM to hand out maps. However, I do have one gripe with the spell: While it specifies that it does not show non-stationary terrain or doors, the limits of the spell are hard to judge: A manmade complex with doors for example wouldn’t show doors, but potentially secret rooms. Or would it? There also are spells herein that allow the caster to attack a foe with a touch attack, temporarily emulating the senses of the being touched. Collective currents makes for an interesting divination spell that can be very helpful regarding investigations and plots: Coming in 3 variant effects, the spell can either determine the most knowledgeable subject in sight, in a large radius or on your plane regarding a specific topic. Among the detect spells, detect word makes for a truly interesting spell since it allows you to determine a word and hear the word as well as the subsequent 20 words uttered by someone in the radius. Now, this might seem broken and destined to ruin any mystery – but it doesn’t. If the word is uttered in too rapid a succession, the echoes might stun you or send you into unconsciousness, requiring careful deliberation on behalf of players to properly use the spell.

Among the more common spells, we also get some that allow targets a bonus to linguistics and knowledge-checks – ok, I guess, but not particularly exciting. Foretell Destiny is a problematic spell in my book, determining the aura of an unborn, predicting whether an unborn will become good or evil. The whole nurture vs. nature-discussion immediately springs to mind and while the spell is supposed to be hard to interpret, the problem here is that the spell lacks a comprehensive list of aura-color, relegating this spell down to essentially a DM-fiat. Good design is something different. On the other hand, hypothetical vision is cool, essentially allowing you “Sherlock Holmes”-vision, i.e. a mental simulation of a creature’s reaction to something you do/say etc. It’s also rather cool to see that the spell can be used in conversation since its verbal component is rather subtle. Read Intentions does something very similar, but on a much higher level and more generally and needs a competing skill-check to work – slightly repetitive. On the unpleasant side, the Insightful Sacrament-spell is for example a spell that enchants a liquid and allows those that partake in it to see auras as per both detect evil and detect good. Both base-spells are lame and a combination of both is no better, even with the liquid-fluff. Now there also are some spells herein that should be considered interesting like the witch spell “Map of Fetishes” which allows you to attune objects and a map. The creature to last touch the object can be tracked on the map – cool. For each such cool spell, though, we also get ones that are rather bland like momentary discovery/favoured ranger, which temporarily grant access to the respective class abilities.

Rules-wise, there also are multiple spells that hit a minor pet-peeve of mine: Multiple d20-rolls. Navigate Realities (and its greater version) allow you to roll 3d20 (or 5d20s) respectively and substitute checks you make subsequently with the predetermined results. Per se ok for 6th and 9th level, but the spell allows you to influence ANY d20-roll within 30 feet of you thus. Even with the drawback of staggering you, the spells feel rather powerful to me, but, as mentioned, that’s a pet-peeve of mine and something I felt the need to address, but not something that will adversely influence my final verdict. I mentioned the Sherlock Holmes-style prescience and there’s also a combat-centric spell doing something like this: Perceptive Deflection allows you to add your perception skill modifier to AC for one attack. Speaking of senses: Summoners and eidolons may now also merge their senses, granting supernatural senses depending on combined perception modifiers. Perfect Recall and its mass version work somehow like the recalling ability of the modify memory spell, making the powers feel like lesser versions of said spell.

There also are weird Planar Sweep-spells for aberrations, animals and outsiders, which allow the caster to look for a respective being and subsequently summon it via the respective monster spells. The spells require a minimum skill rank to work respectively. What’s weird, though, is that their text always refers to “Planar Vision” instead of “Planar Sweep”. There is also a spell granting a druid the option to add half your wis-modifier to your physical attributes when wildshaping. There are also 3 interconnected spells that I really consider interesting mechanics-wise. Prophetic Trace allows the caster to create a glyph that can then be used with the prophetic call-spell to make a prophetic encounter (a 3rd spell), which essentially is an incorporeal outline of the subject that can communicate with the callers. Nice!

Also rather cool (to find keys, for example), is Scavenger’s Dweomer, which alerts you to the presence of a specified object. And then there’s a spell I’d consider utterly, completely broken: Spellsight allows you to discern ALL limited use spells and spell-like abilities with a DC lower than your Spellcraft-check. Worse, the subject can only impose a -10 penalty and exclude 3 on a failed save and there’s not even a spell-resistance. This spell sucks. It makes concealed and disguised people obvious, while giving the players a massive advantage and since there are evil spells, the spell may also wreck a LOT of plots. Never gonna happen in my game, especially not at the paltry spell level of 3. There’s also yet another teleport tracing spell – lame. On the cool side, Transcendent Luck is rather interesting: It negates a hit or critical hit, but when attacked by the same foe within 3 rounds, the next hit is an automatic critical hit. There also are two variant true seeing spells, which land on my “lame”-list, while waking dreams rocks hard: The spell allows you to invade a target’s perception while sleeping, though the creature may pass your perception on to other willing creatures. Druids may now also use winds to communicate at 60 mph and even draw wind maps in the sand – again, neat!

Editing and formatting are good, though not perfect – I noticed some minor glitches and here and there, some clarification regarding how spells work are in order. Layout adheres to Dreadfox Games’ 2-column thorn-lined standard and comes sans artworks. The pdf does have extensive bookmarks, though. Divinations are my favourite spells. Divinations are my most hated spells. Why? Because adventure-writers often have a bad grasp of what can be done with divinations and fail to address their impact on mysteries and investigations. When used properly, they can greatly enhance awesome plots and prevent dead-ends. But e.g. detect spells tend to be annoying, especially when not properly limited. That being said, divination may not be flash
y, but in my opinion can be absolutely mind-bogglingly cool.

Unfortunately, though, this installment of the Grimoire-series falls slightly short of this potential: There are quite a bunch of boring filler-spells herein as well as spells that need clarification, have been done before. Generally, when compared to other instalments of the Grimoire-series, the rules herein are just not that innovative, instead mostly relying on types of spells that, while cool, fail to evoke the sense of wonder evoked by Mutamateria or Illusionatus. Dreadfox Games’ spells are best when they are pushing the boundaries of how spells work and what to do with them and this pdf simply failed to truly surprise me with any of its component spells. The ideas are not bad, in fact, there are some great spells here, but overall, the grimoire feels slightly uninspired and filled with more filler-spells, variants of existing ones etc. The pdf is also not exactly cheap for the amount of content provided. In the end, this pdf feels like one of the weakest installments of the series so far: Yes, it has something to offer for you, but I can’t really pronounce an all-out recommendation for this pdf. My final verdict will thus be 3 stars.

Grimoire Cognitas is available from: