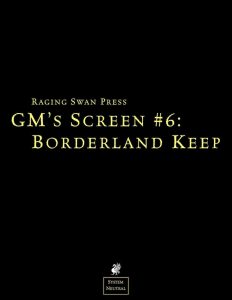 This GM-screen-insert clocks in at 6 pages, though only one page of these is actually content.

Now, it should be noted that this insert, structurally, sports dressing that you can spontaneously use, partially compiled from previous Raging Swan Press dressing books.

One column notes 10 entries for dressing, including sparring dummies and smoke rising from a chimney of the fort. Minor complaint here: Dressing outside and inside should probably be separate. The second 10 entries are devoted to sights and sounds, which does have a bit of an overlap with the previous table: A single boot jutting from the mud due to rain (table 1), compared to a raven squatting on the battlements (table 2) – I fail to see a distinct differentiation here. Making one table focus on inside, one on outside, would have probably been smarter. The final column features 10 whispers and rumors, telling us about the strange behavior of the priest, rumored bandit activity and the bedbug infestation of the tavern, these are okay, but nothing too exciting.

Finally, at the bottom of the page is a cool little list spanning the whole width of the insert: This would be “Words have Power”, and it provides neat, descriptive synonyms and miscellaneous information, providing some on the fly variety for your descriptions, with bolded words highlighted to differentiate the general concepts from the examples/synonyms. These include human female and male sample names, alternate names for battlements, castles and wilderness, as well as for soldiers. A few castle descriptors are also noted.

Editing and formatting are top-notch, I noticed no significant typos. Layout adheres to a 3-column landscape b/w-standard and the pdf comes fully bookmarked, in spite of its brevity. The insert also comes in two versions – one intended for screen use and one optimized to be printed out.

I wanted to like this GM-screen insert more than I did – Creighton Broadhurst usually does better and the information has more thematic overlap than the previous screen-inserts. My final verdict will clock in at 3 stars – easily the weakest of the first 6 screen-inserts.

You can get this insert here on OBS!