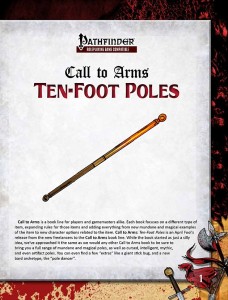 This pdf clocks in at 24 pages, 1 page front cover, 1 page editorial, 1 page SRD, 1 page advertisement, leaving us with 20 pages of content, so let’s take a look!

So, in case you’re not 100% sure – yes, this is an April’s Fools product. And yes, I’m reviewing it in August. Sad, but better late than never, right? So this begins with a basic, humorous introduction of poles – both in the game worlds and in real life. Let me go on a slight tangent here: If you do not know 10-foot-poles, they are perhaps the source of more anecdotes and prevented PC-death in old-school gaming than any other item. They also are the punch-line of more dirty jokes than rods of lordly might – and in case you’re new school and never got see their awesomeness in action, take a look at 2 pages of long (and surprisingly viable!) suggestions on how to use these poles and potentially prevent your character’s death – you’ll never want to leave your home without your trusty pole.

I’m sorry. I’ll put a buck in the groaner joke jar. So, during the years, 10-foot poles, their usefulness undisputed and tried and tested by more adventurers in varying degrees of success, have obviously spawned an array of variants, many of which can be found herein – from butterfly nets with which you can capture those annoying pixies to balancing poles, there are quite a few nice variants to be found – of course, including the 11-foot pole for the customer who goes one step beyond. This also includes folding poles and the combat ladder – an exotic weapon with the brace, blocking, disarm, grapple, monk, performance, reach and trip qualities. Overpowered? Perhaps. But -6 to atk and CMB when using it sober are at least some nice drawbacks. I just wished the basic drunkeness rules of PFRPG were better. If you actually plan on using this weapon, I’d strongly suggest using it with Raging Swan Press’ rules for barroom brawls and tie it to the hammered condition featured in that book. Technology Guide-based hydraulic poles, vermin attracting giant toothpicks, stilts – the mundane objects herein, while not always perfectly balanced, generally fall within the purview of being rather well-crafted indeed.

Of course, some poles are magical, they grow when… Ouch. Yes, I’ll stop. Sorry. Must be the summer heat BBQing my brain. *puts another dime in the groaner jar* Here, we can find bandolier containing toothpicks that can extend to proper poles; Decoy poles with hats etc. on top that act as protection from arrows. Poles with continuous flames on top; those that behave like a compass needle pr one that can be transformed in a cat with a limited movement radius. No, this pun was not one of my creation! What about a robe containing multiple useful poles? Hej, my clothes…OUCH. Yes, I’ll stop.

One step beyond these, there also are cursed poles – petulant ones that refuse to properly modify; magnetic ones…or what about the pole-ka, which is best combined with playing Weird Al instrumentals irl? Yes, the poles here are genuinely funny. What about an intelligent limbo pole that acts as a one-way portal through walls…if you can limbo under it, becoming progressively harder? There even are mythic poles herein, and I’m not talking about…Ouch. *puts another one in the jar*

What about the Staff of Sun Wukong (aka Son Goku?) Yes, cool. The giant stick bug, which may also act as a familiar, makes for a nice additional creature, before we dive into the new bard archetype, the pole dancer. Pole dancers replace bardic knowledge with a battle dance – with the effects only affecting the pole dancer and initiation actions required scaling. They also are masters of fighting with ten-foot poles, gaining dex to atk and damage with them and allowing them to treat the weapons as other types regarding damage. The overall slight decrease in power is offset by an increased capacity to use alluring abilities and the ability to substitute Perform (Dance) for Acrobatics, making them save that skill-investment. At higher levels, battle dancing pole dancers are treated as hasted and in an interesting way, they may quicken spells by expending move actions while casting spells. Powerful defensive dances that heal damage and moving while making attacks and the capstone nets an attack versus all foes in range during any point of a move. The pole dancer is an interesting archetype I very much like concept-wise. At the same time, it suffers from some issues – it is not clear whether battle dance is gained in addition to bardic performance or replaces it – I assume the latter, since the former would be pretty OP. Conversely, I assume the battle dances have a round-cap akin to performance, but the ability doesn’t specify it, which is a pity. Some of the other abilities also sport minor ambiguities that can be problematic, the most glaring component here would be the absence of weapon statistics for the 10-foot pole. I assume an improvised large weapon, but I’m not sure. On a nitpicky side, the archetype also switches genders mid-sentence, which I consider supremely annoying.

Editing and formatting are good, though not perfect – some entries sport font-changes and there are some minor hiccups in the rules-language here and there. Layout adheres to a beautiful full-color two-column standard with nice, stock artwork. The pdf has no bookmarks, which constitutes a detriment regarding the convenient use of this pdf in my book.

Quite a team has worked on this one: Ismael Alvarez, Jeff Gomez, J. Gray, Garrett Guillotte, Kiel Howell, Taylor Hubler, Lucus Palosaari, Matt Roth, Jessie Staffler, Jeffrey Swank – surprisingly, now, this does not translate to a feeling of disparate voices.

I did not expect much from this book and was positively surprised – yes, this is a joke offering; and yes, not all content herein may be perfect. But this book actually manages to be something only a few roleplaying books achieve – genuinely funny. Beyond this rare achievement, portal limbo poles are a stroke of genius and quite a few other ideas herein a delightful, playful and, best of all – feel magical. Whimsical even. While, alas, due to aforementioned glitches and minor hiccups, I can’t rate this among the highest echelons of my rating system, this still very much is a good, and more importantly, fun offering and thus well worth a final verdict of 4 stars – oh, and you can get it as a “Pay what you want”-book, so no reason not to check this out!

You can get this fun book for any price you’re willing to pay here on OBS!
Endzeitgeist out.