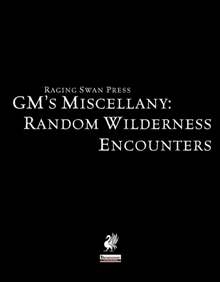 This massive compilation clocks in at no less than 141 pages, 1 page front cover, 1 page of advertisement, 1 page editorial,1 page ToC, 1 page advice on how to read statblocks, 1 page SRD, 1 page back cover, leaving us with no less than 134 (!!!!) pages of content, so let’s take a look!

Now, first of all, I have to commend the fact that this massive compilation actually sports short author bios for all contributing authors – generating awareness and reputations for authors is pretty important in my book. Beyond the ToC listing ELs and XP-values, we receive a massive 3-page table of statblocks by CR, which range from none (for e.g. familiars) to CR 10, including the pages on which they can be found. A list of encounters by CR also helps the DM.

Now if you haven’t noticed it – this is MUCH longer than the two Random Wilderness Encounters-pdfs – it also includes the 2 random woodland encounters-pdfs, random marsh and hill encounter AND a vast array of he encounters Creighton Broadhurst makes for Rite Publishing’s free monthly e-zine, collecting a vast array of content in one handy tome.

Now I have written reviews for all of them, often going into detail regarding the respective encounters. Thus, in order to avoid undue redundancy, I won’t go through them AGAIN and instead answer a question you might have – Is this worth the asking price?

To answer this question, I’ll have to go on a slight tangent. As much as skipping them is helpful to keep the story moving, it is my firm believe nonetheless that quite a few modern modules suffer from an absence of properly detailed random encounters. No, I’m not talking about the old Final Fantasy-style grinding marathons (nobody liked these!), but rather those that could provide more local color, that did not necessarily stand out from regular encounters. A random encounter can go a VERY long way in increasing the immersion of players into a given world – when handled properly, they can convey a much more believable illusion that the world does not simply exist for the PCs, that they are just a small part in a world. A giant spider feasting on an orc may be more than just a throwaway combat – it may serve as an omen, as foreshadowing and it may be an adventure hook in itself. When handled properly, even the most random of encounters can vastly enhance the cohesion of a campaign and deliver most unexpected attachments and ways for the PCs to interact with their world.

The encounters collected herein, while often sporting combat, do extend to other approaches, also including salvage operations, diplomacy and the like, providing a nice array of diversions. Better yet, the organization of the respective encounters actually constitutes a significant improvement over the constituent pdfs, with a chapter on desert-themed encounters (formerly mostly Wilderness Encounters II) and the random mountain encounters can and should also be explicitly mentioned.

Beyond that, though, the encounters excel in one particular area – in how ridiculously easy they can be used. Does the encounter sport aerial combat? You’ll see a short summary of relevant rules. Bandits blocking the path with a fallen tree? The tree will have DCs assigned to climb it…and so on. The attention to detail, more often than not, can simply be considered awesome and makes it quite literally possible for the DM to just open the book and run the encounters on the fly sans preparations.

Editing and formatting, as often with Raging Swan Press, is top-notch – I noticed no significant glitches. Layout adheres to RSP’s two-column b/w-standard, with thematically-fitting b/w-art. The pdf comes with excessive, nested bookmarks and the pdf does additionally come in two versions, with one optimized for screen-use and one for the printer. I can’t comment on the quality of the print-version since I do not own it.

Now for my part, I can’t tell you whether this compilation will be worth it for you if you already own the component pdfs – while I usually print out all pdfs and thus have the paper ready, former print editions by Raging Swan Press have shown me that their excellent organization can actually make you use them more and easier than the component files. My prognosis is that this also holds true for this book. The collection of the Pathways-encounters can be considered the cherry on top of this extremely convenient book. If you don’t have the constituent pdfs, this is very much a must-buy 5 stars + seal of approval file. If you do, though, the decision mainly boils down to convenience as a factor. All of that out of the way, this pdf somewhat suffers from having a horribly difficult legacy, seeing how RSP’s “Caves & Caverns” essentially set a new standard for underworld encounters in both style and substance. Hence, as far as my general verdict is concerned, I will settle on a final verdict of 5 stars – this is an excellent book with a superb bang-for-buck ratio, just short of true brilliance.

You can get this huge collection of cool encounters here on OBS and here on d20pfsrd.com’s shop!