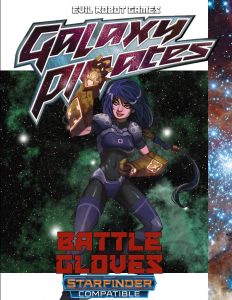 This little pdf clocks in at 4 pages, 1 page front cover, 1 page SRD, leaving us with 2 pages of content, so let’s take a look!

This pdf fixes a very specific issue via equipment – this is its sole focus, and something to bear in mind. Armor Storm soldiers with Hammer Fist, and the glove is supposed to duplicate the effects of the item level of a heavy or powered armor. The core book is rather limited regarding its battle gloves, but it’s clear that you’re not supposed to have a paltry 1d4 punch in SFRPG, where the system very much requires the increase of weapon-damage.

This book, thus, presents new battle gloves, based on the one-handed damage charts; these are analog or powered, light weapons sans critical effect, and the table-header properly classifies them as basic melee weapons. One battle glove for every level is provided. All of the design-concerns above are concisely explained. Even better (a GOOD thing for high-complexity games like SFRPG), the reasoning is explained to the GM as well. And the math checks out as well – costs, damage, and item-levels are balanced so unarmed combat options hard-coded into the system are not invalidated.

This is per se great. But there is one downside to the battle gloves herein: Due to needing to adhere to the power-curve of unarmed attacks, there are a couple of battle gloves that have the same base damage, with the higher-level version just…costing more. This is a “damned if you do, damned if you don’t”-situation, though, so I get the reasoning behind this decision. That being said, there’d have been an obvious solution. Critical effects and special properties. While easy enough to add and modify, these could have been used as additional balancing tools – perhaps exchanging lower damage for effects or the like.

Editing and formatting are good, I noticed no significant hiccups on a formal or rules-language level. Layout adheres to the neat two-column full-color standard of the Galaxy Pirates-series. The pdf has no bookmarks, but needs none at this length, and the color artwork is solid.

Paul Fields and Jim Milligan deliver an inexpensive, handy little supplement that makes Hammer Fist more viable. In that way, the pdf succeeds admirably. When it comes to differentiation between item-levels, the same can’t be said. This is a very focused item supplement, and in its niche, it does its job. Now, I’d usually harp more on the issue between item-levels and lack of differentiation, and round down from my final verdict, but this does have one crucial advantage: It costs a grand total of $0.99. What can you get for that nowadays? Where I’m living, you can’t even get a coffee at the student’s cafeteria for that. If you’re a student. Considering that, well, I do feel justified in rounding up from my final verdict of 3.5 stars. However, if you’re just looking for the items, and not for some help with the Hammer Fist ability, you may wish to round down.

You can get these gloves for less than a buck here on OBS!

You can support one of the authors here on patreon.

If you like my reviews, please consider a direct donation via paypal, or joining my patreon here. Thank you.