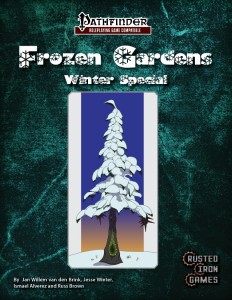 The second of Rusted Iron Games’ extra-long specials in the Deadly Gardens-series clocks in at 12 pages, 1 page front cover, ~1/2 a page editorial + SRD, leaving us with ~11.5 pages of content, so let’s take a look!

Okay, so this pdf begins somewhat different than one would expect, introducing us first to the realm of eternal winter, a demi-plane of eternal ice…and otherwise sans unique planar traits, which is a bit of a missed chance there. The pdf provides two magic items – the first is the Cask of Ancient Winters, which, when opened, spreads lethal cold and enhances associated magic, while the second is Winter’s Edge, a frosty short sword that, as a swift action, may turn into a longsword or dagger while also providing endure elements. Rather interesting: The wielder can 1/day perform a melee cone-attack of cold and piercing damage, based on regular attack damage, with creatures beyond the primary target receiving a Ref-save to halve – but this leaves the blade gone…which is no big deal, since it can be regrown as a move action. Same goes for when it’s broken. Unique, evocative and cool in both flavor and crunch-departments, both of these items are killer and awesome.

Now, even better than that, we get 7 terrain types for finer graded depths of snow or adventuring on glaciers and 6 entries of winter weather. Beyond these, 6 specific hazards, both supernatural and mundane, await – including crevasses and frost wheat patches. And yes, fields of seracs and how to navigate them…covered. Awesome!

The first creature herein, the Prickly Cold Pine at CR 12 can cause coniferous trees to emit auras of needles, create clouds of them that hamper vision, swing branches or utilize the classic grasping roots – nasty! Oh, and the killer trees can thrown spiked pinecones at foes. The full-color artwork looks a bit goofy, but honestly, who cares – the creature is pretty awesome and a versatile lethal foe – adventurers may well not realize what hit them! Two thumbs up!

The second creature herein is the CR 6 Shivervine, which sports an aura of cold and a nasty death throes-ability. beyond that, they can fire petal spines and perform slam attacks…oh, and the tendrils prevent those grappled from casting spells…ouch! And yes, the slams have the grab quality. On a nitpicky side, while the flavor text specified this, it took me a bit of time to get which of the attacks cause blood drain – it’s obviously the melee. Apart from this hiccup, a well-crafted ice-flower of the more lethal kind with a gorgeous b/w-artwork.

This is not where we end, though: The next creature would basically be a killer snowman, the CR 6 Snow Goon, which is a sentient, evil construct that comes complete with crafting information and fatigue-inducing criticals. If that’s not your CR-range, well, there also is an upgraded CR 12 version herein that can throw lethal snow-boulders and has nastier SPs. (Yes, again, including crafting-info…) Someone was traumatized by the 5th Battletoads level it seems… 😉

The pdf also contains 6 natural items – the yeti pelt helps you keep warm, while frost wheat can be brewed into perpetually cool beer…yes, I can see that spawning caravans and modules: Escort the beer from the frigid north to the desert kingdoms! Living snowboulders and snowballs and a whip made from shivervine tendrils as well as the spiked prickly cone pine pinecones complement this section – and yes, we do receive well-crafted power-component entries for living snowballs and spiked pinecones.

Editing and formatting are very good – apart from the minor hiccup and one artwork being VERY close to the text, I noticed no issues and these are, honestly, negligible. Layout adheres to a two-column color standard and artworks range from color to b/w, though the shivervine’s b/w-artwork herein is by far my favorite. The pdf comes fully bookmarked for your convenience.

Russ Brown, Jesse Winter, Ismael Alvarez and Jan Willem van den Brink have crafted a great little pdf: Granted, I was not blown away by the killer snowmen or the demiplane, but everything else is awesome – the magic items are evocative and feel magical and the two plants are both superbly twisted beasts. Add to that the cool mundane natural items and power components and we have a well-crafted book for a more than fair price-point. My final verdict will hence clock in at 5 stars.

You can get this cool (haha) collection of monsters here on OBS!