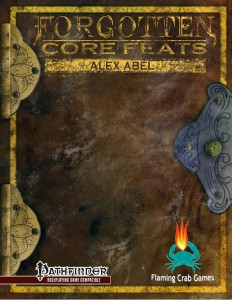 Without an introduction, but thankfully with a table that lists the feats herein, we delve right into the meat of this book, so what do we get? Feats. A lot of them.

-Boon Pack: Animal companions and familiars are treated as druid level +2, up to a max of character level. Stacks with boon companion. Essentially a second feat for a total of up to +6 levels animal companion/familiar progression. Nice for multiclass-chars.

-Defensive: +2 to CMD and +2 dodge bonus to AC. Bonus is lost when losing Dex-bonus to AC.

-Efficient Crafter: Reduce magic item creation cost by 10%, craft magic items in half the time. This is much more powerful than you’d think. Crafting is already something you can do pretty quickly and reducing the gold it costs can be nasty if your players are like mine and craft a lot. In such contexts, this may be problematic. In others, it may be very useful.

-Expanded Bloodrager Spell List: +1 sorc spell per spell level to bloodrager spell list. Can be taken multiple times. Oh boy. For one, massive scavenging in one of the most powerful spell-lists. Secondly, does this make the spell known for the bloodrager or not? I assume the latter (the feat already being OP), but slightly more precision would be nice. Also: Can the class learn a spell that is both on bloodrager and sorceror lists at different levels, preparing the spell at two different levels? Not gonna get anywhere near my table.

-Expanded Paladin Spell list: Same deal as with bloodrager, only allows for cleric-spell-scavenging. Less powerful in comparison, but still problematic.

-Expanded Ranger Spell List: Same as the above, only for rangers receiving druid spells. Same criticisms as for palas apply, with the note that rangers getting druid crowd control being pretty nasty, nastier than the pala-feat (since palas already have pretty elite buffs…).

-Expert Tumbler: Lacks a verb. Lets the character ignore Str-mod and size modifiers regarding Acrobatics DCs to move through threatened areas. This is situational, but when it comes into play, extremely powerful -most dragons and giants won’t be able to hit a character using this feat reliably. I like the visuals…however, I think one of the two modifiers would have been more appropriate for one feat. Either you love this one, or you’ll hate the bouncy agile character further mitigating the threat of big Str-based threats.

-Extended Wildshape: Double wildshape duration. Yeah, you read right. For one feat. BROKEN in some contexts, useless in others. Next.

-Firearm Mastery: Reload a firearm as a free action. Requires Point Blank Shot, Rapid Shot and Rapid Reload. Broken as F***. This horrid piece of crunch eliminates the balancing mechanism of firearms and surpasses quite a few class abilities in power. One of the most broken feats I’ve seen in a while.

-Goliath Grip: Wield a weapon one size larger at -2 to atk and “the amount of effort it takes to use the weapon increases” – it’s clear due to the example what’s meant: 1-handed weapons become two-handed. I applaud what this tries to do regarding weapon-class etc….but what about finesse weapons? Can they still be finesse’d? Do one-handed light weapons become 1-handed regular weapons or 2-handed weapons? A precise sequence is required to make this feat work properly.

-Greater Combat Reflexes: +2 AoOs per round, +2 to atk with AoOs. No complaints here.

-Half-Blood: Gain an alternate racial trait of your race or a standard racial trait of another race. This comes with a GM-approval disclaimer…the only reason I’m not frothing right now. Still, not all racial traits have the same value and the hand-waving of this feat is just sloppy, highly problematic design.

-Impressive Strike: When hitting critically, you deal + sneak attack damage. Not a fan, since crit-fishing agile builds can be pretty nasty. Still, the rogue can use it.

-Improved Favored Class: Gain two favored class bonuses each time you take a level. Benefits are retroactive. This feat is okay when restricted to hp and skills…but it’s not. It can be used to get much quicker access to fraction-based favored class options, halving e.g. the levels it takes to gain +1/6-based FCOs. Broken, not gonna get near my group.

-Improved Flank: +1 damage versus foes you flank, increasing by +1 at 4th level, +1 every 4 levels thereafter.

-Improved Furious Focus: When wielding a two-handed weapon or a one-handed weapon in two hands while using Power Attack, you do not suffer Power Attack’s penalty (but still do so for your AoOs). Power Attack is already one of the strongest feats in the CORE-rules. It does not need this feat, which also eliminates its tactical component – with it, you simply ALWAYS Power Attack. No decision, no tactics, gets nowhere near my table. Undermines the base-feat’s intention, which is bad game design in my book.

-Improved Turning: Deal channel energy damage to undead you turn. Has a good idea – but mitigates the save usually allocated to channel energy, so no negating on a successful Will-save RAW. Can be easily salvaged, but broken as presented.

-Improvised Weapon Proficiency: You’re proficient with improvised weapons and get +1 to atk with them. Also doubles as Weapon Focus for prereq-purposes. Unfortunate overlap with Improvised Weapon mastery, which increases the base damage. On the plus-side, the Weapon Focus-caveat is something Paizo’s feat should have had. Still, pretty useless.

-Intuitive Spellcaster: Gain +4 caster levels, up to a maximum of your HD. Can be taken multiple times to apply to different spellcasting classes. EDIT: I wholeheartedly believe in standing up to my own failings – so there you go: I colossally, terribly and unforgivably misread this feat in a titanic brain-fart of epic proportions. I hereby apologize profusely for this horrid blunder and would like to thank Sayt for pointing it out.

-Iron Palm Technique: Use Con-mod instead of Str-mod for unarmed strike damage. Not a fan per se, but okay.

-Magnified Spell: Increases maximum number of damage dice by 10 levels at the cost of 2 spell levels. This would e.g. allow a 20th level caster to cast 20d6 fireballs as 5th level spells. Does not work. Name 3 5th level spells, even among all 3pp books, that can deal AoE 20d6 at 5th level. Yeah, thought so. Delayed Blast Fireball is 7th level… Damage-output is off, broken.

-Quick Sheath: Put a weapon away as a free action instead of as a move action. Dreamscarred Press’ version of the feat, Lightning Swap (Path of War, pg 23.), is more precise and better balanced, in spite of having an additional benefit. Ignore this iteration.

-Reflect Arrows: Return arrows to sender at -4 to atk and using Str-mod. This uses up an AoO. This feat isn’t bad (though wording is a bit non-standard), but its image is pretty ridiculous when used against BULLETS, arrows or bolts. Oh, and RAW, it can return rays and the like to sender as well. Broken.

-Second Skin: Wonky wording; reduces armor check penalty by 2, to a minimum of 0.

-Underhanded Blow: When using Weapon Finesse, use Int-mod for damage instead of Str-mod. This is not increased by two-handed weapons, but oddly, it does not decrease for off-hand weapons, which makes this way of wielding them very complicated.

-Vicious Cleave: Use Vital Strike’s feat tree WHENEVER YOU CLEAVE. Since this does not require Vital Strike to trigger the cleave, you can abuse the hell out of this feat. Broken.

-Vicious Opportunity: Always Vital Strike when AoO-ing. Urgh. At least not as bad as the former.

Editing and formatting are still good on a formal level. On a rules-level, there are quite a few non-standard wordings in here that are detrimental to the reader’s ability to properly understand the feats and some clear deviations that render RAW vs. RAI more nebulous than it should be. Layout adheres to a relatively elegant 2-column standard with a colored border and nice b/w-artworks. The pdf has no bookmarks, but doesn’t need them at this length.

This was one of Flaming Crab Games’ first offerings and the relative inexperience does show. Author Alex Abel has a decent grip on how general rules-wordings work – but the experience with the finer intricacies was obviously not (yet) there – there are a lot of feats in here that either are redundant, open issues in the rules-languages or ones that jam “fixes” (read: blatant power creeps) in. Which is unfortunate, for this pdf, on the other side, has some downright brilliant, cool ideas that render a few of the feats herein exceedingly fun indeed. That being said, the low asking price does also help to (somewhat) remedy this pdf. While still highly problematic in quite a few cases, an experienced GM can scavenge some small, but seriously cool gems from this crackerjack box. My final verdict will hence clock in at 2.5 stars, rounded down in spite of the low price and the newbie bonus – while there are gems in here, the majority of the feats herein has an issue or another.

You can get this inexpensive pdf here on OBS and here on d20pfsrd.com’s shop.