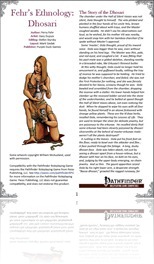 This pdf from Purple Duck Games is 11 pages long, 1/2 a page editorial/artwork, 3.5 pages of SRD/advertisement, leaving 7 pages of content for the Dhosari, so what exactly are they?

Dhosari get +2 to Str, +2 to Cha, -4 to Wis, are large and have an upper Torso extending from the shoulders of a fully sized human body, have a base-speed of 30 ft. and since they move on their legs and 2 of their arms, they gain +4 CMD against trip, +2 to climb and perform, may bond with an ally to gain +1 on atk against an aggressor of the ward and may rear up on their hind-legs as a full-round action to bring all 4 arms to bear, taking a penalty of -1 to ability checks and attacks. Fluff-wise, the Dhosari are the slaves of the Erkunae.

The race gets 4 well-balanced race traits, 6 alternate racial traits (making e.g. the Dhosari faster, but unable to rear) and 7 new racial feats: From exotic weapon proficiencies to the ability to trample foes, carry two shields when rearing and even serving as a mount, One feat takes the cake, though: Dance of arms grants you ANOTHER attack when using a full attack and flurrying and standing on the legs – at -2. I’m not sure whether the penalty is cumulative with flurry of blows. 4 arms. Multiattack, flurry of blows – SICK.

We get a discussion of the race and its take on classes and 7 favored class options as well as a level 1 sample paladin. Since the Dhosari are quadribrachial, paladins of the race can gain a kind of biped eidolon at summoner level -2,while cavaliers get a heroic npc with class-levels equivalent to a druid’s companion’s HD. This takes a powerful race bordering on broken and makes it sickeningly powerful. Not gonna happen in my campaign – ever. In contrast to regular animal companions/mounts, these companions have a much higher chance of getting appropriate weapons and gear and eidolons are powerful for the summoner – to supplement the already powerful paladin-class utterly breaks this option for me.

Editing and formatting are ok, I didn’t notice jarring glitches, although I would have e.g. liked the flavour-text of the feats to be in italics in order to better separate it from the crunch and felt that formatting could have been tighter. Layout adheres to PDG’s 2-column standard and the pdf has no bookmarks, which is a pity. The one piece of artwork is nice, though you may already know it from Monsters Unleashed. The Dhosari are a cool concept indeed – the basic idea for this strange race of slave creatures is awesome and the cost of a full-round action for rearing up and bringing all four arms to bear is nice.

However, I feel a further restriction would be in order for the 2 additional arms, especially with the racial feats and e.g. a monk-class , they make for a deadly PC – especially since rearing up does not cancel the stability of the race. The cost for rearing up and which penalties are cumulative are fuzzy, at least for me: Is the penalty for rearing up cumulative with the -5 or -2 penalty for secondary natural weapons? What about the Dance of Arms-feat? Do the penalties stack? What about flurry of blows and the interaction with the feat? Especially with a rule that is such a hotbed of rules-interpretation/clarification, an additional section helping the player would not only have been helpful, but rather all but required, at least in my opinion. And then there are the Paladin/Cavalier-options, which are SICK. Eidolons are powerful, but giving a four-armed paladin an eidolon-rider is insane.

That’s also my basic gripe with the race – the Dhosari are VERY powerful – too powerful for my conservative tastes. Also: Can they e.g. wear a magical ring on all 4 hands? Being quadruped and gaining access to a whole slew of potentially game-changing moves (4 magic weapons…) in addition to the ability to use two shield bonuses and stack them, there are oh so many ways with which to abuse them – If you build a Dhosari-tank, you’ll see your foes CRINGE. That being said, as a monster-race, I can see DMs having fun with this. As a player-race, though, I’d rather eat the core-rules before I allow them as written. My final verdict will thus be two scores: 3 stars as a DM-monster-race, 2 stars as a player-race. My final verdict will reflect the latter due to them being intended as a player-race.

Fehr’s Ethnology: Dhosari is available from: