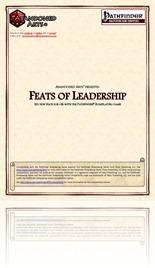 There are 10 feats of leadership herein, so what do they do?

Editing and formatting are not top-notch: There is a lazy cut-copy-paste error here and honestly, at this length, that’s not something that should happen. Layout adheres to Abandoned Arts’ no-frills 2-column standard and comes sans bookmarks and artworks, but needs neither at this length. I’m a huge fan of the leadership feat and so are my players, but oh boy was I disappointed by this pdf. In contrast to SGG’s alternative versions of the leadership feat, this pdf has the aim to expand the benefits granted to followers and at least for me, it fails to do so.

The supplemental character of followers and their relatively low level means that the PCs usually have some heavy buffing to do if they want to drag them into battle and, well, the feats herein honestly don’t help much, with bonuses granted ranging from paltry and simply not enough to being rather on the strong-side with the mass-endowment of slippery mind. On the fluffy side of feats, Redeemer and Righteous Cause make for good takes, though I also would have wished for them to have more significant repercussions rules-wise: Righteous Cause works via a Charisma-check and honestly, it feels more like a skill-check to me: A table or something like that would have gone a long way to make that on better. Competent Cohort is an interesting feat and a good way to go, but honestly, in the end most of the feats herein felt to me rather uninspired, boring or balance-wise not exactly all hunky-dory. Since the amount of good ideas herein is rather small, the overall use of this pdf to respective leaders should be not to significant. In the end, I’ll thus settle for a final verdict of 2 stars.