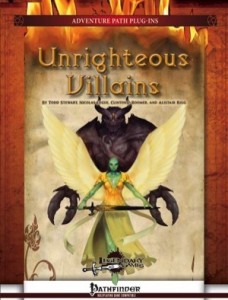 Now while this book is intended to provide additional adversaries to the Wrath of the Righteous AP, it should be noted that more so than many other Adventure-path-plug-ins, this book and the villains herein do in no way need this connection and can easily be introduced into non-AP contexts – especially due to not making that heavy use of the Mythic Adventures-rules, meaning that even non-mythic campaigns get their due with this pdf.

So what kind of adversaries do we get herein? Well, the first would be the Unique Quasit-bound demon sorceror Terracg p nmvczy. No. Not a Typo. I didn’t fall asleep at the keyboard. In a cool twist, this creature’s name is also written in a strange , glyph-like font that makes identifying its proper name hard. Now the catch is – this creature is the fragment of a greater demon and is usually encountered as something saved from demons – becoming a kind of foul-mouthed sidekick for its mortal masters, one with a keen intellect…and one that is nigh impossible to get rid of. BRILLIANT. The additional hooks provided further cement this creature as something I will gift my PCs with…

Koyo-Shojaxus is a more straightforward adversary – at CR 13, the babau martial artist 7 makes for a deadly adversary and a vile variant of the wandering martial artist-trope. Neat! The CR 13 succubus gunslinger (mysterious stranger) Lilevyrrin gives new meaning to the moniker of femme fatale by pairing both deadly prowess and her succubus heritage’s “needful things”-style manipulation-capabilities into a glorious package of mayhem. And that’s before her Glabrezu lover/mortal enemy enters the fray…

Malcaedix, the shadow demon rogue, takes one of the most powerful creatures for its CR and amps it up to CR 10, adds a new feat for better possession and makes for a strange creature – unlike many demons, she is subtle. She actually cares for her hosts and does her best to eliminate threats to her host…which may include any and all people said person cared about or even those that mildly offended the creature. As a kind of dark guardian angel, she also doesn’t deal well with rejection, meaning you’ll better be able to fend her off if you question all the good things that happen to you… Awesome and the potential for actual deep, psychological conflict and moral questions as well as roleplaying is vast here.

Ser Meridrand Palisard, the disgustingly fat human antipaladin/low templar with an implanted demonic graft for a stomach makes for a truly vile and disgusting cannibalistic foe, who further adds to this imagery with his equipment -a disgusting, bloated individual, a fallen champion and deadly to boot at CR 15, this erstwhile paragon is a great adversary for a “Through a mirror, darkly”-type situation, when the PCs realize how fragile the sanctity of their alignment truly is and how easily they, too, can fall into the clutches of the Abyss and its servants.

Mons’ Verix, the CR 16 Glabrezu-summoner also has a very cool twist – his eidolon looks like an angel. With this tool of deceit, the creature may fool even the most stalwart of heroes and lead them on the first steps of the downward spiral of temptation if played properly – a cool idea indeed and with all the magic capabilities of the creature, one supplemented by the proper magical oomph! As a minor complaint, the final page of his entry is half empty – more story could have easily fitted in there.

Now so far, we’ve had next to no possession – so what about a demon-possessed inquisitor/assassin build with the erstwhile witch hunter Count Ulus VonKaval? It should be noted that the count is the one character herein who does not get an awesome, original piece of full color artwork, but that does not detract from this example how pride vo make even the mightiest fall.

Finally, at CR 15/MR 6, Dasnikynlin, the mythic coluxus demon with the awesome artwork, its mesmerizing drone, charisma damage AND bleed-damage causing bite, death attack and vicious mythic spell-like abilities makes for a powerful final entry, though one that could have used a unique story-expansion herein. EDIT: I’ve been made aware that this is the demon that is supposed to be the possessor of Ulus VonKaval and yeah, that works. However, I still would have loved a full-blown ecology-level detailed write-up like the ones in the Mythis Monster-series. Oh well!

Conclusion:
Editing and formatting are top-notch, I noticed no significant glitches herein. Layout adheres to Legendary Games fiery, slightly orange-tinted standard for Wrath of the Righteous-plug-ins and the pdf comes with bookmarks for your convenience. The artworks deserve special mentioning here, for almost all adversaries receive their own, glorious full-color pieces, sometimes even on a full-page spread.

Alistair Rigg, Todd Stewart, Clinton J. Boomer and Nicholas Logue – notice something – yeah, these guys have in common that they know how to WRITE. I don’t mean “write a supplement”, but really WRITE. Evoke moods, atmospheres and multi-layered characters. It’s easy to delve into the “wants to destroy everything due to being EVUUUL”-trope with demons and the adversaries herein almost universally manage to avoid this, instead being round, nasty individuals that make sense in a twisted way, providing roleplaying opportunities aplenty, not just within the context of Wrath of the Righteous.

In fact, the writing is so good that you really, really want to use these villains – almost immediately. This miniature rogue’s gallery definitely provides some of the most depraved adversaries I’ve seen in a while – and that is meant as a compliment. But that wouldn’t be enough if their statblocks were bland or boring. They aren’t. While not all statblocks reach the level of complexity I tend to enjoy in NPC-builds, a couple of them do and that, coupled with the awesome writing, is enough for me. Add to that the slight touches – like aforementioned glyphs, like demonic trysts gone wrong, the evocative adventure hooks – and we have a grand collection of villains, well worth 5 stars + seal of approval – legendary indeed!

You can get these awesome foes, not only for Wrath of the Righteous (or Mythic!) campaigns here on OBS and here on d20pfsrd.com’s shop.