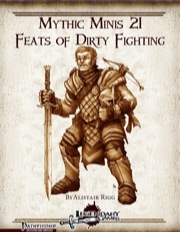 This Mythic Mini about dirty fighting provides 7 new mythic feats, so what do we get?

-Broken Wing Gambit: You need only hit touch AC, but only deal damage when hitting regular AC. Use one mythic power to allow one ally per 2 mythic tiers to allow allies to make AoOs by expending your immediate action as if they had Broken Wing Gambit.

-Felling Smash: Felling Smash as a free action, or sans Power Attack penalty as a swift action. If you already may mitigate said penalty in favor of better tripping. This one’s wording is slightly ambiguous and could have potentially been phrased slightly more concise.

-Punishing Kick: Increase DC by 1/2 tier, target may end up in unsafe squares and you may bull rush multiple foes. Mythic power can be used as a resource for daily punishing kicks. Neat!

-Vicious Stomp: Use mythic power as swift action to make unarmed attacks against prone targets. Also makes standing up harder from being stomped.

Alistair Rigg’s mythic takes of dirty fighting rock – they are deadly, cool and do not follow formulaic mythic structures, instead coming with cool, unique effects that, more often than not, are inspired. Thus, my final verdict will clock in at 5 stars.

You can fight really dirty with the pdf here on OBS!