Threats: Dawn of the Dwimmerlaik (Diceless) 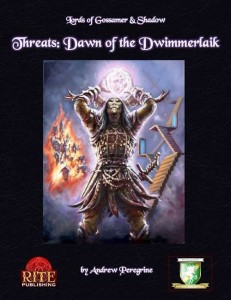 As per the tradition by now, this sourcebook is written in glorious in-character-prose and depicts documents of the dwimmerlaik – a narrative by one of these threats in LoGaS, taking a cue from LPJr Design’s “First One”-pdf and doing something smart – establishing from the get-go that, what follows, are lies. The origin-myth depicted, analogue to Shakespeare’s Tempest blended with several classical topoi from mythology, starts with the ascension of the race, elevation from shackles and wilderness and the overcoming of an all-powerful, Typhonian god-like father-figure (though the latter should be taken not in the nourishing way…) to the awakening into autonomy and a new racial self-consciousness that resounds even in nomenclature: The Dallaik became the Dwimmerlaik, “That which is superior.” From there, the race set out to erect their world-spanning empire.

Now it should be noted that 2 cool 5-point powers for exalted channeling are provided here as well – one to project one’s astral self to other worlds (and if you require inspiration there, just read the weird fictions of old for a vast array of potential hooks to use this…) and one that allows astral projecting dwimmerlaik to place marks while projecting – these work as a kind of tracing beacon…and if you don’t have about 20 different great ideas for stories resolving around the combination of these powers by now, think harder or drop me a line. Seriously, these are narrative gold.

Now the weapons/artifacts of the first Dwimmerlaik, those that vanquished and consumed Eos, are also are depicted in here, as is a list of the 8 houses of the race – a kind of rigid, caste-like system. However, the genesis of the race demanded retribution from the nigh-all-powerful Typhonians. While the battle was fierce and indeed, yet another of the beings fell, the resulting onslaught saw the dwimmerlaik at the verge of extinction, with reality, the grand stair or *something* intervening and saving them, destroying Selene, their adversary – at terrible cost for their homeworld Caliban as well as for numerous worlds.

We also are introduced to a ruthless meritocracy as a culture, placing strength above all and seeing lies as a means to end, as a device to prove cultural superiority and expose weakness – a compelling dystopia. The somewhat ancestral worship-like basis of their religion is interesting – the dwimmerlaik essentially create a Grand Narrative in the traditional term – their devotion belongs to the conglomerate history they create, the representation of the collective of their achievements and failures as well as their own unconscious, by the very definition of their object of worship. Glorious and potentially enlightening, this takes the concept of a historic pluralism and makes it work in context of a society by acknowledging the need for a grand narrative on one hand, while on the other putting it into a relativistic perspective by their ideology regarding truth. Glorious and so full of potential!

Birth and Death, life and recreation (like psychic duels called Shayde) are also explained. The Gossamer Lady that delivered this document gets btw. full stats, as does Cicarus, the legendary Witchknife dwimmerlaik assassin and the guardian of Caliban, the oldest of Dallaik and final chronicler of the race. Yeah. Awesome.

Editing and formatting are top-notch, I didn’t notice any glitches. Layout adheres to RiP’s two-column full color standard, with most of the artworks being top-notch original pieces of the highest caliber, while some others are thematically fitting stock. the latter is the minority, though. The pdf comes fully bookmarked for your convenience.

Writing an ecology on arguably the primary antagonists of the LoGaS-setting must have been a daunting task – first one requires a society that is sufficiently unique to not elicit yawns when compared to similar races throughout fantasy. Secondly, LoGaS, more than any other setting, thrives on ambiguity, on the option to develop ideas and determine truth. These seem to directly contrast what one would require from an ecology-style book.

Author Andrew Peregrine found an elegant and exciting way to circumvent this conundrum, by providing ample doubts…and via a subtle trick: Much of the respective narrative potential rises from the deliberate blanks in the interaction of potential truths in here, weaving a stunning panorama of world-spanning and epic confrontations, strange creatures and a society alive and organic…and mysterious. This book is an inspiring joy to read an well worth 5 stars + seal of approval, not only for LoGaS-players and DMs, but also for those starved for inspiration for their own world/plane-spanning antagonist empire…

You can get this supplement here on OBS and here on d20pfsrd.com’s shop – unleash the Dwimmerlaik!