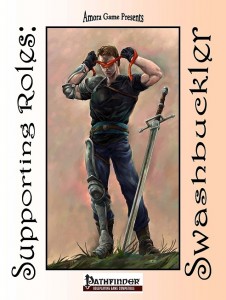 So…we get another take on the Swashbuckler. Yeah. I wasn’t looking forward to that one. This particular take is a base-class that gets d8, 6+Int skills per level,3/4 BAB-progression and good ref-saves as well as proficiency in light and medium armor and with simple and martial weapons. No spells and only 3/4 BAB-progression? Yes, for the class gets an ability that is called “Flash of Steel”:  This is a full-attack action that allows for an additional attack as if using the two weapon fighting feat – now here’s the catch: Flashes of Steel use a different BAB equal to the class level (but the usual penalty for two weapon fighting is applied). At higher levels, the swashbuckler gains more additional attacks. Among other things, the swashbuckler may use disarm and trip and uses the full str-bonus when using Flash of Steel. What’s missing imho from the ability is clarification whether this ability counts as two weapon fighting for the purpose of feats and abilities and whether it can be stacked with flurry of blows and similar abilities. The ability also lacks the specification whether CMB for disarm and trip-maneuvers as part of flash of steel is calculated with the flash of steel-BAB or the regular one. They also get weapon finesse at first level.

2nd level is imho when the class gets interesting, with the extraordinary ability Parry: Whenever making an attack action, the swashbuckler may forego one or more attacks of up to dex-mod attacks. At any time before his next turn, the character may hence use the omitted attacks to parry incoming melee attacks – I assume this is not an action, but the pdf fails to specify what type of action it is. Essentially, s/he attacks and when surpassing the incoming attack, the swashbuckler may negate it. Unexpected attacks from e.g. charmed adjacent allies and larger creatures are harder to parry, incurring a -4 penalty. The class also gets bonuses to initiative, half class level to Diplomacy and Bluff-checks, increasing AC-bonuses when dual-wielding weapons, dex to melee damage when using weapon finesse, increased weapon dice for light or one-handed piercing weapons or rapiers (including a table) and another ability makes a comeback:

Due to luck’s favor, the swashbuckler may decrease falling damage (by landing in the iconic haystack etc.) and at 8th level, the swashbuckler may use an AoO after a successful parry to make a counter-attack on a creature within range. At 1th level, swashbucklers may even maintain parries when moving and make attacks during a movement. S/he also gets improved uncanny dodge and may even move over difficult terrain. At the very highest levels, swashbucklers get a defensive roll, may roll death-defying skill-checks twice and as a capstone, may combine a full attack action with a move action.

We also get a new feat that decreases the penalty incurred to parry ally-attacks down to -2. Very specific and not particularly cool.

The pdf also features several new archetypes for the swashbuckler (which were added as a “thank you” to loyal customers – very nice and commendable from Amora Games!), first of which would be the Blind Swordsman – who only gets proficiency in one sword, but gain blindsense when unable to see and several sense-based abilities. The Fencer suffers from having the incorrect proficiency-listing – the one from the blind swordsmen shows up here again. 1/day, they may challenge to a duel and perform flash of steel with only a rapier, lunge and follow feints up with an AoO. Flamboyant swashbucklers work better when surrounded by foes and may influence crowds with intimidate. “Sword and Pistol” is an archetype that nets the amateur gunslinger feat and allows the archetype to use his/her firearm to supplement his flash of steel. Masked Vigilantes get a code of conduct (which must be lawful – but why? What about chaotic freedom fighters in a despotic regime?) and get bonuses to intimidate and net allies bonuses against fear. Weirdly, the class gets detect evil – which makes e.g. less sense for evil masked vigilantes and they may also grant their weapons temporarily the bane quality.

Editing and formatting is ok, though not perfect – aforementioned proficiency-issues, minor inconsistencies here and there and punctuation glitches can be found. Layout adheres to a relatively printer-friendly 2-column standard with full-color artworks and the pdf comes fully bookmarked – two thumbs up for that!

Authors Kevin Bond and Ryan Cramer have created a neat base-class with some cool mechanics that actually works. While the editing could be tighter, overall, the crunch is solid and features several rather nice abilities. While Parry is not a particularly ingenious ability and could slow down play, it works and overall, I’m actually a fan of the class and consider it one of the better takes on the swashbuckling-trope, even though some minor ambiguities remain.

In fact, I’d probably rate this higher, were it not for the immensely high standard Dreadfox Games’ superbly complex Swordmaster-class has set. While said class is HARD to learn and nothing for beginners, the Swashbuckler has one flaw that prevents it from reaching the highest rating-echelons – it’s linear. Very, very linear. Talents? Paths? Any choices on the side of the player? NOPE. None. This severely impedes the replay value of the class and makes swashbucklers feel imho too similar to one another. Combined with aforementioned glitches, this drops the final rating down to 3.5 stars, rounded down to 3 for the purpose of this platform – at least until the glitches have been purged, after which this should be considered rounded up.

You can get the Swashbuckler here on OBS and here on d20pfsrd.com’s shop!