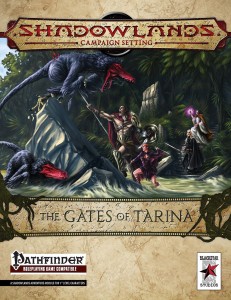 This module is 56 pages long, 1 page front cover, 1 page blank inside the front cover, 2 pages of editorial, 1 page SRD, 1 page ToC, 3 blank pages, 2 pages of advertisement, 1 page back cover, leaving us with 45 pages of content, so let’s take a look, shall we?

Still here? All right! First of all – this module is intended for use with the Tarina Guidebook – which, more than a year after this module has come out is nowhere to be seen, so I’ll treat this hypothetical book as if it did not exist and ignore any reference to it.

That out of the way, let’s take a look at this introductory adventure for the Shadowlands world of Sæmyyr. After a synopsis and extensive Dramatis Personae, the adventure kicks off with a bang – a dying man falls of a galloping horse with one final message and a package – “Tell Larke, tell the Brotherhood, tell the Knights: They are coming.” The “Brotehrhood” of course referring to the Brotherhood of Magus, the “Knights” pointing towards the “Knights of Kashouli”. The man strangely seems to have been poisoned and also bears claw marks… Getting to the prospective people to inform is the first challenge – the guards of Tarina are not known for being unbribable, though, and hence, the trail leads onwards – the Bortherhood tells the PCs that the package was holding a contraband sword and asks them to hunt down the missing weapons – for pay and the writ of authority to wield magic items, of course. The Knights also have something to offer information-wise, but unfortunately, I’m not 100% sure what – part of the read-aloud text is an unreadable white on the parchment-like background and partially obfuscated by the artwork to boot. Generally, the knights offer less payment, though acting as double agents for either them or the Brotherhood may be possible. Anyway, the trail leads towards the Trans-Tethyan Trading Company – who may make for the third potential recipient of the contraband sword – fooling him is a hard task, but not impossible, and switching allegiances are more than possible.

Generally, Larke needs the missing contraband swords back – and is willing to pay more than handsomely for them: He is obviously interested in acting against House Hathisnal and needs the PCs to track Sallust’s thieves, find out who they’re working for  and find and retrive the swords – which may of course also include the one the PCs may have handed over to the Knights or the Brotehrhood, though such a retrieval is up for the DM to devise. Larke sends the PCs off towards Asellina’s tavern to gather information, where Askelos, a retired freelance rogue offers the PCs the location of the hide-out of Sallust’s thieves – if they do him a favor: Retrieve a ring he has lifted off another man and had to dump in the sewers from the dangerous underground of Tarina. Unfortunately for the PCs, the adventure railroads them into a confrontation with watchmen just as they go down the sewers – a pity no proper perception/social skill-resolutions are provided here. In the sewers, the PCs have to defeat a covetous fleshwarped giant dire rat and then return the ring.

With the location of the safe house finally known, the PCs can set off towards the safe-house, where they may actually shadow the thieves. This shadowing of adversaries is superbly detailed, with several sample locales (that include read-aloud text) as well as DCs regarding different situations in which the PC can succeed or fail. – finally, via different observations of the illicit affairs, the PCs ought to find out the name of Larios and an impending meeting, but not where it takes place. Larke definitely warns the PCs – and that has a reason. Whether they get caught by Sallust’s counter-ambush or track the leader of the gang, they may actually follow Larios to his domus – or be brought there as branded, naked hostages. Either way, they’ve arrived at their destination. Escaping/infiltrating the villa, the PCs will have to retrieve Larios’ ledger. On their way back to Larke, the PCs may or may not be contacted by a member of the Black Hand, the global crime syndicate. Whether or not that encounter happens, the ledger reveals to Larke that some of his men had been double-agents for Larios – and these traitors may be the key to finding the missing swords.

From here on, it’s investigation par excellence – the PCs will have quite some legwork to do – in 3 (!!!) pages clues and locales await neatly organized, the tender capabilities of DMs and players alike, becoming surprisingly free-form – awesome! Seriously, I really loved this particular section of the module! Finally, the PCs should get a lead: Halthre, one of the traitors, points the PCs towards the dætholayn highway and ancient ruins there. In the wilderness, carnivorous birds attack and finally, in the ruined village, a barricaded house is besieged by wandering automachonoi, undead of Sæmyyr. There, the PCs can retrieve the missing swords and conclude the adventure. The pdf also includes a glossary and 5 pregens, strangely labeled “Non-Player Characters” and bestiary-entries of the new creatures that feature glorious full-color artworks.

Editing and formatting are very good – though two artworks partially make text illegible. Layout adheres to a drop-dead gorgeous 2-column full color standard with stellar artworks to boot and should be considered superb indeed – as weird glitches, though, several letters in different sizes of the font are not properly displayed by any of my pdf-readers, showing only up as boxes with “x”s inside – jarring in an otherwise so professional product regarding the production values. The pdf also lacks bookmarks, yet another utterly baffling oversight that decreases the ease of using this pdf unduly.

“The Gates of Tarina” by Jaye Sonia and Ben Cacchione and world-builder Chris Merwin breathes the cool Greco-Roman, realistic flair of Sæmyyr to an extent that is a joy to read – atmosphere-wise, this is a superb module indeed and both writing and options galore make this, content-wise, one awesome experience backed by top-notch production values. Or it would be, were it not for glitches that make this look like a very far-advanced beta: At one point, you’re enjoying the artworks, story, superb maps – and then partially obscured text kicks you in the shins. Here you are, thoroughly immersed in the world, when a glitch in the font makes the word you’ve been reading illegible. Never to the extent that you lose track of what’s going on, but it still proves to be a major nuisance, especially when combined with the at this length inexcusable lack of bookmarks. This is one of those modules I hate to review since it’s one glorious low-level investigation, one awesome intrigue-laden first foray into Sæmyyr, one that makes me WANT the Guidebook (which is 2+ years overdue by now) and the Campaign Setting – this world is awesome. But on the same page, it makes me gnash my teeth at simple mistakes that even cursory glances at the finished files should have caught. Add to that the fact that it is not particularly long, and the pdf seems a tad bit less impressive than before. Still, we get a superb adventure – one marred in thoroughly annoying, avoidable glitches. this could easily have been, still could, in fact, be a 5 star+seal of approval pdf, but as it stands, its glitches mar it to the point, where my only recourse is to rate this at 3.5 star, rounded up to 4 since I can’t bring myself to rate this down to 3 – “The Gates of Tarina” is too good for that.