Shadowfall: Guide to the Umbral Kobolds 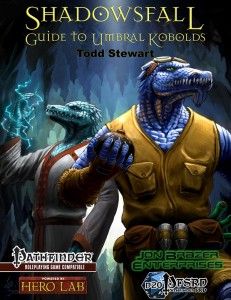 This pdf kicks off with an introduction of how Dale McCoy Jr., head of Jon Brazer Enterprises, was dissatisfied with the standard race of kobolds and an introduction of what this race is – essentially, a kobold-race ramped up to be on par with PC-races without using the identity of being koboldish. We also get a short rundown on Shadowsfall, the plane-of-shadows-setting of JBE before we delve into an actually very well-written piece of in-character prose. The short story gets you just in the right mindset before you get to take a peek at the mechanical traits of this race.

Umbral Kobolds get -2 to Str, +2 to Dex and Int, are small, get darkvision, +1 natural armor bonus, 2 to Craft (Trapmaking), Perception and Profession (miner). Stealth and Craft (Trapmaking) are always class skills for umbral kobolds. They also get light sensitivity, extensive pieces of information regarding their relationships with other races, alignment and adventuring etc. as well as thankfully a table for age, height and weight including starting age. They also come with 4 alternate racial options that may replace light sensitivity with albinism (weird choice, since albinism makes one not particularly appreciate bright lights either…), give them a blinding spit attack 1/day, make them especially tied to the plane of shadows (for increased caster levels in the dark, but also heavy drawbacks upon confrontation with bright lights and finally, kobolds that replace their natural armor bonus with +1 to Dex and +2 to stealth. With the exception of the albinism-trait’s minor fluff/crunch-disjunction’s exception nothing to complain about here.

2 racial character traits are also provided, one that nets you Knowledge (Planes) as a class skill and +2 on it and the other that gives you +1 to ref and initiative. After that, we’re introduced to two new archetypes, with the shadowsneak getting bonuses to racial bonuses to movement and as well 1/2 rogue level to craft (traps) and Perception to discover traps. Solid, I guess, but nothing too special. The Mad Bomber alchemist archetype gets 10 + 3/4 level +Int to determine bomb-DCs, doesn’t provoke AoOs when using bombs and counts as +2 levels with regards to alchemist discoveries related to bombs. Solid.

After that, we’re introduced 4 new feats, with one allowing you to mitigate some issues related to 1s on disable device checks and gunslinger misfires, one that allows bonuses for saving throws for each kobold in range, one that doubles miss chance in dim light to 40% and one that allows you 1+Cha-bonus shadow jumps per day.

Two new items are also included, with a new nauseating, blinding poison being one and the other being a dye to color scales. 32 full-blown racial kobold gods are also here and after their well-written write-ups, we get 3 new spells – one that creates an illusory double you can blow up, assault foes with shadow-illusion coins and one to create an aura of darkness for which a swarm of shadowy kobolds panics foes. Among the new magic items, we get an incantation that makes shooting into melee versus undead easier, a crown that nets +2 to Int and Cha as well as form of the dragon I, black dust that sends the undead running from recollections of their past life and a kitchy talisman that guards you with minor bonuses versus specific types of death.

The pdf closes with 3 sample communities in neat write-ups (though sans settlement statblcoks) that can be considered well-written indeed. the final piece of crunch is a CR 11 shadowsneak umbral kobold.

Conclusion:
Editing and formatting are top-notch, I didn’t notice any glitches. Layout adheres to a parchment-background 2-column standard and the original pieces of full-color artworks are nice and tie neatly the content together. The pdf is fully bookmarked for your convenience. As per the writing of this review, the herolab-files for this has not yet been released, but will be soon. The pdf comes with extensive hyperlinks to d20pfsrd.com for your convenience.

This is essentially a nice little racial pdf that makes kobolds a nice, viable alternative to making to kobolds a better PC-race choice. The fluff is great and the crunch remains balanced, nice and I didn’t encounter any particular piece of content I’d consider problematic. While neither the spells or items completely blew me away, overall, this can be considered a nice offering at a fair price and thanks to the great fluff, I’ll settle for a final verdict of 4.5 stars, rounded up to 5 for the purpose of this platform.

Check it out either here on OBS or here on d20pfsrd.com’s shop!