EZG reviews Search for Lost legacy I – By Silver’s Light

Search for Lost Legacy I – By Silver’s Light 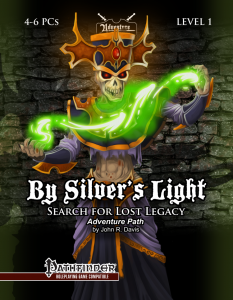 The first installment of the “Search for Lost Legacy”-adventure arc is 54 pages long, 1 page front cover, 1 page module-checklist,1 page editorial/ToC, 2 pages advertisement and 1 page SRD, leaving us with 48 pages of content, so let’s take a look!

All right, still here? The pdf kicks off with an interesting beginning – the PCs stumble across an overturned wagon and three zombies – what has happened here? The silver ore the wagon transported is still here- as is thankfully a delivery address – depending on the hook you use. The trail leads the PCs to the small hamlet of Krisen – a town divided along the sides of two factions – the dwarven miners and the human settlers. While the silver mine is closed right now due to some undisclosed issues and the extremely conservative and anti-progress/change druidic faith practiced here by the humans also has seen some problems – though their secret will be revealed in a future installment of the series. Life in the hamlet is described in lavish detail, with various fluffy encounters invoking a pastoral idyllic scenery suffused by slight tensions. Speaking of detail – the short investigation in the beginning can easily go sandboxy and the local politics, simple as they are, make for a well-written backdrop.

Investigating the wilderness will show evidence of bandits – which are dead by now, fallen victim to a roaming axebeak – a bandit’s diary showing a growing distrust of one Tanrik – perhaps he is the mysterious “scholarly” stranger that passed the village before the recent troubles began? He has been seen sneaking around the mine, so hopefully, the PCs will sooner or later, prompted by a variety of hooks, to explore the mine – and in it, they’ll realize that a part of an ancient complex have been unearthed –  and at first, both a ghouls and monstrous centipedes and cockroaches do not for an inhabited impression make – neither does a neat, lethal and creepy haunt. The atmosphere is one of creepy desolation, with crawling hands and harmonic mephits dwelling in these halls  -though these latter can be bargained with and may actually tell the PCs about one master of illusion and shadow, a man named Vargon. Said mephits also may tell the PCs about one interesting fact: Beyond the slave quarters they’ve been exploring, a couple of different chambers herein is devoted to the testing of potential apprentices – neat that the PCs may actually glean parts of the back story this way. Speaking of social interaction – they may also question an imp – though he clamors for some blood for his feeding bowl. Oh, and getting the caged imp visible is possible via chalk – though he will want to be washed as well.

Beyond these encounters, we also get a simple puzzle box to solve, battle frost skeletons and animated ropes and a wooden hangman mannequin. Having passed this test, the PCs encounter a magic mouth of Vargon – and have their way out arcane locked behind them. Foreshadowing is also imminent, as apprentices of  Vargon had their rooms here – and no, they are not necessarily dead and gone – but a confrontation will have to wait for further modules in the series. As an interesting  hook for the future modules in the series, we conclude the module with the PCs meeting a driven gillman oracle and his retinue, on route on a divine mission towards the lower levels in search for Vargon’s magnificent water and so-called “teardrops” – what these are, he doesn’t know – but the lower levels are looming and so this module ends with a tbc and more dungeoneering to be done.

We also get player-friendly versions of the two neat maps of the complex.

Editing and formatting are good, though not perfect – I noticed a couple of minor glitches regarding punctuation etc. – nothing grievous, though. Layout adheres to a nice two column full color standard and the pdf comes with a second, more printer-friendly version. The pdf comes fully bookmarked for your convenience in both versions.

Author John R. Davis has crafted a neat level 1 dungeon-module here, one that as far as I could understand from having only read the first in the series, is logically concise. The dungeon is suffused by a sense of antiquity somewhat akin to Baldur’s Gate II’s intro in Irernicus’ lab with a lower PC-level in mind. The creatures, traps and hints found herein adhere to a level of detail I really enjoyed and writing/atmosphere-wise, this indeed is a very good module – I’ve read a lot of first level dungeon crawls that fail to evoke this sense of cohesion.

That being said, this module is also not perfect: Mostly because it is simply very easy – when e.g. compared to Dread Saeceroth, the difference is rather startling: While not in any way banal, overall, I know that my players would have waltzed through this module. Whether that’s good or bad for you depends on personal preference. What is a tad bit more  an issue is that you definitely SHOULD get the other modules as they are released – as written, you sometimes have a bit of a hard time gleaning what exactly has happened/is happening now in the complex – a more concise introduction that gives you an outline of what has happened and when it happened would have helped this module. When did the gillmen enter the complex, for example? It’s a minor thing, really, and not one that detracts too much from the module’s appeal, but in the end, it is enough for me to slightly rate down this module. My final verdict will hence clock in at 4.5 stars, rounded down to 4 for the purposes of this platform.

You can get this neat first-level module here on OBS!