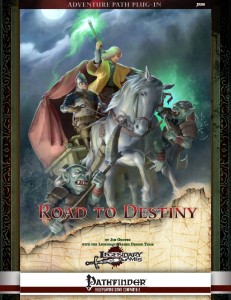 This plug-in module for the Jade regent AP is 35 pages long, 1 page front cover, 1 page editorial/SRD, 1 page advertisement, leaving us with 32 pages of content, so let’s take a look!

All right, still here? If you’re like me, you enjoyed the initial set-up of Jade Regent – and then were stumped how the first miles from location to location just…provided nothing. No adventuring at all. No threats. Well, here’s the cincher – “Road to Destiny” is all about fixing this gross oversight and provide some fodder for the PCs to whet their blades against – and essentially, the module also takes the caravan per se into account, offering some rather intriguing observations on CRs and party and how caravans feature into the combats, offering caravan combat fight information handily collated here in addition to the more classic, PC-focused combat. Where the module truly deserves some laurels, though, is in the advice given on how handling one of the two relatively incompatible ways of combat resolution (i.e. regular combat) spilling over into caravan combat  -two thumbs up for going the extra mile there. But enough of setting the scene, let’s get into it, shall we?

The first challenge the caravan will see on its way would be a rather ingenious (well, at least for that type of adversary…) ambush by the whistlewick goblins, lavishly mapped in a gorgeous one-page spread of the caravan in wooden terrain – awesome to see maps of this quality to supplement a module, even though this particular map sports annoying letters on it, denoting the position of the adversaries – an additional, player-friendly version would have been neat to have indeed.

Around Galduria, the next encounter awaits – a gnome has pilfered a rare spellbook that PCs may reacquire – for the thief ingratiates himself within the caravan with a detective hot on his heels. Once again, we get a glorious map and the way to handle the whole affair sans spilling blood deserves as much applause as the amount of details provided for the spellbook.

Now the next stop on the road (and issue) will be Wolvington and it is here that author Jim Groves has a rather cool idea – the trading post Wolvington was once almost wiped out by a plague and ever since, a gem, which supposedly can identify carriers of the disease, glows when those infected try to pass the town. All of that does a man named Hortus impart on the PCs – and he also mentions that the sheriff of the town is a greedy man, able to make the stone glow at will. His suggestion of a business proposal is simple – get the plague stone so he and his kin may look after the town without a tyrannical mini-despot in control – a nice little mini-heist, again, lavishly mapped and a cool sandboxy diversion.

In Gnarlwood, an (again, lavishly mapped) bandit ambush awaits the PCs (seeking to escape with a certain lady the PCs ought to look after…) before they finally reach the city appropriately called “Safe Haven” (in contrast to the not so safe one may know from the third AP…) – there, the PCs may reclaim either the abducted empress to be or witness, as a foreshadowing, the dhampir ulfen villain Ranulfr, the module’s primary villain – who, in contrast to lesser modules, is in genuine risk here in yet another encounter with a great piece of cartography. Killing him is a distinct possibility and one the module does not fail to address – no DM-fiat required.

After an encounter with ogres, the dhampir viking (or his reskinned lieutenant) will catch up with the PCs in one challenging final encounter that pits the destiny of Ranulfr versus the one of the destined empress – and only one shall remain. Suffice to say, both encounters get lavish full color maps.

Editing and formatting are top-notch, I didn’t notice any glitches. Layout adheres to Legendary Games’ beautiful 2-column full color standard and the pdf comes with a second, more printer-friendly version for your convenience. Both versions come with extensive bookmarks. The original pieces of full-color artworks are glorious, as are the lavishly detailed maps – especially the sheer amount of the latter makes for a VERY compelling reason to check out this module. The only negative thing I can say about the production values of this module would be the fact that no player-friendly versions of the maps are provided – sans NPCs and annoying numbers, the amount of maps would on their own suffice for a compelling reason to purchase this – as provided, they are useful for the module, but only to an extent beyond its confines.

Now this module is very much an overland trek module that needs to adhere to the tight confines of the Jade Regent AP, which is both a blessing and a curse – on the one hand, it allows for a very easy insertion in the AP and going beyond what would be required, actually helps with some of the rough edges that result from the caravan mechanics. On the other hand, it also means that it provides encounters for the road – story-telling wise, there’s not too much going on here. While the encounters per se are iconic to say the least and versatile in the challenges they pose, there is one thing I honestly wished the module had done – establish the primary villain earlier – and make the PCs run/research/encounter his deeds – building him up as a more central narrative. Road of Destiny’s one shortcoming is mirrored by the AP it supplements – the fact that the overarching storyline that ties the journey together is not the strongest of yarns.

By adding e.g. a means of regeneration/easier escape, by tying the respective stations along the way more tightly, this VERY GOOD (and that needs to be emphasized) module could have been even better. I’m not suggesting railroading the villain out of danger, but establishing more fluffy evidence of his deeds, foreshadowing him – and potentially allowing for a way for the PCs to properly unearth his reputation and background information in a more organic way. Now don’t get me wrong  -I’m nitpicking at a VERY high level here – author Jim Groves already does quite a gutsy thing in this module – but with some minor tweaks, this could have been further extended to weave a storyline into Jade Regent that completely offsets one of its flaws – a chance this otherwise great collection of encounters misses. Jade Regent DMs should definitely not let this module slip by, though personally, I’d suggest more foreshadowing and, depending on your group’s inclination, even a limited amount of rejuvenations for the villain to drive the fear he instills and tenacity home. My final verdict, in spite of these nitpicky complaints, will reflect author Jim Groves’ neat offering’s qualities and the amount of glorious maps at a solid 4.5 star-recommendation, rounded up to 5 for the purpose of this platform.

You can get this neat module here on OBS and here on d20pfsrd.com’s shop!