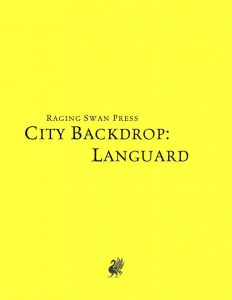 The system neutral version does come with all the adjustments you’d expect: While a wizard’s guild is present in the city, the class is properly called magic-user when referenced, DCs have been purged, class-references cleaned up (for the most part – I noticed three instances of “rogue” being referenced instead of “thief.”) and the market place section has been adjusted as well: The magic items available are btw. expensive and suitable for an old-school game. I totally buy that these could be for sale.

Creighton Broadhurst succeeds at a rather impressive task: To provide an overview of a massive city in just a few pages, to depict the complexities of daily life and the differences in tone and character of the different quarters; you will not confuse any of those locations with one another, and the pdf contains enough hooks, dressing and ideas to make Languard come to life…and best of all, there is actually a whole series devoted to going into depth regarding the individual sections of the city. Guess what I’ll be covering next? 😉 Anyhow, this supplement succeeds in presenting an overview of a city that breathes old-school vibes, that feels positively medieval. Languard sports this gritty, Greyhawk-ish vibe I enjoy; the same atmosphere that you got from the grimy cities depicted in the Witcher novels. All in all, the system neutral version is an awesome city supplement that loses nothing of its charm, well worth a final verdict of 5 stars + seal of approval.

You can get the system-neutral version of Languard here on OBS!