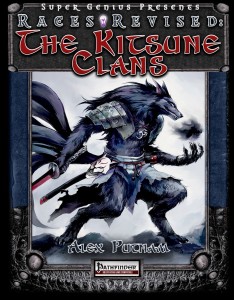 The Kitsune-race, like many ARG-races, at least to me lacked what makes a race work – a distinct culture – and hence we kick this pdf off with a massive introduction that features several possible origin myths before we delve into 4 subtypes of Kitsune:  Zenko are the ARG-kitsune, whereas Tenko are shrine guardians and Yako are the clanless kitsune. Finally, there are the Nogitsune, kitsune with a malevolent, oni-like streak – essentially the vile, black sheep among the fox clans. (Sorry for the bad pun…). Physical characteristics, relations with other races etc. are provided as well – as is an extremely useful sidebox that allows you to reflavor Kitsune for european-style fantasy by tying them to e.g. the legends of Reynard (or Reinecke Fuchs, for Germanic audiences) – by the way: Not at all a nice collection of children’s fables, but rather quite grim and dark – definitely a recommended read, though not for the faint of heart. Reynard does some pretty despicable things…

6 general personality-dispositions are explained and give ideas for players and DMs alike to properly portray Kitsune as a valid player race with its own identity before we get into a MASSIVE Kitsune name-lists with suffixes and their meaning explained – two thumbs up for that level of detail!

Next up would be the racial traits of Zenko: Zenko get +2 to Dex and Cha, kitsune-subtype, low-light vision, change shape to one form, +2 to acrobatics, +1 DC for their enchantment-spells, 3/day  dancing lights if Cha>10 and a bite of 1d4. Balanced – nothing to complain here!

Tenko get +2 Wis, +2 CHa, -2 Str, are kitsune, get low-light vision, can turn into astral foxes,, 1/day reroll Bluff or Diplomacy and take the better result, +1 to saves versus divination magic, 3/day  dancing lights if Cha>10, 2 claws for 1d4 each. Again, nothing to complain here! It should be noted that thankfully, age, height and weight-tables have not be forgotten – nor have alternate racial traits:

A total of 5 options allow you to get agathion magic for kitsune magic (i.e. +1 effective paladin level for lay on hands, Cha>10 1/day cure light wounds), be a outsider and darkvision, change shape faster,  impose a -2 penalty to resist your wiles when having won a foe over, 1/day reroll sense motive, proficiency with a light weapon and only 1/day dancing lights if Cha >10. Nothing to complain about these either.

Racial subtypes like the Kiko spirit foxes can be made with these and a Yako (wild fox) instead of Cha gets the bonus to Int. After that, we get a massive array of favored class options for all Paizo-classes – as well as SGG’s archon, armiger, death knight, death mage, Dragonrider, Godling (Adept, Clever, Eldritch, Mighty),  Hellion, Magister, Riven Mage, Mosaic Mage, Shadow Assassin, Shaman, Templar, Time Thief, Time Warden, Vanguard, War Master and Witch Hunter – awesome!

Next up would be racial archetypes, starting with the Arsonist, a type of alchemist  that is an expert and precise master of the flame and precise bombing. Youko Barbarians turn into massive fox-beasts instead of regular raging and are particularly deadly versus spirits. Spirit Envoys are oracles that can read the interwoven threads of life and thus better influence some creatures, sense enchantments and bewitchments and hamper compulsion effect’s efficiency. Finally, the Kitsune Trickster (rogue, if you haven’t guessed it) may use Int for social skills that use disguise, diplomacy, sense motive and bluff and charm person 1/day. We also get 3 new rogue talents – One that allows you to insinuate that a person you don’t know actually is your friend, one to interdict stories and usurp their content and one that may destroy thus reputations. We also get a kitsune sorceror bloodline – with iconic fox fire, keen senses, make your weapon count as silver or cold iron and later shadow walk and finally become ageless.

Next up are 8 new feats:

-Accent Mastery: Determine where one is from – uncommon and cool!

-Magical Tail: Disguise self, charm person, misdirection, invisibility, suggestion, displacement, confusion, dominate person -Gain Disguise Self as a 2/day as a spell-like ability. Every additional time you take the feat, you get the next Spell-like ability in the order 2/day. Interesting design choice – and one that imho works.

-Nogitsune’s Palate: Eat livers of killed animals to heal/gain temporary hitpoints up to 2 hp per level and +1 to will-saves.

-Realistic Likeness:  Take the form of individuals via racial shape change at +10 to disguise.

-3-Tailed Oath: Grow a second tail (and more over the levels) and gain a tail pool – the number of points being equal to your tails. You may spend these points to get + tail-number luck bonus to skill-checks, + dex-mod to damage with light, thrown or ranged weapons that require an atk-roll or +1/2 tails-number as bonus to one ref-save. This being a vow, it has a drawback – You MUST adhere to the letter of contracts and promises made or lose all benefits.

-6-Tailed Oath:  More tails, more options: Use tail pool points as substitute charges for wands, make a weapon flaming for 1 minute or reroll a concentration-check – these all take multiple tail points, btw. As drawbacks, your tama now is required for casting as if it was a bonded object, may not initiate violence versus humans and must make a will-save to defend against melee attacks from them and get a more significant penalty versus canines and cannot pass them when they guard a door, portal or gate.

-9-Tailed Destiny: Now you may recharge charges of staves, force foes to reroll attacks at -2 luck penalty or 1/day spend all points to gain resiliency and 3 hp per tail-point spent. Furthermore, you age categories are changed, making you extremely long-lived. To offset these benefits, you may fail casting even cantrips/orisons sans tama, must use non-damaging spells or indirect means to harm humans and are automatically shaken when within 30 ft. of a canine.

After these rather innovative feats, we get some items to round out this installment – Whispering Maple Leaves may add+1 to the DC of figments and glamers, whereas Kitsune Star Gems (also known as Tama) act as pearls of power for spent spell-like abilities, and shed light and are required for the oath-feats. The final item would be Steel Flames Dancing – a +1 flaming/+1 limning METEOR HAMMER (Hell yeah!) – rather cool, envisioning battles with the weapon…

Editing and formatting are top-notch, I didn’t notice any significant glitches. Layout adheres to SGG’s 3-column full-color landscape-presentation and the full color artworks featured are universally fitting and neat. The pdf comes fully bookmarked for your convenience.

Relative newcomer Alex Putnam has  created a rather cool supplement here – drawing from mythology without just chewing the tired old tropes, we actually get thoroughly balanced, well-crafted options – neither that, nor the cool crunchy ideas are this pdf’s crowning achievement, though:

The culture nomenclature etc., deeply steeped in mythology, should ensure that these Kitsune are not only a tempting option for those inclined to play anthromorphs in the first place, but actually makes the race stand out and have both fluffy and crunchy peculiarities that are all but guaranteed to make many a player contemplate playing a Kitsune – a thoroughly well-crafted supplement and well-worth 5 stars + seal of approval. And if you followed my reviews, you know how high my standards for races are and that I rarely give any racial supplement such high accolades…

Join the fox-spirits here on OBS or here on d20pfsrd.com’s shop!