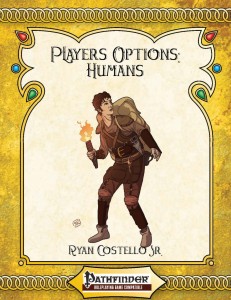 This pdf kicks off with two new variants of the basic human racial traits, with the first one being Adopted Humans, who get +2 to an attribute their adopted parent race doesn’t get the bonus to, count as both humans and their adopted race, get weapon familiarity with weapons of the adopting race, a bonus feat and an extra skill pint per level. Solid and useful if you want to go beyond background traits to customize an adopted human, but nothing too special. More distinct would be the Wild Child, who gets +2 to a physical attribute score, +2 to Wis and -2 to Int, count as humans, gte +2 to AC in their home terrain, climb or swim speed 30 ft., low light vision, scent and need to learn speaking languages. Both come with starting age, height and weight tables. If you can’t see the problem by no – the Wild Child is a good idea, but utterly, completely op. A non-standard movement speed, on par with regular movement, scent and low light vision for the ridiculous payoff of needing to spend some skill points in languages? Come on! Designer Ryan Costello Jr. can and has done better than this not even remotely balanced design-failure.

Next up are 13 new feats for humans – and they are unfortunately of a varying degree of quality. Take “afficionado“: Get +1 to all knowledge skills that are class skills for you. Would ANYONE spend a feat for these exceedingly LAME benefits? “Always Prepared” also falls into this category – as a reaction to sundering/disarming, you may make a 5-foot step, draw a weapon and make an AoO. While the AoO looks nice in theory, this feat has two feats prerequisites and its use is predicated on you having your weapon sundered or disarmed, something that usually doesn’t happen all that often. Rather specific in its benefits for the investment of a feat. If the wild child is not yet broken enough for you, you may get a bite attack at 1d6+1/2 str. “Hide in crowds” and “crowd assassin” are two interesting ideas – they allow you to hide in plain sight when there are more humans than your HD around and even make sniping attacks from crowds and vanish back into them – these are actually good concepts with a worthwhile execution.

Determined Student increases the maximum ranks in class skills to your level +1, which is ok, I guess. “Flexible Training” is something usually houseruled in most campaigns I know, as it allows you to retrain feats that are not required as prerequisites, one per even level. Not really sold on this – while design-wise solid, I maintain that houseruling this depending on your player’s foresight/experience might be the more prudent thing to do. There also is a feat that cuts your required sleep down to 4 hours – a feat I guess I have irl and generally a nice idea. Adopted humans may take a feat to better pass for their adopted parent race. “Passing Interest” is also interesting – it nets you 2 ranks of skills you can reassign via 1 hour of study on a daily basis. Great idea, though I wished it would scale with levels – as written, it’s incredibly useful at low levels and later loses almost all relevance. Another feat nets you the benefits of versatile weapon training as a swift action – the basic feat (Versatile Training) allowing you to use a move action to get +1 to atk, +2 to damage or +1 shield bonus AC for one turn. Solid, since it trades action economy for increased flexibility. Finally, there’s a feat that nets you +2 to diplomacy and allows you to increase the initial attitude by up to 3 steps.
After that, we are introduced to new flaws (introduced in the rather neat Player’s Options: Flaws – which I encourage you to check out here!) and the pdf features all necessary pieces of information to introduce flaws into your campaign – a total of 8 new flaws are presented and they are universally neat and offer some nice options. Two thumbs up for this part of the pdf!

Editing and formatting are very good, I didn’t notice any significant glitches. Layout adheres to 4WFG’s printer-friendly b/w 2-column-standard and the pdf comes fully bookmarked. The pdf has no artworks but doesn’t need any at this length and the front cover is a separate jpg.-file.

Humans are hard to write for, as they are the default race and usually what one sees as the norm against which we judge the other fantasy races – even more so in the context of a rules-supplement such as this that has the additional handicap of not being able to make rules based on campaign-specific cultural peculiarities. That being said, the pdf has me rather neat ideas in its pages, though it is far from perfect – the wild child is every definition of the word “broken” and the vast majority of feats is very specific or simply underwhelming. The crowd-related feats are interesting, yes, and I like the design rationale for the Versatile Training Feats, but most of the other feats did not seem like valid choices to me. The flaws and equipment, then again, are cool and well-written and provide some nice options for the race of humans. Whether that’s enough to carry the product, though, largely depends on whether you like the concept of flaws or not. If you do, then this pdf has something to offer you and might offer some nice options. If you don’t, then this loses quite some of its appeal.
However, this is no pdf that can blindly be introduced to your table and also features some components that are simply not balanced with existing options. Since the price is low and this pdf still has something to offer, I’ll settle for a final verdict of 2.5 stars, rounded up to 3 for the purpose of this platform.

If you want to take a look at this, click here!