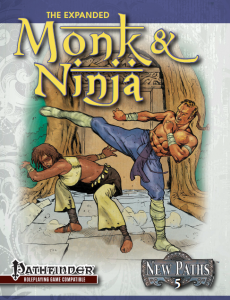 After one page of cover art sans fonts (nice if you need a hand-out!) and further reading advice, we delve right into the new content for monks:

–Beast-Soul Monks gain animal companions at the cost of flurry of blows and stunning fist and may transform into an animal as appropriate for their style – i.e. a crane-style monk would get a bird as an animal companion and could learn transforming into an animal – usually in an analogue to the beast shape spells and with the exception of the mantis-style, which would work as per vermin shape.

–Clockwork Monk: Now if the name wasn’t an indicator – this particular archetype is tied to Midgard’s Gearforged race of sentient constructs and thus comes with some uncommon design-choices – for example the fact that instead of still mind, they get bonus hp and that they actually are proficient in armors etc. They can also choose a utility, which is included in their rebirth as clockwork beings – and ties said mechanic to some class benefits, making this a true racial archetype, not just one that had a race slapped on. The capstone transformation into an inevitable lacks bold letters for its name, though – a minor formatting glitch.

–Monks of the Compliant Rod Style are masters of combat with quarterstaffs and Bo-Staffs and may enhance the damage the deal via ki to progressively make their weapons count as bigger sizes regarding the damage dice.

–Monks for the Glorious Endeavour get only ONE weapon proficiency which may be exotic, but can’t be changed. When wielding anything but this weapon, the monk gets severely impeded and unarmored strikes don’t get as fast a progression. As an upside for these detriments, these monks may call their weapons to their hand by spending ki, get some bonus feats and may e.g. mix weapon and unarmed attacks in their flurries. Their chosen weapon also becomes more resilient in their hands and starting at 9th level, they can actually use unarmed strike feats in conjunction with their weapon. Beyond these levels, the monks may spend Ki to ignore set amounts of DR. As a disturbing nod for DMs, the Darkhul Hunger Monks are mentioned – and their idea is rather cool, though the entry is missing a blank space, combining two archetypes that modify the same class features.

-One of these being the hungry ghost, the other being the Monk of the Peerless Mountain archetype, who gets a different array of monk feats and is particularly adept at cleaving foes via kicks, not incurring the usual -2 penalty to AC and have abilities centered mostly on cleave – whether more movement, ki-powered rerolls or not even requiring the foes to be cleaved being adjacent thanks to ki.

-Inspired from my favorite Drake from the Book of Drakes, the Paper Drake Monks get DR versus bludgeoning, may reduce or enlarge themselves and may spend later 4 ki to turn into A SWARM OF PAPER CRANES. Yes. You read right. And while said swarm-form is only based on the bat swarm when an original one would have imho been cooler, the idea is AWESOME.

-The final new monk archetype would be the Six talismans Monk, who may imbue his ki in paper talismans for devastating effects – and I’d commend it. If only I wouldn’t vastly prefer Rite Publishing’s more complex Sutra Magic from Heroes of the Jade Oath. So yeah, nothing wrong here, I just prefer a more complex and less class-tied system.

So that’s it for monks – what about Ninjas? Well, they first get 4 new master tricks -gaining elemental fist, elemental arcane school benefits at 1/2 level, turning to mist for 1 round powered by Ki – the latter getting a cool follow-up that allows the ninja to let him/herself be inhaled, dealing unarmed damage if the target doesn’t manage to cough up the ninja – unfortunately, the rules-language is a tad sloppy here – first of all, the ability once refers to a monk, not a ninja – which is a minor oversight. Secondly, though, and more grievous – what happens if a ninja gets partially inhaled and runs out of ki? Can the target still attack the ninja? What about casters, do they still have line of sight versus wisps of ninja-gas? The ability is so cool, but fails to specify too much to be of any use.

After that, we get a new archetype, the elemental ninja, who gets an elemental arcane school in place of ninja tricks gained at 4th, 8th, 12th etc. levels and poison use. Okay, I guess, but not too exciting. The second archetype is the Mist Stalker, who replaces poison sue with the Shadow Strike feat and may detract concealment granted by clouds etc. – to the point where they get a limited blindsense in them while having at least one point of ki. Also okay, if a bit specific for my tastes.

After these, we delve into the section on new feats and unsurprisingly, we get a lot of new styles: Broken Mirror, Death Butterfly, Desert Scorpion, Eagle and Nightwave Style – though the feats aren’t limited to them, including e.g. a feat that allows the bo staff to be sued as a reach or double weapon, one to affect undead with your paper seals as if they were living – which is weird, for the damage-dealing aspects, holding them etc. should work – blindness/deafness wouldn’t, but still. Not sold that this works as intended. A damage upgrade for the paper talismans is nice, but imho should not be a feat and rather part of the archetype’s array of abilities, but of well – the fact that it can be taken multiple times is nice for those wishing to specialize on the talismans. Gearforged monks may deal damage while grappling by shredding foes with their gears (cool!). What should come under very close scrutiny by any DM allowing it is the Coiled Strength-feat – requiring dex 13, BAB +1 and weapon finesse, it allows the character to use dex-mod for damage rolls instead of str when using flails from the monks weapon group – the weapon-type is limiting, yes, and 2 feats are a significant investment, but I still can see potential issues arising here. Combination Finish, on the other hand, is cool – increasing the DC by +1 when using punishing kick, stunning fist or elemental fist for every preceding successful consecutive unarmed strike during that full attack. “Finish him” indeed.

Speaking of cool – using polearms as help via acrobatic fighting styles also gets a well-crafted feat-representation as does the iconic one-inch punch. While the feat’s execution is nice, it’s the second take on the mechanic I know after Little Red Goblin Games’ Heroes of the East 3: I prefer LRGG’s representation of how the attack works over this one, but this feat’s results – thus I’ll combine them in my home-game – the joys of brewing… High level monks may also take a feat to use multiple stunning strikes per round.

But back to the styles: The Broken Mirror Style requires Shadow Clones or Mirror Images – netting you an additional one that may exceed your maximum and impeding foes by being more varied, allowing you to feint better. Even cooler, when one of these images is destroyed, via the feats that build up the style, you may make an AoO versus the foe – and if you crit with another of the style’s feats, you gain additional mirror images. Uncommon and cool idea for a style

The Death Butterfly Swarm requires the use of elemental fist and deals an additional 1d6 acid damage in the round after the hit, as larvae of shadowy butterflies feast on your foe. Additionally, it allows for the use of stunning fists and elemental fists via a select array of weapons. Aforementioned damage can be extended further and deflecting projectiles can be done while armed and finally, you may spend uses of elemental fist to have your larvae hatch and erupt, dealing more damage and potentially nauseating infected foes.

The Desert Scorpion style improves your CMD versus bull rush, drag, reposition and trip at the cost of 10 ft. of your movement (or 5 ft. if you already are slower than 30 ft.) and count as one size smaller, with all the resulting modifications to AC, damage etc. The follow-up feat allows you to not take a penalty to unarmed attacks while being grappled/grappling and even allows you to fight back at -4 when pinned. The final one offsets the decreased damage from the size-modification and allows you to follow up combat maneuvers with a free trip at -4.

Eagle Style, unsurprisingly, allows you to deal slashing damage via your attacks – and is BROKEN AS ALL HELL.: Why? because it allows you to, upon performing a dirty trick, to make a foe unable to vocalize or speak instead of the usual results of the maneuver. No save, nothing -lethal versus spellcasters. Plus, it does not specify how long that works – I assume as long as e.g. a trip-condition would last etc. – but how does one end it? Moving away? CMB? Don’t know- Broken. The follow-ups allow you to follow crits with combat maneuvers and apply second dirty trick results when beating your foe’s CMD by 10 or more – nice both. If only the basic feat wasn’t broken.

The final new style is the Nightwave style, which adds wis to con-checks to avoid drowning and to swim-checks, can move unimpeded through watery terrain, deal slashing damage with unarmed attacks and take no penalty when fighting underwater. As follow-up, you may hold your breath longer, never run risk of inhaling a poison when holding breath and deal additional bleed damage versus foes that are unaware of your presence and use stealth to hide blood and bubbles underwater. The final one allows you to use elemental fist to hit all creatures adjacent to you with freezing cold, darkening additionally the water underwater and when used above water, it makes the air count as underwater for one round for various purposes – interesting design-choice there!

We also get 7 new monk weapons ,from sun and moon rings to wind and fire wheels and alos e.g. horse tail whisks, iron flutes, tamo canes – and even a farmer’s hoe!

Editing and formatting are still good, though not up to the standard we usually get to see from Kobold Press – I mentioned a couple of the minor glitches I found herein. Layout adheres to a per se beautiful two-column full-color standard that is sufficiently printer-friendly and the artworks are neat. The pdf comes fully bookmarked for your convenience.

Author Jerall Toi has created a nice array of options here – and honestly, after checking out the monk archetypes, I thought we’d be looking at a 5 or 4-star file here – while they didn’t blow me all away, I liked them well enough – but alas. Then the Ninja-section began and somehow, it feels like the pdf takes a nosedive from here – from the problematic master-trick to rather bland archetypes to feats that could have used some additional balancing, the flaws accumulated. Now don’t get me wrong – this isn’t a bad supplement by any means – but its flaws also mean it I can’t consider it for the highest honors that some cool concepts like the Nightwave or Broken Mirror Styles would warrant – hence, as much as I don’t want to, I’ll have to rate this down to 3 stars – an ok, but not by any means perfect supplement.