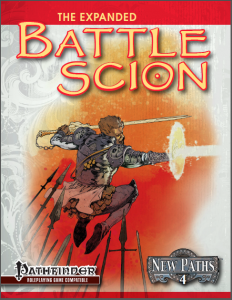 Thankfully, though, the class also gets some signature tricks to pull off – namely a deflection aura (that now also nets an additional scaling bonus to hit with force blasts) and more notably, the power to throw so-called forceblasts: Usable 3+Int times per day, these are essentially big singular magic missiles that automatically hit for 2d4 damage, scaling up to 8d4 at 19th level, making this essentially a warlock-style, force-damage slinging class. And here, the revision sets in, fixing the broken fact that force blasts were once automatic hits – they now require touch attacks – still powerful, but not overpowered. Two thumbs up!

Of course enhancing one’s weapon via an array of magical qualities as a standard action is also part of the deal and makes for melee versatility as one would expect from an arcane/fighter-class.

The pdf also comes with an archetype called Force Blaster, which enhances said blasts – for once, the archetype delivers +2 uses via a bonus feat and also allows the blaster to do unique things with the blasts: First of all, the class may use move actions instead of standard actions to fie these blasts and at higher levels, fire two of the blasts simultaneously and even fire them as swift actions at level 11 and above. Finally, the force-blaster can deliver push and trip combat maneuvers via their blasts – and while now the force blasts have been nerfed to the point where I’d allow this archetype, ranged combat maneuvers still leave a slightly sour taste in my mouth. Still, the payoff is there and I hereby renounce my complaints about the archetype.

So…is this pdf worth its asking price? It ultimately depends. The battle scion is the third prepared gish-class I’ve read and its design-goal of delivering an arcane paladin can be considered accomplished. Though whether that’s enough depends on the person you’ll ask. The magus is essentially more on the casting-side than the martial side, whereas the battle-scion is the other way round – a fighting class with an array of arcane spells. And honestly, that’s where I’m not 100% sold. To me the magus is a kind of paper-tiger – deadly, but also relatively fragile in melee, whereas the battle scion is much sturdier – and the battle scion may learn ALL spells from the sorceror/wizard-list. Only up to 4th level, granted, but still, that’s quite a bit of flexibility when compared to non-gish martial classes. The closest analogue would probably be that the magus is a razor, the battle-scion (especially the blaster!) being more of a sledge-hammer.

The Battle Scion is intended as an arcane paladin and since the force blasts still are powerful, but no longer guaranteed damage with their required touch attacks, I consider this particular mission of the class accomplished. So yeah – great job by designer Marc Radle – and worth 1.5 stars, since the class no longer breaks the game at low levels, resulting in a final verdict of 4.5 stars, rounded down to 4 for the purpose of this platform since for the 5, I feel the class could have used some unique powers akin to mercies or do something more imaginative with its aura – that’s complaining at a high level, though – this is the arcane paladin class of choice.

You can get the revised Battle Scion here on OBS!