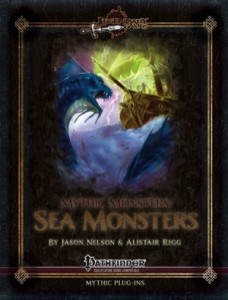 This installment of the Mythic Monsters-series clocks in at 34 pages, 1 page front cover, 1 page editorial, 1 page SRD, 1 page ToC, 3 pages of how-to-use/introduction, 2 pages of advertisement, 1 page back cover, leaving us with 24 pages of content, so let’s take a look!

As has become the tradition with this series, we kick off with a kind of supplemental content appropriate for the theme of the issue, this time in the guise of 8 feats to expand your aquatic combat options for mythic creatures (and if you need further oomph for non-mythic aquatic foes, check Alluria Publishing’s Cerulean Seas-books – they’re awesome!) -sporting the very much required swim-by-attack (both regular and mythic), faster swim speed (potentially powered by mythic power for impressive bursts), the ability to share breath with land-dwellers (now that one’s iconic!) and feats that make you count as having a running start from water to e.g. smash on foes and superior flanking options in the water make sure that these feats are actually awesome and should be considered non-optional for DMs looking for more tools for mythic aquatic foes (or players!).

But you’re here for the monsters, aren’t you? At CR 4/MR 1 Bunyips essentially get an amped up version – their roar for example can deafen foes. AT CR 15/MR 6, the Clockwork Leviathan gets a reflexive ability to temporary counter the electricity vulnerability it has via mythic power – damn cool! But that’s not all – the Legendary Games masterminds went all-out on this beauty – what about a kind of ionic reactor, including meltdown upon its destruction? Deadly grinding? Immunities conveyed by orichalcum alloys? A breathw eapon? This one is so glorious! Two thumbs up!

At CR 5/MR 2 Devilfish may emit clouds of deadly fiendishly infused blood…cool upgrade, especally considering how low level critetrs don’t have as much room to maneuver in. The CR 11/MR 4 Dragon turtle may execute AoE-bull-rushes (YEAH!!!) and a shell that may deflect rays et al – AWESOME! The CR 12/MR 5 Draugr Crew is awesome – a type of troop, these guys get ship-based spawn-making, press gang mortals and generally makes for one of the most awesome creatures I’ve seen so far in the Mythic Monsters series – not even the relic “XX Melee damage is unusually low” that was forgotten in the melee line does not in any way impede my enjoyment f this beast of a creature. This is on par in creativity with what one usually sees from Rite Publishing – and yes, I think that is a compliment.

At the lowest end of the spectrum, CR 3/MR 1 Incutilis may not just puppeteer the dead – they paralyze and animate foes as lacedon-like creatures that nonetheless aren’t undead. Now *THAT*, ladies and gentlemen, is how to make a low CR-creature feel mythic and awesome. Two thumbs up! The CR 22/MR 9 Kraken is a beast I was looking forward to – and what can I say, the beast can throw creatures from ships and even make the friggin’ sea TURN TO BLOOD. That inflicts bleed damage. Fans of the Scarred Lands – you need this! NOW!

The CR 4/MR 1 Seaweed Leshy is adept at strangling foes by turning into a kind of Sargasso-variant of assassin vines – and comes with bonus information on how to grow these guys yourself. Awesome! CR 5/MR 2 Mythic Sea Hags not only gain great hexes (by taking the Salt Wife trope -do some research on the term and e.g. the Farese Islands for great alternate origins for these beasts…) and a cursed gaze, they also are masters of their own hexed harpoons. The CR 15/MR 6 Sea Serpents get superb bursts of speed AND optional nondetection, making tehm superb hit-and-run predators and they also learn to generate deadly vortexes. Two thumbs up! (Also: Nice 1-page artwork depicting it!)

At CR 6/MR 2, the Selkie is an incredibly persuasive creature, but when compared to the other creatures herein, falls slightly short of its potential. The CR 17/MR 7 Great White Whale is intelligent and superb at smashing vessels…and call me a nerd, I don’t care – I would have loved a proper nod, ability-wise, to Moby Dick here – a curse of obsessions, a comment on the nature of wrath, something like that in the guise of an ability. And no, I won’t hold it against the pdf that it did not indulge in my need for literary allusions.

At CR 8/MR 3, the new creature herein is the Jorganth. Oh boy – first of all – the one-page artwork of this beast is one of the finest artworks I’ve seen in ages – a vast, eel-like, tentacle studded deep-sea predator aberration from the oceans of the lands of the fey. Electrical fields, capability to emit deadly beams, reflexive attacks and the ability to create will-o’-the-deep servants and feed on fear – this creature is glorious in its statblocks and the superb full-blown write-up superbly supplements one of the best creatures I’ve seen in quite a while, even within the exalted ranks of the new creatures Legendary Games provides for the Mythic Monster series. The full-blown fluff that accompanies it makes it oh so much more awesome and I stand by the claim that Paizo’s bestiaries would be so much more awesome if they all featured proper full-blown write-ups like this one does. This beast made me come up with 3 adventures while reading its entry – without trying in any way. That good.

Editing and formatting are very good – while I noticed one relic, that’s not enough to rate this down. Layout adheres to Legendary Games’ 2-column full-color standard and the pdf comes with 2 original full-page artworks, both of high quality. The pdf is hyperlinked for your convenience, but has no bookmarks, which is an unnecessary comfort-detriment in my book.

Jason Nelson and Alistair Rigg have surpassed themselves herein – the creatures are so cool, so iconic, I don’t ever want to use their non-mythic equivalents ever again. Ever since the advent of Mythic Adventures, I’ve used the rules to make bosses more challenging in my game (they tend to get killed in 2 rounds or less otherwise…) and these beings just blow my mind. The unique, cool abilities this pdf offers for so many creatures just can be considered glorious, even before the new creature, which is just the icing on the awesome cake. This installment, in spite of the lack of bookmarks, is so far the apex of the series for me and is well-worth 5 stars + seal of approval and should be considered a must-buy for anyone running aquatic adventures – this pdf is worth the asking price for ability-scavenging alone. That good. Get it.

You can get these awesome aquatic beasts here on OBS and here on d20pfsrd.com’s shop.