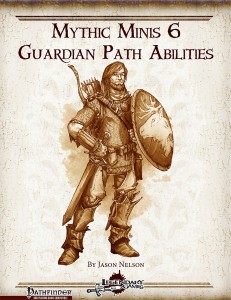 We kick these new abilities for the guardian path off with 4 new 1st tier abilities:

-Analytical Eye: When a creature has attacked you, spend one use of mythic power as an immediate action to learn about int-mod combat feats your foes may have. That’s…exceedingly boring, lame and unworthy of a mythic ability. It is also recycled from the Champion mythic mini-pdf. Reprint at that brevity?

-Flanking Foil: Get 1/2 mythic tier as dodge-bonus to AC whenever you are flanked. If a creature flanking you misses you, you get this bonus to atk on your next attack against it. So…does this mean an ally could theoretically threaten you, putting you into a kind of flanked position so you get the bonuses? If no, why not? After all, if the ally had been charmed an attacked you, but was commanded to miss, you’d get it. Being flanked usually is a passive condition you incur due to being outmaneuvered. Assigning active benefits to it is very problematic. Want a more drastic example? Take a bag of declawed kittens, handle animal them to attack the back of the heavily armed guardian – et voilà: Permanent protection from the detrimental aspects of flanking (apart from sneak attack). At mythic tier 4, the ability offsets the flanking bonus and nets you a +2 to atk as long as you have your rabid, impotent mewling bag of kittens ready. Partial failure of the kitten-test. Oh, and bad nomenclature – there is already a feat of that name, one that btw. is working better than this ability.

–Pike Chopper: When being attacked by a weapon of the spear or polearm group, you may sunder it as an AoO, sans negating the damage you may incur, though. Spend one use of mythic power to extend this benefit to all weapon-groups for 1 turn. Poor polearms – unloved and now further diminished… Kidding aside, why not make the ability more generic (choose weapon group x, sunder weapon x as AoO, spend mythic power to expand weapon groups)? Also: Does the AoO sunder attempt provoke an AoO of itself if the guardian doesn’t have Improved Sunder? I assume so, but I’m not sure and since this goes into the AoO-chain territory, I think clarification here ought not be optional…

-Terrible Courage: Get mythic tier as bonus to saves versus fear-effects and as bonus to the DCs to intimidate you. Also, essentially get evasion to fear-effects, ignoring partial effects, but also allowing you to cut the duration of effects in half, even if you fail your save. If you successfully save against a fear-effect, spend 1 use of mythic power to affect the originator of the fear-effect with its own effect, ignoring the potential immunity of non-mythic adversaries. Okay, I guess,.

We also get 5 3rd level abilities:

–Mythic Rider: Use mythic power to prevent being dismounted or having your mount fall prone. Alternatively, grant your mount hard to kill, recuperation and mythic saves for 24 hours. Solid for mounted characters. Also: Recycled from the Champion-pdf.

–Parting Shot: When killed or reduced to being helpless, unconscious etc., make one AoO for every 3 mythic tiers you have, but not more than 1 per foe. Alternatively, make a ranged attack against a foe within 30 feet if you don’t threaten any foes. Spend one use of mythic power to ignore concealment with these attacks. This happens as you go down, i.e. you still take the damage/are killed etc. Cool concept, but has its issues: Does the usual limit of AoOs still apply? I.e. only one AoO sans combat reflexes? If the user has combat reflexes, do these AoOs have to be taken from the AoOs provided by Combat reflexes or are they extra AoOs? Also, when using the ranged option and an opponent with reach can make an AoO against you, does it provoke an AoO as per “ranged weapon in melee”? If using a melee weapon as a thrown weapon, do the improvised weapon modifications to atk and damage apply? In this case, is an AoO potentially provoked? This becomes relevant if the guardian is only rendered unconscious, not killed, so yeah – clarification once again required.

-Shielded Perimeter: As a full round action, move up to your speed – all allies whose spaces you move through get 1/2 of your mythic tier to AC and to the acrobatics-DC to move through the squares. The bonus is further increased if you wield a shield- If you spend 1 point of mythic power, you also add the bonus to ref-saves and CMD of allies and makes the respective fields difficult terrain for your enemies. See, this one is AWESOME. Two thumbs up – that’s what Legendary Games ought to be about.

–That Trick Doesn’t Work on Me Anymore: After analyzing foes with analytical eye, up to 1/2 of your mythic tier combat feats of your adversary can be selected. by spending 1 use of mythic power per feat you’ve chosen, you become immune to its effects, essentially cancelling out the benefits (but not the penalties) of the combat feats of the target when used against the guardian for 24 hours. And yes, this means potentially suddenly incurring AoOs – if the target is thus surprised, you get + mythic tier to atk with your AoO. Solid, though I don’t particularly care for the metagamey aspect and analytical eye.

-Trick Rider: Another reprint from the champion – still a very boring ability.

–Healing Sink: Maximize all healing applied to you, even supernatural and extraordinary healing. Also, when adjacent to a creature that gets excessive healing via conjuration (healing) beyond its hp, you receive that left over amount. Smart -since the caveat precludes infinite healing via regenerating troll-kittens. No complaints.

-To the Last Breath: Immunity to being staggered, sickened or pain effects at or below 0 hp and do not lose hit points in this range. Essentially “To the Death”‘s big brother. Okay, though at this level probably not THAT relevant anymore – at 6th tier, Guardians will probably all-out die rather than being knocked unconscious. Still, an okay ability.

At first glance, I thought “Yay, more content” – only to realize that that would be reprints from another mythic mini. This overlap is slightly unfortunate, seeing the pdf isn’t long in the first place, but all right. Where I was rather surprised is that some of these abilities have mechanical issues, which is pretty uncommon for Legendary Games. Worse, while some are truly iconic and cool, like “Shielded Perimeter”, the majority just didn’t blow me away – either due to minor ambiguities or due to simply being not that awesome – at 6th tier, for example, To the Last Breath would require a massive bonus to the negative HP-threshold before death to make ANY character contemplate taking it – otherwise it is mostly worthless, which is a damn pity. Overall, a rather weak installment of mythic minis with some issues that weigh heavily at this length. My final verdict will hence clock in at 2 stars.