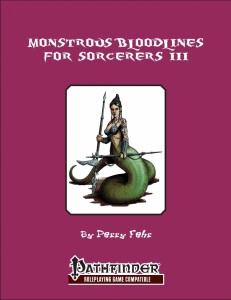 The third pdf in the series, detailing Perry Fehr’s take on monstrous bloodlines for sorcerors, is 9 pages long, 1 page front cover, 1 page editorial/ToC, 13/4 of a page SRD, leaving us with 5 ¼ pages of content, so let’s take a look!

The first of the new bloodlines would be the aranea bloodline, which offers the respective sorcerers Spiderman-style spinnerets at the wrists, a spidey-sense (roll multiple times perception-checks 3/day), poisonous touch and at high levels you can ignore the full-round metamagic casting restriction a limited amount of times per day. The capstone is slightly weak, as it allows you to turn into spider-like creatures for 1 hour per transformation until the total CR of transformed spider-creatures equals 20 or less. The problem is, that there isn’t really a monstrous category that defines spiders – are scorpions part of the deal? What about demonic retrievers? Ettercaps? I get the idea behind the capstone, but rules-wise, it unfortunately is rather ill-defined. I also would have loved a tighter wording with the web-swinging usage of the strands and what precisely can be done with them – what are their stats? As soon as you can use them as retractable cables, hp and hardness are REQUIRED. Additionally, can webbed foes be roped in? If so, via which rules? There probably should be a bonus to CMB of the maneuver, but the bloodline doesn’t deliver that. Cool ideas, partially flawed in execution.

The Asura-bloodline gets some truly powerful spells and its capstone allows the sorcerer to reshape slain foes into CR-equivalent beings to do his bidding. Resistance and DR-granting shields are neat to have and the bloodline also gets a specific force blade they can manifest and direct to attack up to50 ft. away. Unfortunately, the wording of the ability leaves me puzzled – what kind of action is conjuring up the blade? Does it have to travel to the foe to be attacked? If so, can it be intercepted by e.g. force cages? Directing it to attack foes is a move action, but does the blade gain iterative attacks? Does the sorcerer need to have line of sight or line of effect to have the blade attack its victims? None of these questions are answered by the ability’s wording, rendering it imho useless and severely hampering the bloodline’s appeal.

The Behemoth bloodline is interesting in concept, as it makes you essentially a walking doom-speaker – its capstone REQUIRING you to turn into a huge beast for a limited amount of time per day. Unfortunately, the bloodline suffers from MASSIVE wording ambiguities. Take the capstone: What if the sorcerer can’t become that big? What if he’s caught in e.g. a cell/ adventuring in the claustrophobic depths of the underdark? Does he still grow? If yes, what are the consequences? Does this involuntary growth potentially damage the sorcerer? What structure can be destroyed thus? The first ability suffers from similar issues – while cool in its idea of enabling allies to run away and enhancing their movement speed and initiative, the ability fails to specify what kind of bonus the enhanced movement is and whether it applies to all kinds of movement when applicable or only to one mode of movement – a 20 ft. burrow speed enhancement of the wild-shaped druid is a completely different matter from the said enhancement to land speed… Again, a great concept ruined by flawed execution.

The Kami bloodline also has an issue – at 3rd level it grants access to a gaze attack that staggers foes – unfortunately, the save of the ability is only rolled on the round following after that, resulting in gaze attack-blinking: Activate, auto-stagger foes, deactivate. Rinse and repeat and you can keep one foe staggered – sans save. Broken and needs revision. Another problematic ability is the level 15 ability, which lets you increase or decrease age of targets – resulting in 1 point damage to physical or mental attributes. The thing is – at this level, this is rather weak and it is not clear whether e.g. this is true aging – does it drain the years the individual still has to live? Can it be used to prolong life? How many years would be the equivalent of an ageing effect? What if the ability pushes a foe over one age-category threshold, does s/he gain the attribute modifications of an increased age category? Or is it just a fancy way of justifying attribute damage? Again, good idea, flawed execution.

The lamia bloodline nets you SR against divine spells, immunity to curses (Not a fan of that, but that won’t fracture into the verdict) and a wis-draining touch attack. Rather cool: Suggestions and charm can be added to the damage – though, to nitpick, the correct wording would not be “for free”, but as “part of the touch attack” – also, the ability should specify that this effect does not provoke AoOs. The high-level abilities are cool per se, with the capstone sporting acidic blood that damages attackers on a failed ref-save. Unfortunately, again, the wording fails – the ability is not restricted to melee attacks, meaning ranged attackers can be hit by extremely precise acidic blood spurts… 😉 Kidding aside, unfortunately, this again needs rephrasing.

The Mi-Go bloodline kicks off with an excellent idea: The sorcerer can create biotech weapons that deal 1d6+ 1 per two sorcerer levels and deal either fire, cold, electricity, acid or force damage, though you must specify which type of damage you deal when making the item. It can only be fired a limited amount of times per day. The idea is so cool, but its ramifications have not been properly thought through: If there is a physical manifestation of the weapon, can the sorcerer hand it over to allies? What about iterative attacks? Could he sell an item and keep it functional, then create a new one? Mi-Go sorcerer-scam artists? Worse yet, there is the level 9 ability which can and will WRECK the logic of your campaign world. Choose any 3 item-creation feats. Items you create via them run out of power after 3+cha-mod weeks. Worse, the items made are considered non-magical, meaning that they work in antimagic fields – and worse, that they CAN’T BE COUNTERSPELLED. Create a wand and BLOW through any mage academy as you watch the archwizards feebly fail at countering your tools. Worse, does this ability’s time-limitation mean that the items have no charges? Anyway, this can and will wreck the internal consistency of your campaign world. If multiple sorcerers work together, they could take on just about ANY lich, wizard academy etc. Hand wands and staves to those grunts and watch the opposition WEEP. Broken beyond repair.

The final new bloodline is the robot bloodline and its laser eyes lack the specification that it remains fire damage at 9th level. At 15th level, you get hp “as a construct would, 10 if small, 20 if medium, 30 if large” – what does that mean? 20 hp per level? A one-time boost? Does it work retroactively? If it does, that would mean280+first level hp+con-mod. Speaking of which: Does that one still apply? I assume so, but how does it affect these hp? If at all? Or does it mean that starting at 15th level, the sorcerer gets these hp instead of his usual hp? What if a sorcerer belongs to a size category beyond large? Again, the bloodline’s ability fails to specify necessary information.

Editing and formatting on a formal level are good, I didn’t notice any significant glitches. Layout adheres to PDG’s 2-column standard and the pdf comes bookmarked, which is nice to have.

Wow. After the rather excellent second installment of the series (my favorite bloodline-pdf so far!), I had high hopes for this one – hopes that were utterly crushed. Don’t get me wrong, author Perry Fehr has managed to pinpoint some cool concepts and uncommon design-decisions and integrate them into the respective bloodlines to make them feel unique. The ideas per se behind the rules are often excellent. But the execution is a complete, utter and absolute TRAIN-WRECK.

NONE of the bloodlines herein work as intended. NOT ONE. Concepts have been taken and worded in a way that is sloppier than my ad-hoc decisions at the gaming table, lacking necessary balancing tools (stagger gaze-exploit), information on how they were supposed to work or just take a concept that sounds “cool” without thinking through ANY of the resulting implications. From the lack of mechanics to spinneret-drag foes and web-swing correctly to the Asura’s malfunctioning blade, the Kami’s ill-defined aging touch, the Behemoth’s issues with size and fleeing, the minor lamia-issues up to the robot’s glitches up to the Mi-Go-bloodline’s potential to utterly and completely destroy your campaign setting’s internal logic, these bloodlines, unfortunately unanimously FAIL. Badly thought through, rushed and amateurish in execution, I can’t find any saving grace for this pdf – which is a damn huge shame, since the basic ideas are superb, but completely and utterly come apart due to the imprecise, sloppy mechanics. My final verdict will be 1 star.

Still want to take a peek? Here’s the OBS-link and here you can get it on d20pfsrd.com.

And here’s the link that nets you the bundle, with the superb second installment.