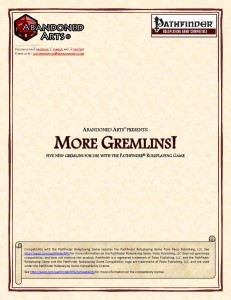 The first of the mini monster manuals by Abandoned Arts is 8 pages long, 1 page front cover, 1 page SRD, leaving us with 6 pages of new mischief-causing gremlins, so what do we get?

Well, the first critter would be the  Gobbledeguk at CR 1/2 – which comes with a short, nasty song (nice!) and two rather interesting abilities: When killing a creature by biting, these gremlins shred anything with a hardness of 8 or lesser (fearsome imagery) and they may also a grinning state: Having mouths studded with far too long teeth, grinning results in severe damage to the Gobbledeguk, causing bleed damage, but also an adrenaline release for the masochistic gremlin, resulting in increased combat prowess… The creature also comes with notes to create the dreaded 15 HD brood mothers of the race…creepy. The one thing I have as an issue versus these gremlins – they are TOO suicidal – with wis 8 and no ranks in heal, grinning is a death sentence. Not that may be the intention, but still.

Nightkin Gremlins at CR 1 had me flash back to diablo 2’s most hated world – potbellied, mask-wearing, blowgun using threats that, upon death, turn into tiny skeletons that keep attack – unless wearing masks, which are also introduced and which work for them as a gentle repose – for a time.

Shaggy Gremlins with tusks and unworldly stench, breath weapons and a morale bonus( and penalty) suppressing aura, the Osswyrd at CR 2 are made of win – as are the witchwyrd variants who additionally get access to a limited selection of spells from various witch patrons.

The hunchbacked Perstermin gremlins at CR 1 not only have shrooms growing on their back, much like an antibard, they can penalize foes with invisible nettles, thwarting their attempts to do anything really and cutting the proud down to size. Oh, and their beard can hold objects.

Wicklings at CR 1 look like a candle is growing out of their head and may disguise themselves as such. Their tongues can ignite flammable objects and extinguishing the wick of these small pyromaniacs causes them severe discomfort and power loss – nice Achilles heel!

The final page provides the statblock for aforementioned nightling skeletons as well as a list of monsters by monster roles and one that organizes them by CR.

Editing and formatting are top-notch, I didn’t notice any significant glitches. Layout adheres to Abandoned Art’s 2-column no-frills standard and is easy to read. Each of the monsters comes with its own beautiful piece of original b/w-artwork by Carlos Torreblanca- nice indeed to have at this low price point! While personally, I would have liked to see bookmarks, at this length their lack is something that can be ignored.

Gremlins are nasty critters, as anyone who ever faced a pugwampi can attest to – and these are no different. Nasty, psychotic and mischievous, these little buggers make for great low-level adversaries, drive home the alien nature of some fey and come with several unique signature abilities per critter to boot – all in all resulting in a thoroughly well-crafted supplement worthy of 5 stars + seal of approval – congrats to author Daron Woodson!

You can get these nasty little critters here on OBS and here on d20pfsrd.com’s shop!